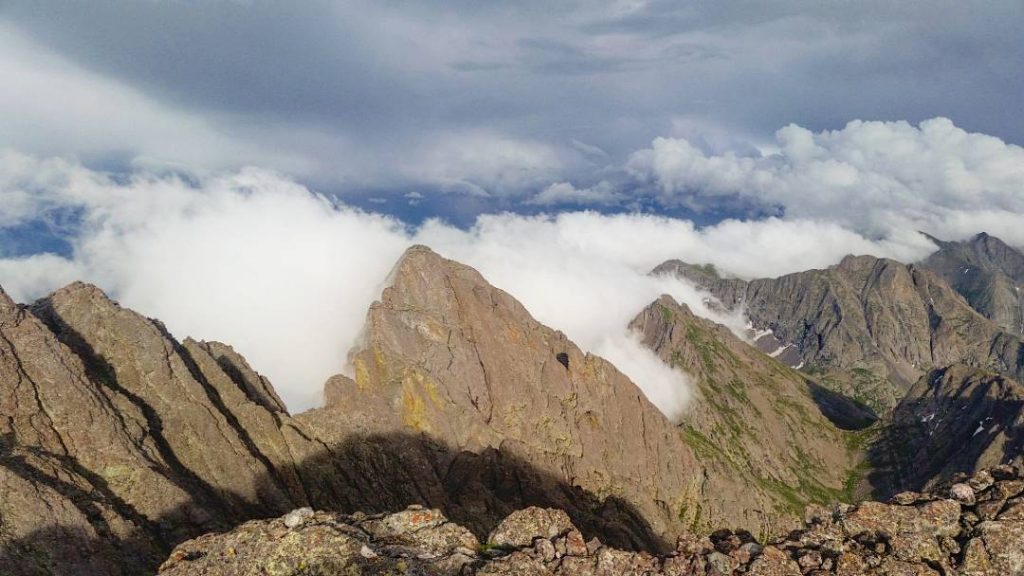 After finishing up the Sierra Blanca Group, it was time to head to the town of Crestone, to take on the Crestone Group. Although the two trailheads I needed to get to are not that far away as the crow flies, there are no realistic roads between them, as  the Great Sand Dunes National Park is in the way.

So, one must ride all the way west to Highway 17, only to ride back east to Crestone. (There may be a realistic route the cuts down my route and gets you off the highway – and Google Maps will even suggest one for you, but I hadn’t scouted one, so beware),

Before I made it too far from the Zapata Falls TH, I hit yet another major storm, and the road I was riding towards the Sand Dunes to somewhat resupply was experiencing a flash flood. Made it to, “The Oasis”, to eat a forgettable/expensive hamburger and buy some overpriced/unhealthy food at the store – and to wait out the storm.

Afterwards, I made my way west on CR 6N. Made a bivy off the road on some BLM land. Ground was almost like talcum powder and was sticking on pretty much everything I own. I hoped that another storm wasn’t going to pass by, or this entire place would be a total mud-feast. Not the best bivy of my life.

Next morning was a good/enormous/cheap breakfast at Hooper, and this is a required stop as far as I’m concerned.

Main highway north was busier than I would have liked, with minimal shoulder, so be aware.

Crestone is it’s own interesting trip – I’ll leave it at that. It does have everything you could possibly need, save a bike shop:  grocery store(s), hardware store, coffee shop, etc, but most of the commercial resources lack signs, so you do have to poke about.

Ride out of town and up to the trailhead was steep – plenty of dispersed camping (and much of it being utilized…). Good crop of mosquitoes at the trailhead itself.

This took several days, and is described in detail in my blog post, Fastpacks From Hell: The Crestone Centennial Enchainment! As far as incredible adventures in the mountains of Colorado, this is way, way up there.

Start of the hiking route featured many people in various altered states of mental being, as well as yet another torrential/dangerous thunderstorm.

The Sangre de Christos have been cleared! 16 mountains down, many more to go.

Onwards! to the San Juans if my legs can handle the 100+ mile ride across the San Luis Valley (I mean, what’s a loaded down century anymore?!) where I’ll trade long, flat paved roads across mega ranches for ATV trails and the great rift zones for volcanic calderas. Currently recharging batteries, resting legs, sipping coffee, drying clothes, and smelling like a dirty hippie! (what better place!) .

120 miles is a long way to transition between trailheads – I’d be in the San Juans for a good while, so I guess it’s best to revel in it.

Back to Hooper, although I think I missed the diner’s opening hours – the store it’s attached to has enough to get to Del Norte – think I just stopped and resupplied at a gas station in Del Norte – ah Tour Divide memories. Took as many side roads from Hooper to Del Norte as I could find. Then from Del Norte you can follow the GDMBR Route (CR 15 towards the airport) a good while to the hinterlands of Alpine, where I spent the night on some BLM land.

In the morning, waited until the grocery store at South Fork opened up – it’s a great store, then rode to Creede. Not many options on route here, and the paved highway has the usual  narrow road and shoulder problems of many roads in CO that follow canyons, so be careful.

Once in Creede, I puttered around town for, perhaps, a little longer than needed at the coffee shop as well as their incredible grocery store before heading up to the TH. I needed food for lunch and dinner this day, as well as the next day+.

Route out of Creede north to the trailhead is a good one – very steep, but off pavement. Somewhat busy with the touron traffic taking in the mining ruins tour. Wave: they’ll think you’re part of the tour!

If you find yourself bike touring through the San Luis Valley and you don’t stop at Hooper Junction.. man, you’re doing it wrong. The breakfast menu is a cyclist’s dream both in quantity and price. Mandatory to add green chili peppers for $0.75.

This took several days, and is described in detail in my blog post, Fastpacks from Hell: The San Luis Trifecta. A very trying fastpack, featuring terrible weather. Looks like at least in Strava I’m missing a few miles of tracks – the weather “encouraged” my GPS to reset itself into a Slavic language and I had a meltdown while stuck in a cloud.

Starting the overnight fastpack into the La Garita Wilderness in a somewhat audacious 30+ mile linkup of the three distant Centennials found in this area: Phoenix, San Luis, Stewart. All are somewhat mild in technical challenges, but the constant rain made the never ending forest+ willow bushschwacking and ridge traverses fraught with difficulty. Wet, slippery, cold!

Miles upon miles of slick talus greets you on your way to Phoenix Peak when approaching from the CDT – that is, after you search through swamp and almost impenetrable forest filled with rotted down trees and moose.

Up on the ridge, I found myself within a cloud, being pelted by constant drizzle, and having my visibility kept to around 20 feet or so. Once benighted, my headtorch made little difference in helping to distinguish the correct route, as the fog would simply reflect back my beam. Even with a GPS, I became hopelessly lost in places, walking around in circles. Once the summit was reached, I had to reverse everything, this time in the dark of a new moon.

Reaching below the clouds’ lower reaches, I found everything soaked from its rain. I must have slipped and fallen at least a dozen times – once in the creek itself, soaking me to the bone.

The willows on the CDT bowed into the trail, and kept me thoroughly soaked. Battling the sleep monster, I desperately looked for what I knew wasn’t there: a dry place to bivvy. With a now failing and flickering headtorch, the search became frantic, as I passed rows upon rows of never ending willows I didn’t remember passing on the way to the base of Phoenix.

Finally, as I passed the last willow bush, and broke through treeline, the rain intensified to a dull roar, and I thought, now or never in setting up camp. The headtorch kept a dim beam, and I wrapped my chilled body into my bag for a cold few hours.

From my bivy, San Luis is less than two miles away, but Stewart is 3 miles more – all done on undulating ridgelines. The day started out innocent enough – cloudy, but dry.

For the at least 10 mile roundtrip, I paired down things Disaster Style light, bringing NO extra clothes, and wearing only running shorts, a baselayer top, wool hat, Buff, and a rain jacket – most everything else was wet, anyways.

The rain and wind started up, then were relentless, and I began to worry that I may develop hypothermia as I negotiated the seemingly endless ridges I needed to traverse to link up these two peaks. The day wore on, but the temps. didn’t rise! The only way to keep safely warm enough was to quicken my pace. I just couldn’t stop moving!

The strategy worked well enough, and I found myself once again on top of San Luis for the second time after starting out ~7 hours before.

On the summit, someone placed rocks in the form of a heart and I lost it: I was actually so happy to be where I was and what I was doing and knew it was an easy downhill to my cache of equipment. My Hiking With Authority turned to full running as tears streamed from my eyes, and soon I had on a much warmer puffy, and a much bigger smile. As if on cue, the rain ceased and the sun peeked out, and I hiked the rest of the miles with a much lighter, but still soggy step, out towards the trailhead.

A nice road ride to a new area (35 Mile Canyon is gravel), although I was stuck in Creede until very late at night because of yet another incredible storm. Wasn’t so into riding in the middle of the night on a highway, but I had places to go. Had to crash at least three times to sleep on my way to 35 Mile Canyon.

20 miles is a long way to go to summit one peak, and I was seriously questioning my commitment to this trip. Also fearing that I’d be stuck in a terrible storm en-route to/from the peak, I brought my sleep system, and would drop gear at specific spots, in an attempt to balance Ready for Anything with, Light and Fast. By the summit of Phoenix, I  had maybe a water bottle. Marmot did a number on my racing vest, which is unfortunate. Fastpack and sleep system were left alone. No real rain fell, so although I was ready, I guess I hadn’t needed to be.

Stayed the night near the trailhead.

A 24 mile round trip just to tag the summit of one Centennial is a trying experience, especially if I’m not sure if I’ll again be caught in a never ending downpour, unable to summit just a mile from the apex of the peak.

Rio Grande Pyramid, #~21/105. The longer I am on tour, the more spiritual the journey becomes. There’s really nothing on top of these mountains – there never was! Yet I continue my pilgrimage despite this fact. The journey is long, fraught with peril and hardships. My legs will never feel fresh until months after I eventually stop for lack of peaks to summit, or I finally succumb to injury. My gear is slowly disintegrating before my eyes. Yet I continue on my Path.

(Track begins at the end of the previous day, as I road < mile to my bivy site)

As highway riding goes, this is some of the best, and the descent down to Lake City is one for the books. Before that, I stopped at literally the only store before Lake City, Freemons, and visited the ancient ladies working the grill and gave them all my cash money, which I had little of (no credit cards accepted) for their breakfast sandwhiches.

Checked into the Ravens Rest (highly suggested), and called it as a reasonably “short day” before taking on Cinnamon Pass. The emotional toil of all these wet, miserable days was certainly starting to add up in a negative way.

The end of Week #2 is a fairly natural section of this entire trip, with all the Sangres completed, as well as a good start to the San Juans. The half day rest in Lake City was very much needed.

Freemon’s. Another must-stop place for a bike touring trip if you find yourself riding the rolling hills between Creede and Lake City; where you’ll enter into the past Americana; where ladies twice your age and half your size will whip up delicious breakfast sandwhiches. I bought one- but would have bought 20 if only I had the cash (no CC’S taken). Mingle with locals, Texans, Texans who think they’re locals, and locals who think this is a part of Texas!