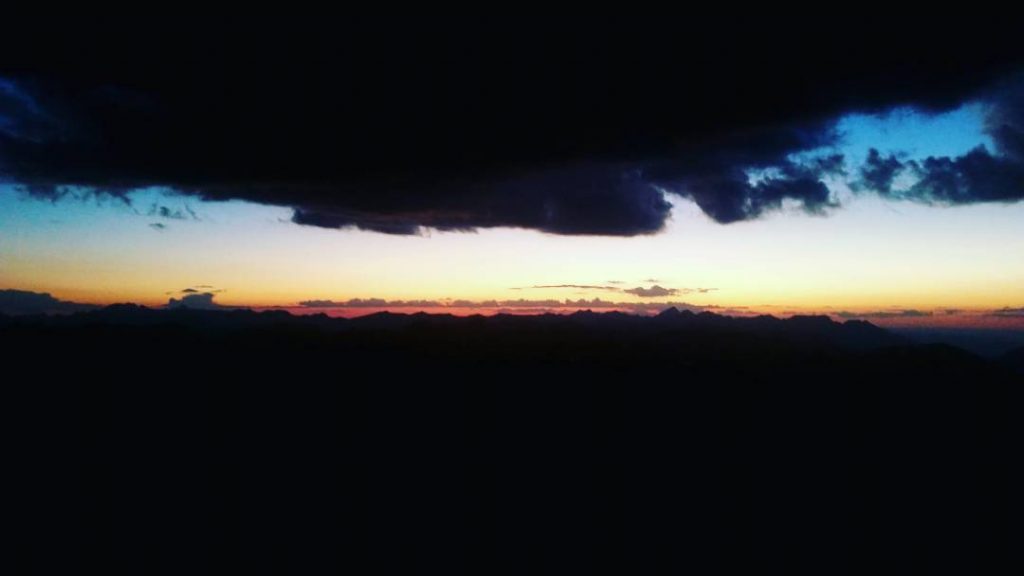 After a brief rest in Lake City (half day the day before, and a half day today), it was time to start moving again.

A relatively late start of the day up Cinnamon Pass Road to Cottonwood Creek Road. Stopped by an ATV-er on Cottonwood Creek, making sure I knew what the Hell I was doing. Oh, sir.

Made my bivy, and realized there was enough time to squeeze in a summit before going to sleep, so I summited Jones. A little lost on the ascent, as I attempted to cut the road a bit, which was a bad idea.

I then cut the road going down, fell and sprained my thumb. Then got more lost getting back to camp. Not my most incredible outing.

The next day I summited Half Mountain. I lost all my food maybe an hour into the hike, which was pretty unpleasant. Route to Half from here was quite overgrown and wild until treeline, where it transitioned into basically cross country, with minor use trails. Much harder than I was expecting. You pass the summit of Half Mountain, but the standard (only?) route starts at least a half mile/mile further towards the Colorado Trail. It’s a bit of a mind-F-.

Small transition ride back onto Cinnamon Pass Road to the Handies TH, which also serves Redcloud, Sunshine, and the two Centennials in the same area.

A somewhat late night hike up Handies. The route is relatively straight-forward, and it was nice to get another peak in for the day, before calling it.

Handies Peak is an understated mountain, perfect from a nighttime ascent. Somewhere in Lake City, I lost the fancy, and unreplaceable battery to my headtorch, but luckily grabbed a pen light from the Hiker Box someone discarded at the hostel before leaving.

It got me down. Roll with the punches, be flexible, use what’s at hand, don’t lament at all the small (and many) setbacks. I feel more like I’m sailing across a vast ocean, then rolling over this rocky terrain. Perhaps that battery is still floating around, when I float on back to Lake City.

These four mountains were a test of will. Imminent death clouds were appearing to the northwest (or so) while still on Redcloud – and quite early in the morning too when my guard was down, but I thought it enough time to tag Sunshine, so I dropped most all my gear on Redcloud and ran over.

Tagged Sunshine, but didn’t beat the storm back to Redcloud, and was stuck on a very awkward slope below the summit as rain, then sleet then snow fell, along with thunder and lightning. Got so cold, thought it best to move and risk getting struck by lightning, rather than dying of hypothermia. The decision to move was not made lightly. 3

Once I had my stuff back, I booked it down quite a ways on the trail, waiting for the storm to truly pass, dried my stuff out as best I could, and went back up the trail to grab the two UN’s to the east. There’s a few bumps on the ridgeline, and I wasn’t quite sure which two I needed, so of course, tried to summit them all. Exhausting.

My timeline was so late because of that crazy storm, that getting back to town before the entire placed  closed at 9:00pm seemed pretty much impossible. Gunned it down the pass, but managed to hit a huge chunk of rock sticking out of the trail, and damaged my front wheel quite badly. Lost my tubeless seal, for sure.

Big rush to fix the flat tire with an inner tube, and cursing myself for being so brazen and over-confident. Slept that night on some BLM land right out of town, fairly miserable and not sure if the bike was going to make over a month of traveling. Especially since I was in the deepest part of the route, farthest away from home, with the worst of the passes yet to summit.

These storms were also just about getting to me. Felt pretty crummy to be so miserable and take so much time/money to do it.

7:45 pm on Cinnamon Pass. Silverton closes at 9:00pm – the whole town, so if I wanna eat, I gotta get there before then. My descent was rapid and I felt confident, but I managed to hit a mother of a rock on the ATV track, which dented my front rim BAD.

Cursing the air, I quickly threw a tube in and hoped tire would actually stay on the rim. If it dramatically came off as I descended, I would go ass over teakettle. I was burning valuable time. Do I go fast, and risk injury, or go slow and play it safer?

I decide to go fast. Even with my best effort, I missed town being open by 5 minutes. The cantina still sat me. Service was blunt, but the burrito was good. Ditched for the night right off the highway, totally drained. The day also saw 4 Centennial ascents, split in half by a rogue thunder snow storm that left the high peaks around me white. I froze waiting for the storm to pass just wearing my running kit, the rest of my gear marooned on the summit, where the lightning bolts played.

I took a day in Silverton to attempt to regroup myself – the weather was getting worse, and much of my time was simply spent inside, watching the rain fall down. The next day, I pedaled the few miles to the Ice Lake TH under pretty depressing skies to try to bag Vermilion.

This area is supposedly one of the most beautiful areas in Colorado, but I was in a drizzling cloud the entire time.  The summit of Vermilion was nothing but depressing. And loose.

I honestly didn’t know what to do at this point, having gotten more and more depressed at the conditions, both inner and outer. I was looking at the largest fastpack of the trip coming up – nine peaks to summit in the Weminuche Wilderness – the approaches were so long that if I couldn’t summit a peak, I wasn’t going to be able to go back and try again. The weather just wasn’t going to get any better, so chance of failure of the entire trip was becoming pretty high.

Even with those odds, I had to give it a try, so I loaded my pack with 5+ days of food, and pedaled up to Molas Lake, to start in on the Weminuche in the morning. Only thing to do though, is try, so pedal up the pass at night I did. Slept near the trailhead.

Death from a thousand cuts. My bent rim handy work from descending Cinnamon Pass, and taking the wrong line.

Tire is staying on the bead but I’ll have to be a bit nimble riding. This is a bit of a timebomb. On Vermilion, I found that my Micro SD card was missing from my phone- how does that even happen?! I rolled back to Silverton and miracles of miracles, found it amongst the dirt, gravel, and woodchips under which I was fiddling with my phone yesterday morning.

These little problems add up, and cause a lot of grief. But, onwards! to the Weminuche under a terrifically terrible weather forecast, to attempt to bag 9 peaks found therein.

Well, after this beer… Silverton is a terribly inconvenient place to scratch.