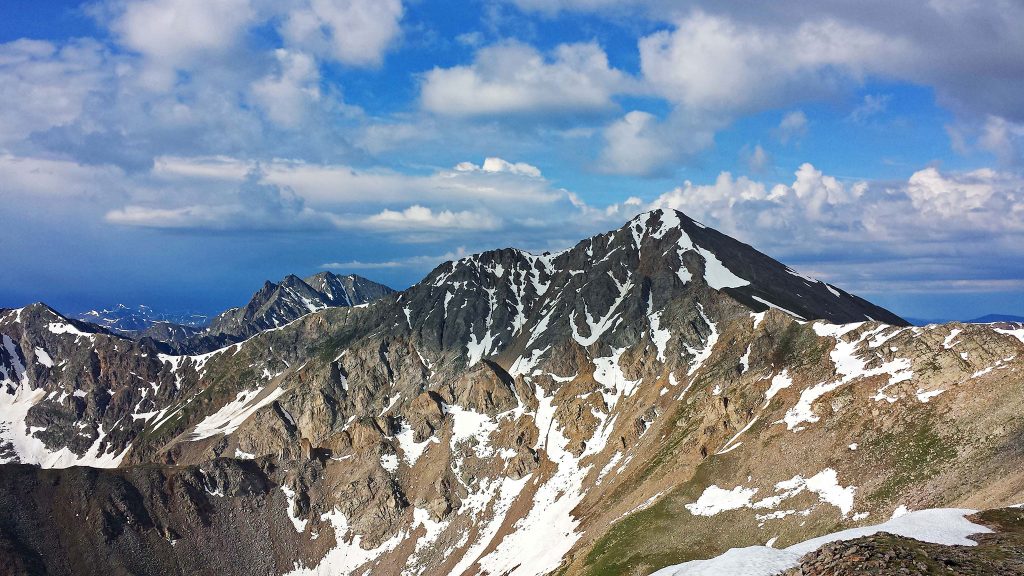 The Colorado Trail is an awesome thru-hike route! But I noticed while hiking the CT, that much of the time that the best parts of an area you hike through just aren’t really showcased. The trail just weaves itself along a contour line below treeline, and you miss out on seeing most of the high country just outside your grasp.

Are you an advanced hiker?

If so, spice up your thru-hike by summiting a 14er or two (or all of them!) you can find right off the main trail! Below, I’ll describe all the 14er routes I’ve taken off the Colorado Trail, and some high 13er peaks that are also easily accessible. Most of the routes of the CT are in the Sawatch Range, between Leadville and just outside Salida. One is located in the San Juans outside of Creede, CO (San Luis).

For most of these routes, I would suggest dropping your main packs, and taking only what you realistically need from the out-and-back summit bid (hang your food, etc – of course). I describe the route mileage as one way, rather than RT, unless otherwise noted.

For some of these peaks, I do suggest an alternative loop which will ascend one route, and descend another, if you don’t mind missing a small portion of the Colorado Trail. For those options, bring everything, but realize that this makes the hike to the summit much harder. Make sure to time your hikes to miss the seasonal monsoon/thunderstorm weather (start early), and be mindful you’ve brought enough food for these CT alts. – they’ll take longer than the main trail.

All these routes are found on this CalTopo map (so bookmark it!), which can also be found embedded, below:

Unless I’ve noted, these are all routes I’ve done personally, so I can vouch for them. Have a suggestion or found a problem? Please, leave a comment, or contact me directly. This guide couldn’t have been done without the original CalTopo map found here, and the many route resources found at 14ers.com.

Using the CalTopo Maps and Descriptions

If you’re on MTB, you can ride to the Southwest Slopes TH, and leave the bike there. Mount Massive itself is in Wilderness, so no MTB’s on the trail itself.

The trail is not well designing for riding, though – it’s more of a “did it for bragging rights”, rather than a destination trail (especially loaded with bikepacking bags). Still, it’s reasonable to ride a little ways past the trail junction, before getting off the bike.

If you don’t mind missing part of Segment 11, you can potentially go up the Northeast Ridge route, and down the East Ridge Route, rejoining the CT right before Twin Lakes.

These three mountains can all be accessed by the Missouri Gulch Trailhead (38.9982, -106.3748) This trailhead is 1.75 miles east of the Sheep Gulch trailhead on Chaffee County 390. Follow the standard routes for each of these mountains (Missouri Mountain, Northwest Ridge, Belford, Northwest Ridge + Oxford) From Sheep Gulch, the summit of Missouri is 6.82 miles; Belford is 5.6 miles; Oxford is a mile past Mt. Belford (link them up!)

La Plata peak isn’t really found very near the CT, but it’s not so far away I feel I shouldn’t include it.

Alternatively, the Southwest Slopes route for Mt. Huron is found about a mile further down the trail (38.9414, -106.4568). It’s a much more rougher trail (unmarked), so prepare for some route finding, deadfall, bushwhacking, and lots of off trail talus hoping and ridge walking.

If you don’t mind missing part of the Segment CW02, you may ascend the Northwest Slopes, and descend the Southwest Slopes route.

Before dropping into the Pine Creek Drainage on Segment 12 of the CT, you can follow a ridgeline west over Waverly Mountain, then to Mt. Oxford, and then finally to Mt. Belford (38.9749, -106.2858). It’s 3.29 miles  to Mt. Oxford, and about a mile more to Mt. Belford. This is a pretty non-standard route, and one of the few routes on this list that I haven’t done myself (so my beta may be flaky, apologies).

Alternatively, you can take the Pine Creek Trail west at the junction with the CT, and access Mt. Oxford via an avalanche path from the south (38.9652, -106.2773). This is part of the Nolans Route, so expect some major bushwhacking, once off the well-maintained Pine Creek Trail – I wouldn’t categorize this as a backpacking route once off Pine Creek Trail – it’s difficult terrain.

From the junction, it’s 5.68 miles to the summit of Mt. Oxford. This is also a non-standard, and rarely used route up Mt. Oxford. It shouldn’t exceed Class 2+. Great camping on Pine Creek.

The shortest way to access Harvard/Columbia is on the French Creek Trail junction, off of Segment 12 of the CT (38.9214, -106.2546). This is not as widely used for day hikers, as it’s easier to access both these peaks from the N. Cottonwood Creek TH (parking lot there). The N. Cottonwood Creek TH is <  mile west from the CO trail (at Silver Creek TH), so it’s viable for this guide to, but first, French Creek:

From the junction with the CT (38.9214, -106.2546), take the French Creek Trail west. It’s 3.3 miles until you reach a point partway between the Harvard/Columbia traverse route. You can then go Southeast from this point to summit Columbia (1.6 miles), or Northwest to summit Harvard (< mile) (see Caltopo map for specific route).

Mt. Princeton’s East Slopes standard route starts right off the Colorado Trail, uphill and North of the Mt. Princeton Hot Springs on Segment 13 (38.7476, -106.1873). Follow CR 322 uphill and south, following switchbacks until an obvious trail junction. From the CT trail junction with CR322, it’s 5.6 miles to the summit. This isn’t a much-lauded route.

Segment 13 is open to MTB, and you can “easily” ride CR322 all the way up past the radio towers, to the obvious trail junction.

Mt. Antero can be accessed by taking the Little Browns Creek Trail from CT segment 14, which you’ll find 6.15 miles from the Chalk Creek TH (38.6699, -106.1817). Little Browns Creek Trail is a wonderful trail, but will intersect with the 4WD road to Antero, which will be a depart from the relative quietness of the CT. I usually hike a little to the east of the route up Antero’s south slopes to avoid the road itself, and come out near the final parking lot, a few hundred feet shy of the summit.

If on an MTB, you may opt to take off after Mt. Princeton Hot Springs and go west up Chalk Creek Drive to CR 277 – a rough 4WD road that will gain you access almost all the way to the summit. The road is popular with 4WD enthusiasts, so don’t expect a wilderness experience. (this route isn’t on the CalTopo map)

Alternatively (and probably: preferably), you can take the South Ridge route for San Luis, also right off the Colorado Trail at Segment 20 (37.9716, -106.9242). From the Colorado Trail, it’s only 1.4 miles to the summit. This is a long route from the closest parking area outside of Creede, CO (West Willow Creek), but it’s much easier to access if you’re already on the CT.

West Willow Creek is also an out-of-the-way access point for the CT and will give you access to Creede for resupply. You’ll most likely want to hitch a ride down from West Willow Creek. The ride up is a popular 4WD route, but it may be spotty hitchin’ a ride.

If you don’t mind missing part of Segment 20, you can potentially go up the Northeast Ridge of San Luis, and down the South Ridge route (Class 1).

Need Something Even More Challenging?! Slow-lans

Check out the Slow-lans route, which travels south to north, sumitting the Colorado 14ers a more direct line. Not for the faint of heart!

7 Responses to “How to Access Every 14er Off the Colorado Trail (CalTopo Map Included!)”