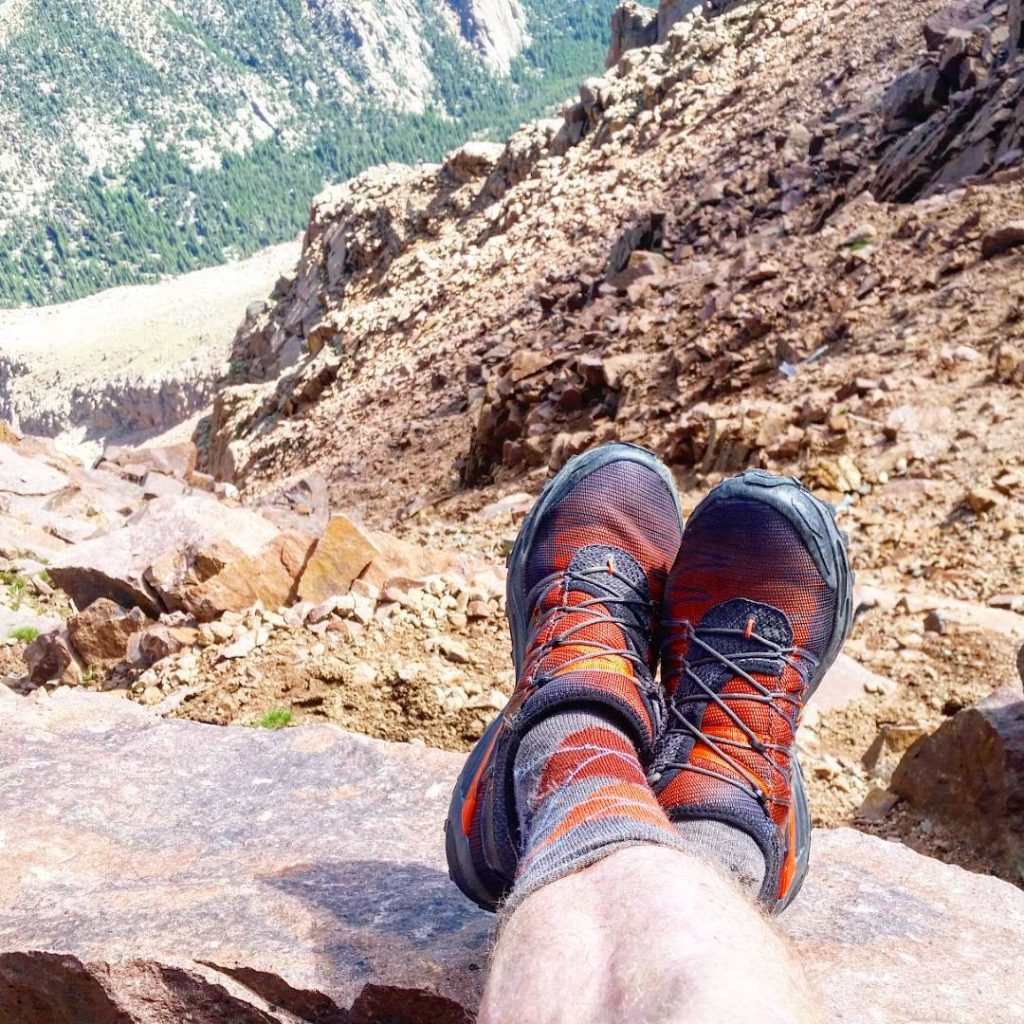 I started out the Tour of the Highest Hundred with this quote:

“I am a frayed and nibbled survivor in a fallen world, and I am getting along. I am aging and eaten and have done my share of eating too. I am not washed and beautiful, in control of a shining world in which everything fits, but instead am wandering awed about on a splintered wreck I’ve come to care for, whose gnawed trees breathe a delicate air, whose bloodied and scarred creatures are my dearest companions, and whose beauty beats and shines not in its imperfections but overwhelmingly in spite of them, under the wind-rent clouds, upstream and down.”

…somewhat auspiciously. I didn’t feel in shape, I felt perhaps too old to be doing this kind of shit, but here I was, lined up to go.

Start time of 3:19am – that’s brutal. Really wasn’t feeling this trip – or any trip (depressed). 160 miles is a very long way to ride a bike to a mountain – and then I didn’t even summit Pikes! This might have felt like somewhat of a retrograde of my performance in 2014, where I summited Pikes on day #1. Who knows.

Got lost around Chatfield State Park, which was really embarrassing. Tried to avoid some construction/traffic, which proved futile.

Visited Dave at Café Velo (and drank some coffee!). Bought some gear at Chris’s shop.

Hit a major thunderstorm while climbing up Highway 24. At least one person stopped and offered me a ride, which of course I couldn’t accept. Ate a ridiculous amount of food at a McDonalds, waiting for things to dry out.

Bivy was slightly off the trail near the trailhead. Not completely flat, but worked well.

Pikes via Horsethief is also a “touch” longer than Crags (4 miles?), so it isn’t any faster. The idea that route is faster in Crags in the context of this project is somewhat of a wash.

Good route though, the beginning is probably rideable – almost all the way until the trail really kicks up. At that point, there’s not much of a trail anyways, and you follow a faint use trail/cairns. The creek you follow turns into a waterfall of sorts, which is quite pretty and a little different than other routes on Pikes.

After the stress of road riding on some fairly dangerous stretches of highway, it was nice to find a particularly lonely, and new to me route up Pikes Peak. Bonus for me was this rushing creek at the choke of this canyon (via the Horsethief TH). It’s always nice to discover something new. Currently in Canon City, waiting out a thunderstorm. Yesterday, I rode through that afternoon’s storm up to Woodland Park. Not really advised.

If I use this TH again, I’ll try riding up a bit – most likely with dropping some gear. That could potentially makes this all a faster route than Crags.

Pikes is always a weird summit to start on – so many people, cars, busy-ness – ugh! I guess best to get that all out of the way.

After 8 hours of hiking, this was 8.5 hours of riding to the bivy area.

The road to Cripple Creek was fine; Shelf Road was awesome. stuck in Cañon City for a little longer than I had wanted as another harsh thunderstorm boomed above me. Grocery store though was stoked with cheap food.

Oak Grade Road was a nice reprieve to ride at night, but man, it feels like it goes on forever. Had to stop where I stopped, as that was the end of any National Forest Access. Checked out the campsite near the road, but it was mostly set up for car camping, as seemed quite full. So, I just bivvyed on the other side of the road in a slight clearing, no big deal. My schedule was such that I just needed to get to Cielo Vista/Culebra by the next night.

There’s Shelf Road the climbing area, but there’s also Shelf Road, the *road*. Probably one the most classic gravel routes to ride a bike on, with crazy interesting geology all around. Crags of pink granite, with limestone crags right on top of them, natural arches, and conspicuously missing: a shelved road! Nice views and drop offs, though. Mind the road! .

A nice century ride, what the hell. Silvercliff is a nice cute little town and a nice place to eat breakfast. Road out of Silvercliff is in good shape, paved, and fairly fast, although there’s a deceiving climb, then descent.

Decided to take a bit of a shortcut: instead of riding all the way on the road to the CR550 junction, I turned onto CR555, which cut a few miles off (at least 5). No good water on that road though, and you can def. feel the sun on your back. The climb towards the pass will also start here, and will continue on the other side of CR550.

A few little glimpses of the Crestones + Blanca group heightens the anxiety that those will soon be visited as well.

CR572 is a great gravel route through interesting terrain, including the Weeping Rock near the tree farm. This is where my water filter decided to break. Didn’t get much use outta thing.

Route pops you right at the top of La Veta Pass. Highway riding, which isn’t ideal, but there’s a nice shoulder, and it’s most all downhill to Fort Garland. Not an incredible amount of services in the town, but the pizza place is alright.

San Luis has a dollar store that’s opened fairly late. Bivvy at the gate to Cielo Vista. Sage (and its accompanying smell), everywhere!

After a brief negotiation with the ranch hand in charge of the Culebra hiking to allow riding up to the four-way “trailhead” of Culebra by bike (they were concerned I wouldn’t complete the ride up, summit the two peaks, and then ride down in the allotted time), I began the ride up the steep, but manageable road. Culebra/Red are interesting peaks, as they’re the only ones you need to reserve a day to summit, and the price is particularly high.

Both hikes went well enough, and I was down and back in town before noon, where I ran into the same ranch hand again. He was in a less prickly mood, so perhaps his initial hesitation was mostly grounded in how early it was in the morning.

Being on Day #4, and only having three peaks completed makes one somewhat anxious, as my target peak/day ratio was actually 1.75 peaks/day (not < 1 peak per day). One of the psychological/emotional challenges of this trip is realizing that peaks summits come in lumps, as do the amount of riding you do between peaks, and it’s hard to understand/estimate progress with few data points.

After completing Culebra/Red, it was time to ride to the Sierra Blanca Group. Resupplying at Fort Garland isn’t the most fruitful, and the collection of food I was able to scrounge was less than ideal. Route to Zapata Falls to the west of the group was a new one for me, and I hoped it worked out. The range is really split in two different sections: west and east, and traversing over from one to the other (and back), is not simple to do, but was still the key to summiting them all quickly. Lots of unknowns.

Ride itself out was fairly mellow, if not boring, and had no real elevation gain/loss until the stiff gravel ride to the trailhead itself. I needed to leave the bike for an extended period of time, so asked the campground host if I could throw it in the woods/lock it a table, or something. They were happy to oblige. I also left them a fairly terribly route trip itinerary and an expected time I should be back, while also explaining that this whole plan was far from ordinary.

Once the bike was put to sleep, I started up the Zapata Falls TH, summited Ellingwood Point, Little Bear, Blanca, “Huefrano”, Lindsey and California in the next few days; then returned back to the trailhead:

This intense fastpacking trip is documented in length in my blog post, Fastpacks From Hell: The Colorado Sierra Blanca Centennial Enchainment!

The Colorado Sierra Blanca Grand Enchainment was beyond my wildest expectations, with some of the best scrambling (Little Bear-Blanca Traverse) along with absolutely horrible/dangerous sections I wouldn’t wish on anyone.

It’s rarely done and I really have no idea if these Centennial have ever been linked in one unsupported trip like this – I’m extremely proud it went, although can’t recommend it to anyone who’s not prepared to face some seriously questionable terrain:

Gaining the Ridge to Ellingwood required a snow climb on rotten snow, traversing onto the face between C2 and C3 (uncharted territory) @ 5.easy; dropping off of Blanca towards Winchell Lakes was not the Class 4 slabs Roach describes, but another death gully I wasn’t sure wouldn’t cliff out; getting from Winchell Lakes to Lindsey’s standard route took three more ridge crossings on talus of all shapes and sizes; and gaining the ridge to California meant finding a weakness in a cliff band 200 feet off the base of the mountain, which turned out to be itself a route of rotten, crumbling ledges covered in kitty litter.

But hell if it ain’t all pretty.