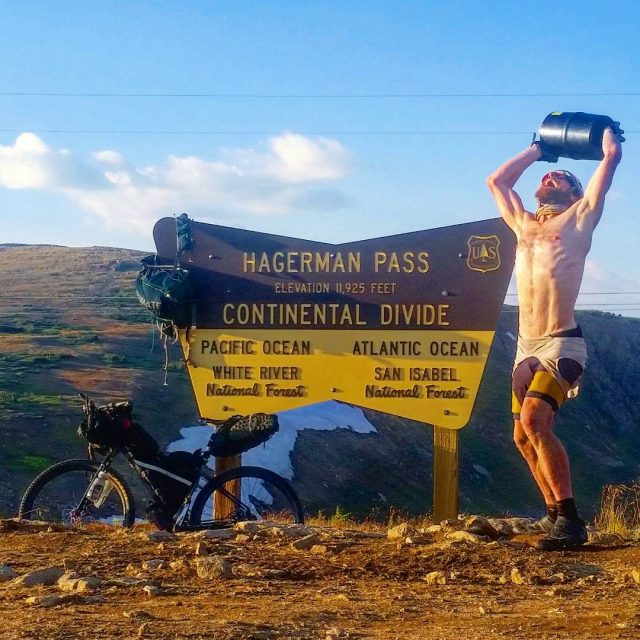 Late afternoon ride to get to the TH late enough to sleep right at the TH.

Out of Leadville on the highway towards Minturn is a premiere road ride and there are also options to take the Colorado Trail part of the way, starting at Tennessee Pass and ending near Camp Hale.

Once you turn onto Tigiwon Road, the route will turn to gravel. It’s a long way to the trailhead. The road used to be quite shaded, but the clear cut of the lodgepole pines has added a significant amount of sun. No real water until the trailhead. DON’T drink the way at the start of Tigiwon, as you’re very near a Superfund Site (Eagle Mine).

This is a great trail run.

Later: Mount of the Holy Cross Trailhead back to Leadville, then to Mount Massive Trailhead

Back to Leadville! Leadville was my home away from home, and by this time I think people were thinking I was a local at the coffee shop. Once in Leadville, and a bit more recharged, I took the ride to TH of Mount Massive (South West slopes).

Elbert, Massive, etc and incredibly accessible by bike from the town of Leadville, and Leadville itself makes a great homebase for two-three day bike/hike missions (or longer). The ride out of town is easy,  and Halfmoon Road is pretty chill, until after you reach the Elbert TH.

From there, it’s a little more rough, but not bad.

Oklahoma is actually one of my favorite Centennials, and the ridge traverse between Oklahoma and Massive is honestly a hidden in plain site classic that certainly rivals something like the Sawtooth ridge between Bierstadt/Evans.

The ridgeline itself can probably go at Class 3, but there’s a very fun Class 4/5 option if you take things directly.

Massive itself is mostly a stroll, but there are a few optional highpoints that can be a little harder, including one highpoint that requires Class 5 climbing, which is a delightful change.

Little spin up the 110J to get ready for Elbert in the early, early morning. This road is too steep for me to ride most of the way. Also has some fun creek crossings. Once you’re up it though, only Jeepers will bother you.

Long day. I set myself up early in the morning for Mt. Elbert’s West Ridge; used rarely by normal people, but used quite a bit on the Nolans 14. This was primarily done in the middle of the night/early morning, so safe to say I had the summit to myself.

The start of the ridge is loose, which takes a star or two out from its classic-ness. Very direct route from my bivy though – just go UP!

Afterwards, I self-re-supp’d at my bivy site, and trotted over to the Frasco/French/Casco ridge to summit those mountains (Frasco is an un-counted peak in this project). Lakawana is waaaaaaaay farther than all the other peaks, it almost didn’t make sense to link this with the line. One alternative option is to summit Lakawana from Independence Pass.

Hit a bit of an electrical storm en route to Lakawana, and had to wait that out. Lakawana is such an underwhelming peak – it’s almost certainly my least favorite Centennial.

Another option to bag all these peaks in one trip is to link Elbert and Casco by first going over Bull Hill, then over Casco, rather than dropped back down. If I was to do this again, I could see the utility of that line, so long as the weather looks good. There’s always a balance between losing/gaining elevation the least amount of elevation, and traveling over easier routes. It’s not always something easily calculated.

Pretty long day of four peaks, so I passed out under my tarp, as the weather finally broke, listening to the pitter-patter of falling rain.

The West Ridge route on Mt Elbert, right before sunrise. Highest point you see here is the summit, and the highest point in Colorado. The route is to simply go straight up! …for 2600 feet.

After Elbert, I was delighted to find that the Ridgeline to both French and Casco had a little bit of bite to them. Here’s looking at Casco from French. The direct line up the summit tower had a fun, slippery slab section to keep me awake!

Back to Leadville! Not even my last time back to Leadville. It was amazing to really think this: but my time on this Tour was quickly coming to an end. I only had about 2 weeks left, and still more than twenty-five peaks left.

At the coffee shop, while eating enormous amounts of pastries and drinking an unhealthy amount of coffee, I wrote out an itinerary for the first time on a napkin:

74 peaks summited! 46 days in. Two weeks to go on the Highest Hundred Tour. What a journey of a lifetime! I’m not a Type A person, but a little drawing of a plan for the last few sounds like a good idea, so here’s some notes on a napkin at a coffee shop, which is really how much planning I’ve done on route.

The Elks pose a formidable crux to the trip, but I’m exceptionally comfortable on the terrain. Movement should be joyous.

Then, it’s just the long grind to Longs Peak, filled with little sleep. LET’S DO THIS! after I finish this carrot cake.

Aspen area via Hagerman Pass. Hagerman is one of my favorite Continental Divide crossings, and I’ve had the pleasure now of doing it both ways. The ride from Leadville is pretty chill, although the road gets a bit rough up top. The downhill to the resevoir makes this a true classic ride, which never does seem to end. Lots of camping oppourtuities, but I would suggest to camp in the National Forest before the reservoir, as a lot of private land crops up, and National Forest access is extremely limited.

The next day, I spun almost all the way to El Jebel to resupply, as there’s really nothing in Balsalt. Afterwards, I slowly pedaled up to the Snowmass TH to get ready to take a few days to summit Capitol/Snowmass/Hagerman.

“BEAR VAULT!!!” I come from a pseudo sailing culture, growing up with an ex Navy Dad, and puttering around on a pleasure sailing craft as a wee lad in New England. On long ocean voyages, strange rituals are often performed when say, crossing the Equator, but I don’t know too many for bike touring.

Crossing the Continental Divide seems enough of an event to provoke something, so I allow myself to show a bit more of an animal side to…the Interwebs, apparently. Another wrinkle in The Highest Hundred: The Maroon Bells Wilderness requires something like this container, if you’re camping in it (which I am), so bears don’t eat out of your pic-a-nic basket and become a nuisance.

I just want everyone to know I’m following the rules like the total Boyscout I am, and this thing is heavy, and is totally destroying my back given its shape – AND I’ve gotta take it up and over the Divide again, back to Leadville when I’m done and-and-and: you’re welcome National Forest Service.

This entire circuit is described in my blog post, Fastpacks From Hell: Capitol/Snowmass/Hagerman (which you should certainly read!) and was truly a highlight of the trip.

The Capitol/Snowmass/Hagerman linkup! Where to start? Fastpacked into Moon Lake – incredibly, found the trail that took me most of the way. Got there under almost a full moon, which made the landscape look quite alien for sure. A special place. There’s no real place to camp, but I found a coffin-sized, flat-enough boulder to sleep out in the open in the Boulder field that surrounds the lake and extends in all directions.

Only soul for miles. I heard Capitol Lake was elbow to elbow. A beautiful sleep and a predawn start up to Capitol Peak – I’ve never seen this lake in the sunlight! Adds to its mystery. After the crappy roadside bivvy on the last little slice of National Forest on the road that leads to Hagerman Pass outside of Basalt the night before, this bivvy was ethereal.

Capitol Peak was a breeze – I took the Ridge Direct route and found delightful, solid scrambling. This should be your route of choice – the “standard” route should be seen as a sloppy sneak-around (in Summer conditions), and absolutely demoted to a footnote on how it used to be done.

One of my favorite formations in Colorado, also found in the Pierre Lakes Basin, this point thrusts out of the talus, which surrounds it in all directions. So metal.

Although I immensely enjoyed my time in the Pierre Lakes Basin (I enjoy the feeling of being vastly and completely alone!), my route was designed to minimize my time there to get quickly to Snowmass.

To do that, I had to cross over the Capitol/Snowmass ridge to scramble up Snowmass’s West Face route. Easier said than done. The ridgeline itself has only been tackled a few times, and goes at a shaky, loose 5.7 S(cary), dubbed, “Satan’s Ridge”.

There’s a hidden lowpoint, but no real pass, so you need to force yourself up over the ridgeline. Stable talus leads to steep, loose dirt with unusable rocks. Each step up rains debris down. But the top is tantalizingly close.

I wonder if the next step is going to bring everything I’m using to support my weight down with me following close behind! I make it to more stable rock (relatively). A slabby section leads to a steeper, blockier face pitch. I move quickly, note that I’m at the crux and pull through without hesitation or pause (or really, fear), and find myself on easier ground- and soon on top of the ridgeline itself. I let out a rebel yell!