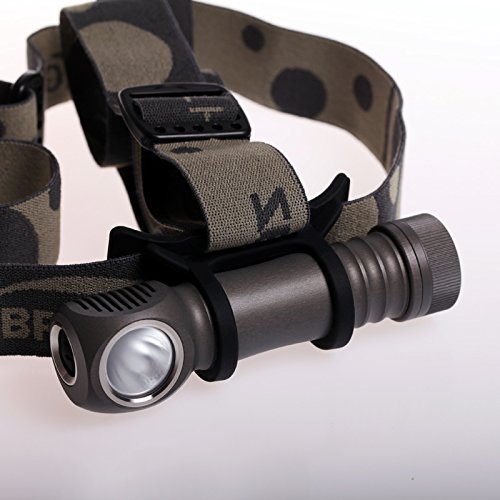 Note: there are many slightly different models of Zebralight H6xxx Mk IV (as well as other models) – they’re compared in this Google Sheet.

I Initially decided to look for a new headlamp after I lost the battery pack on my Petzl Nao. I really enjoyed many of the features of the Nao, including the very, very bright beam as well as (and especially) the Reactive Lighting feature: when you view things close up, the light automatically dims, helping to save your natural night vision sensitivity. The Nao is heavy, bulky, and has tons of straps going from the back to the front. But, I looked past it’s ugly-duckling-ness, given that Reactive Lighting was so useful.

My love affair with the Nao finally went sour for good when I lost the proprietary battery pack in a backpackers hostel in Lake City, while on my Tour of the Highest Hundred. Out in the field, it was impossible to easily find a replacement battery pack for this light, so the Petzl Nao just became something taking up valuable space in my pack, before I finally sent it back home.

Once I was back home and reunited with the Nao, I found it almost impossible to order a new battery pack for it. Even though the Nao was still being sold, the specific model I had was not, and the battery packs being offered wouldn’t work with my model. Even if I could purchase a new battery pack, it was going to put me back about $60 or $70. Considering the battery alone can be found for $5 online, I found the price of the replacement battery pack off-putting.

Clearly, I was in the market for something a little more simpler. Reactive Lighting is a proprietary technology of Petzl’s, and I’d miss it, but I wouldn’t miss feeling locked into Petzl’s battery pack snafu.

Enter the Zebralight H600w Mk IV. It’s also powered by a standard 18650 lithium-ion rechargeable battery and is super bright – ~1400 lumens (insanity). But that’s really where similarities end. The Zebralight is literally an aluminum tube with a screw off end cap that you plunk the battery in. On the other side is the LED, and a button to turn it on/adjust the brightness. Around the tube, is a silicon holder that attaches to a velcro strap to put around your head.

No USB port to program the light via a proprietary app, no distance/light sensor, no cable going from the back of the thing, to the front. That’s a lot of technology that’s actually nice to dump. It’s a light – it should light up things!

I suggest any serious bike commuter (or I guess any cyclist that values their life) to use a head lamp, as it allows you to direct a beam of light at an object – say a car at an intersection. Being able to shine a light at the car is a great way to have the driver of the car – without any question, know that you exist, your position, and your approximate speed.

Having been t-boned by a Jeep, and having the driver of the Jeep tell me that, “they just didn’t see me” makes me very defensive when riding at night these days. I was incredulous when I heard this statement, as I was running a 1600 lumen, handlebar-mounted light, while wearing an array of reflective garments.

Now, I won’t ride a bike at night on busy streets without both, as I find both fill a role in keeping one visible and safer. And with both, I need them to have a high setting for particularly tricky intersections, as well as  lower setting, so that I can use it for hours on, without having to trade in new batteries. See my review on the Magicshine Monteer 1400 for an example of a handlebar mounted light that I find worth your money. A handlebar-mounted light is necessary, as your head lamp is being directed at a variety of things and you need a constant beam pointed straight ahead.

With most helmet-mounted headlamps, one of the biggest issue is: is the thing going to stay on. The Zebralight comes with a fairly beefy strap that goes around your helmet, as well as an additional top strap.

This sucker should stay on.

Have I had trouble with headlamps that just have a strap that goes around (no top strap)? Yes. In these instances, the lamp goes flying off, sometimes into my drivetrain. Then, I have to stop and hopefully find the light again so I can pick it up, and do so before the light – or myself is hit by oncoming traffic. Most often, the battery compartment has flown open after impact, and instead of picking up one fairly large thing, I’m also picking up 3-4 additional small items that tend to roll away – and if I can’t find all them, my light doesn’t work anymore. Stressful.

The silicon mount that Zebralight comes in is easy to remove from the light itself. With a few zip ties, and charitable and well-placed ventilation ports, you could also zip tie the light directly to your helmet, if the idea of these straps turns you away from the light. I find that I light the straps as they are, since I also like using the light without my helmet.

For on-foot excursions, I need basically the same parameters: bright light when I want it and good-enough, long-lasting light most of the time, stay on my head, don’t break in inconvenient ways. For trail running, I like a bright light when bombing down hills. For fastpacking at night, I want to see without a doubt where I’m going. For backpacking (a more casual affair for me), I need a camp light that doesn’t drive any fellow backpackers away from the camp site. The Zebralight has a much dimmer setting, but doesn’t have a red light mode. The dim mode is very dim, so should work in most instances.

Speaking of lack of features, the Zebralight also lacks an (electronic) locking mechanism! But the light can be configured to not turn on, expectantly: loosen the end cap by a very small turn – 1/12th or so. That will keep the internals water resistant, but still stop the light from turning on, expectantly.

Changing batteries in the field is also surprisingly convenient. There’s no need to even take the light off: just unscrew the cap, tilt your head to remove the current battery, pop a fresh battery in, screw the top back in, turn on the lamp, and keep moving.

In general, I appreciate the build of the lamp. I find many head lamps that use a plastic hinge for the battery compartment will in time break. The more complex the hinge mechanism, the easier that it will break. This hinge is usually orientated vertically, so when the hinge gets busted, your light is liable to flop down. It’s just very confusing, in a design perspective.

Speaking of lack of hinges, orienteering the Zebralight up and down is handled by just rotating the entire light in the silicon holder. Once rotated, the light will stay in place. This removes yet another weakness in the design of most headlamps.

The Zebralight H6xxx Mk IV has an MSRP of around $89. The Petzl Nao, depending on the exact model, is around $169.

Each of these images is shot @ ISO 800, F1.8, .5 seconds exposure. The garage is at around 100 feet away. Note that different batteries and number of batteries are used in these various lights.