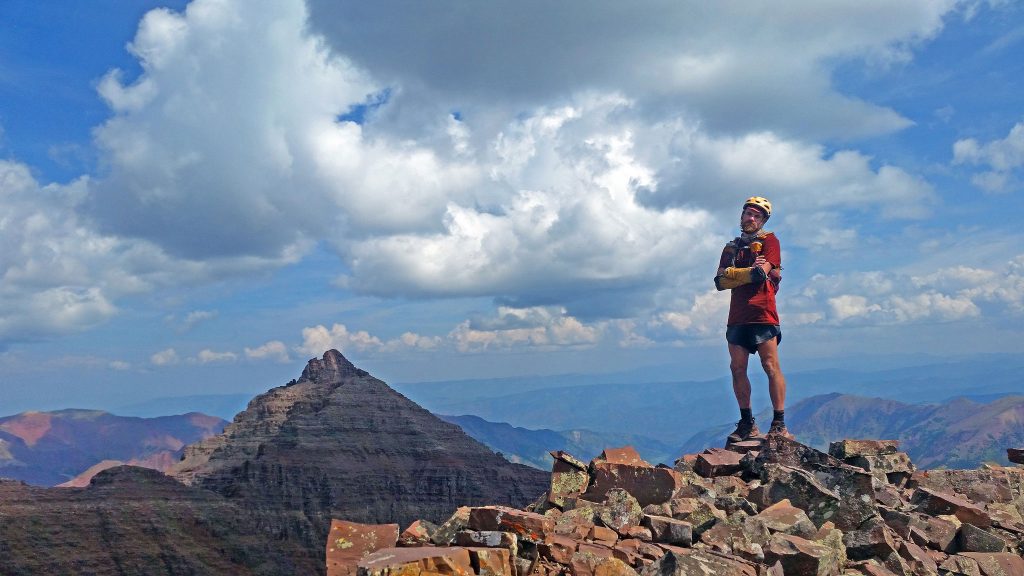 Once Capitol/Snowmass/Hagerman was completed, it was time to do the inevitable: land in Aspen and navigate the strangest of all towns of the Tour (Aspen), grab some food + coffee quickly, and pedal out!

Bivy’d at the TH for Cathedral.

I had trouble actually navigating the bike path system west of Aspen – it should had been something I researched a bit better beforehand. The highway to Aspen is surprisingly large, and wasn’t super fun to ride.

Aspen isn’t the worst town in the world, but I always feel a little awkward hanging in it, as I’m dirty, smelly, and it is a bit bougie. The supermarket in town is a bit small, but moderately priced. There’s a good pizza place downtown I must have visited three times.

Really beautiful area, sad I had to fly through it. The route up the gully to the final ridge is pretty loose and is best to do as a snow climb I would think. If you’re not accustomed to such looseness, be careful – especially if climbing with friends.

You could potentially follow the ridgeline of Cathedral all the way to Castle (see this trip report), but I opted against it, as it didn’t seem like it would save all that much time, and once you’re down off the mountain, there still is the problem of getting back to the bike.

I’ll take a guess and say that Cathedral is named for this ridgeline that looks like a flying buttress you’d find on something like Notre Dame in Paris. The exterior buttresses allowed the space inside to be opened up, allowing more stained glass windows, and light to envelop the interior. I believe Cathedral Peak’s interior is solid rock and quite dark.

One option for the bike route is to come from the south, and take Pearl Pass starting just outside of Crested Butte. This option would give you a lot more camping options, and is yet another way to access the elks. I did this on my Tour 14er, but decided to get out of the San Juans on this Tour via Lake City.

Nice to get #2 and #3 peaks for the day. Pretty terribly air conditions up there, because of all the fires.

Actually spend the night bivvying near the Conundrum trailhead (again). Kind of mis-planned this night – no real dinner! But I did find a beer stuck in the permanent snowfield while hiking down Conundrum, so that kind of became dinner (with some almonds).

The next morning, I got a proper amount of food back in Aspen, then pedaled up to the Maroon Bells. Terrible, terrible air conditions. The road to the Maroon Bells is closed to private cars for much of the day, but you can ride a bike up it whenever you’d like!

The Maroon Bells are some of the most photographed mountains in Colorado, and usually shot from this exact angle. The air quality on my arrival was still abysmal – hard to make out the peaks at all. My eyes, lungs, and throat were not the happiest.

A small hike in to make camp. Tomorrow was going to be a big day.

This track is actually two days. Day #1 started with Pyramid early in the morning. I completely forgot water before I started, but just made due with a little bit of hardened snow I found en-route. Without sourcing water from snow, there really isn’t any water en-route, so don’t do what I did. Pyramid was a breeze – quite fun, really.

Afterwards, made the hike to Maroon Peak, which is a total and complete slog. Traverse to North Maroon was super fun – highlight of the trip really. Somewhat of a slog down from North Maroon, although the route finding near the summit is fun. On my Tour 14er, I actually fell near the Class 4 crux descended South Maroon (took the wrong gully down), but had no problems on this day.

Day #2 was just Thunder Pyramid. I decided against doing the traverse from Pyramid Peak. Doing so may have had saved quite a bit of time – my two days could have been squeezed into one, but it isn’t a traverse I would suggest without recon’ing it. The other issue was just feeling pretty destroyed and weak from the preceding seven works of constant forward motion. I feel that one needs to temper oneself and be hyper-conservative, especially with the end so close! From Thunder Pyramid, the traverse also looks crazy.

Thunder Pyramid did not really live up to its hype. The lower cruxes through the cliffs were easy, and since there was no one else on route, the looseness of the rock wasn’t too much of an issue, as no one was potentially in the way. Super steep for sure, but no big deal. Really fun to be up there.

Back to the TH after Thunder Pyramid.

A very stressful night up on Independence Pass, once out of Aspen. I was too tired, it felt too late, and that damn road is too fucking narrow to navigate by bike. Didn’t feel safe, so bailed before making it to the pass for a few hours and completed the ride up to the summit of Indy as the dawn broke. Then, a ride up to the TH for Grizzly.

Independence Pass is a classic road ride, though. I would encourage anyone doing it from the Aspen side to, perhaps, not do it in the middle of the night, though!

Very interesting peak – one of the highest Centennials-that’s-not-a-14er. I was completely and utterly spent on this mountain, and moved very slowly. I knew I’d perk up later, but this was really a day I was starting to feel the tour in earnest.

Feeling a bit Grizzly Adams on Grizzly Peak. Hard day today – legs are finally starting to feel that deep fatigue – slowest hike so far. But! Sawatch are finished! Up and over Mosquito Pass and onto the final stretch of the Tour! ETA 15th!!! .

Final time in Leadville. Spent the night well below Mosquito Pass in another strange bivy spot surrounded by old mines and prospecting holes. Kind of a short day, but I was whipped.

Mosquito Pass itself is one of the highest passes of the trip, so it’s another highlight. Second pass over 13,000′ – the third and final pass would have to be completed next week.

Afterwards, road towards the Kite Lake TH and bivy’d in a patch of National Forest.

Mosquito Pass! The second of three 13,000’+ passes on my Highest Hundred route. It’s hard to easily define this project – people understand summiting the 100 highest peaks, but getting to them means taking a tough bikepacking route of over 1600 miles, carrying all the gear I’ll need for TWO MONTHS. Not much time to recover – mentally or physically. Feeling a bit tattered, but happy the end is in sight! For the third day straight, I’m in a different mountain range. I’m running out of mountain ranges to visit! .