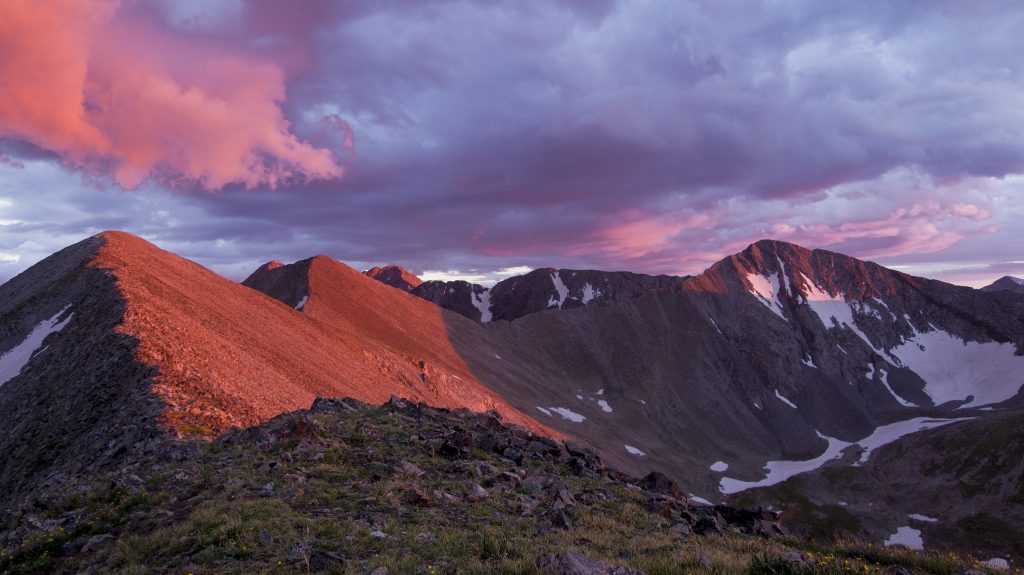 Time to tally up all the successes (and failures) from this year’s (mis)adventures:

Goal: Fastpack from Lake Como Road to Salida (pavement to pavement), staying on the ridge from Little Bear/Blanca to Methodist Mountain. Do it solo and unsupported, as fast as possible.

The Sangres Range Ridge Traverse was my biggest project for the year. It was a long time coming – I had wanted to do it the year before, but time constraints and forest fires in that area had prevented me. I also choose instead to do a similar-but-different challenge: the first known traverse of the Mosquito/Tenmile Range from Trout Creek Pass to Frisco, also solo and unsupported.

I almost scrapped the Sangres for this year, as the snowpack in the area was so great during the timeframe I had penciled in to do it, it was far too snowy to even be realistic.

Taking a gamble, I waited an additional month for snow levels to go down to reasonable levels, putting my attempt smack dap in the middle of the heavy mountain monsoon season, leaving me fairly vulnerable to intense lightning storms that strafe these mountains it seems: constantly.

Astonishingly, I ran into very little weather for the entire 120 miles, and got ‘er done, being the first to do the line wholly solo and unsupported, from paved road to paved road, while also ticking a few more peaks than my predecessors.

It is really hard to describe just how awesome this ridge route is. The classic Little Bear to Blanca traverse – one of the Four Great 14er Traverses is just one part of it and comprises only a single mile of the 120 mile route. Another Great 14er Traverse: Crestone Needle to Peak is also a part of the route. There’s a dozen more knife-edge sections of similar difficulty, with more surprises along the way.

Goal: do my very best.

In 2018, I started a new gig as an assistant backpacking guide with Andrew Skurka. Not one to pass on the challenge, I jumped into the role with back to back to back trips in the High Sierra of Kings Canyon NP.

In 2019, I again had a wonderful season guiding backpack trips, staying almost three weeks in Alaska, and doing a week in RMNP.

Alaska was an experience in of itself, and I could certainly see myself spiriting away up there for the rest of my life. The highlight of the trip for me personally was the Arrigetch, and helping lead our group up Ariel Peak, which is literally the only non-technical way into the Arrigetch Basin from the south.

This area has some of the most difficult hiking you could imagine, where trails are but only in dreams dared to be imagined inside our mosquito-proof tents, late into one of the Arctic Circle’s summer softly sunlit midnights. In their place, we all relearned how to merely survive walking on the spongy tundra who’s constitution should always be called into question yet which defines the lowland travel.

RMNP was a different sort of vibe for me. I’m an expert at very specific parts of the Park (notably: Longs Peak), but the Park west of the Divide I’m not as familiar with. I was able to add a little more to my knowledge, and set my eyes on a few more future goals.

This summer I also wandered about the Mummy Range, completing the classic Mummy Mania and equally classic Blitzen Ridge climb.

Goals: Flatiron Classics in 53 hours + Top Ten in a Day

The Flatirons essentially define the landscape of Boulder, Colorado. Dozens upon dozens of rust-colored conglomerate formations rise up from the city’s foothills, luring its residents to wander up, down, and around their low angle east faces as well as far more serious positions.

Peter Bakwin had it in him to do ALL the guidebook Flatiron Classics as fast as possible, and I was silly enough to join him. The 53 Flatiron Classics range from Class 3 to 5.8; from a single pitch-length to twelve+, and we thought it tidy to try climb them all in around 53 hours.

We were most civilized in our strategy, as we planned that after each day’s effort we would merely go home at night and sleep in our own beds, then get up the next day, rather than questionably bivy out on say: the top of a flatiron on the down-low.

But the sheer lunacy of the project was in Peter’s complicated and super-optimized line to link them all up. Steep hillsides with cliffs and crags peppered throughout, mixed with healthy fields of poison ivy lends themselves only to a scientific mind to crack.

Between large projects, we’d do reconnaissance of the climbs themselves. I learned how to set up a top rope soloing system. Even with all this preparation, there were still routes I hadn’t done and had to onsight while we were in the moment, adding to the stress of the day.

In the end though, we failed at our goal – mostly from me tapping out only on day #2 of 3. It’s hard to describe just how worked a body can get clambering on these silly stones. The bottoms of my feet and palms of my hands buzzed for days on afterwards from so many miles of climbing.

We did go back a week later and complete all the routes we had planned to do on day #2, and with a previous recon trip or two prior, I became a lifetime Flatiron Classics finisher, earning me the award of. “Dr. Flatiron” per Gerry Roach’s book. All told, it took four separate trips for me to achieve this illustrious title.

The terrain in/around the Flatirons is honestly so unique to this one locale and it’s hard to really communicate what goes into an attempt like this. The 53 Flatiron Classics have been linked up in a row only once before.

Peter and I did one more outing this year before the snow started falling in earnest – this time completing the Top Ten Flatiron Classics in a Day. I had no idea how rare this was to do – for some reason, I had it in my head that it done every other week by one of Boulder’s super fit and highly motivated outdoor athletes – the type of people that simply lay waste on the sides of streets like so many pairs of climbing shoes. To wit: we seem to have been only the 13th known party to complete it.

Goal: Finish in under 60 hours

I started strong on Mt. Shavano, but the weather grounded me at Mt. Harvard while I was suffering a fairly difficult asthma attack.

I’ll probably be back. Third time’s the charm, right? It was a wonderful experience though, much better than my first go-around, and I enjoyed my time in Salida and Buena Vista doing my recon.

On a lark, I rented a fast bike (well faster than my Surly ECR), to test my fitness up Longs Peak, prior to my Nolans 14 run. The round trip to/from Boulder and up Longs Peak strictly taking the Keyhole Route (no trail shortcuts) took only 9:20:10. I had beaten my last PR set in 2015 by 37 min 50 sec, which I was pretty happy about. I was back by basically lunch time.

The FKT website isn’t tracking the Keyhole Route FKT right now, but in 2015, my trip had the FKT for this variation (I’m probably not going to submit it).

Bikepacking to the Colorado 14ers Guidebook

Sometimes you have to ask yourself: what’s one subject that you know more about, then any other person on Earth? For me, that’s easy: as I’m essentially the only person who’s repeated the self-powered 14er trip twice – the second time though I did the Centennials, so tack on an extra 47 peaks!

Roughly, the planning for a trip like this took about as much time as actually doing the trip itself, and it seems best to not forget all this beta, but transform it into something others can use themselves, which is an adventure in of itself.

The book is being openly written right now! Some chapters: