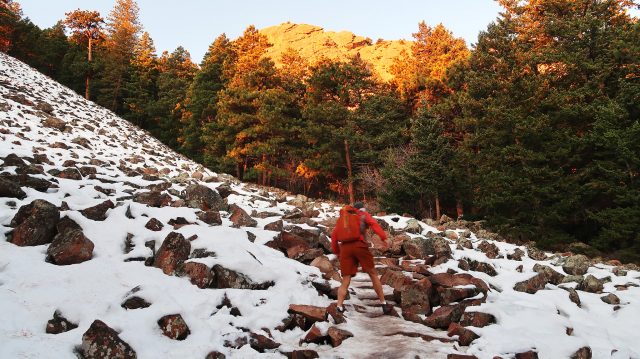 I was actually going to mention this day only in passing in my training journal, but realized that it’s not actually an itinerary altogether done that often. If I am to believe Danny’s trip report (which lists a history of completions supplemented by Bill Wright – one of the keepers of such records), the Flatiron Classics TTIAD linkup has been done only a few times.

Climb all the Top Ten routes in one day, and you’ve done the the Flatiron Classics TTIAD linkup.

Of course local legend and hard man Buzz Burrell was the first to essentially do the linkup – and completely in-character: he made it his own by swapping one the easy routes: Stairway to Heaven, with the much more harder and devious route: Satan’s Slab, way back in 1990.

I’ve copied Danny’s list of completions from his trip report, although I removed instances where different routes were swapped below:

Most all these eleven completions can be commented on with copious amounts of awe, but there are few standouts: Bill Wright’s first completion is certainly impressive, especially since it took over a decade since Gerry Roach published the first edition of, “Flatiron Classics”, which the list was first compiled, for someone to do the top ten in a day. Bill Briggs is such a silent crusher, and his incredibly impressive solo at a speed that roughly halves Wright’s time is truly impressive, only beaten by Darren Smith in 2017 by a few minutes (although doing so as a roundtrip, which hadn’t been done until Gilbert + Rigeb). Bill Wright’s repeat with Danny in Winter also was a long time coming, and was also down roundtrip.

Maybe before I agreed with Peter to attempt this linkup with him, I should have done my research and understood the rarity of the completion, as I have now done aprés our attempt. Peter and I recently failed (I peaced-out before day #2) at attempting to set an FKT in doing all 53 Flatiron Classics – the first day required us to do twenty seven routes!

Related:  Daily Camera: Rock on replay: Boulder man climbs up and down Second Flatiron 20 times in one day

My mindset going into our top ten attempt was that this would be a long, but moderate day. So nonchalant was I, that I couldn’t have even told you what all ten climbs were. How wrong I was. Even though the number of climbs was low, the mileage and ground covered was much expansive then any one of the three days we scheduled to do for the 53 Classics.

I was so casual in my preparation for this day, I essentially didn’t do any. I sprained my ankle running the three whole miles from the gym recently, and had decided that this was a great excuse to give myself a big break for movement on my feet. In fact, I haven’t scrambled anything flatiron-related in over a month, save one bumbling hike up Freeway (a most-easy route) on the Second. Peter and I joked that we’ll probably be done by lunchtime.

I have been extremely active at the climbing gym and most likely had my strongest bouldering day last Thursday, two days before our linkup was scheduled, but pulling power and strength on steep terrain means nothing on <= 5.7 flatiron endurance routes that range from 50 degrees to 90 degrees in pitch.

On Satuday at 6:19 am, Peter I set out from Chautauqua, towards the First. I still get a bit nervous on its first few pitches and being so out of condition for anything flatiron or hiking-related didn’t help. But it would be a good barometer for the rest of my day. Thankfully, the first pitches felt relaxing, which helped calm me down for the rest of the day.

The direct traverse over to the Third was time-consuming, as the boulders, talus, and trail were snow/ice covered. Peter and I didn’t bring any sort of traction, but both brought a pair of Sportiva Mutants to switch into for the hiking, keeping our TX2‘s relatively dry for the scrambling.

Scrambling the Third’s east face is delightful and so cruiser as to defy true description. Peter and I set up our well-practiced top rope setup for Friday’s Folly: we brought two, 30 meter ropes, set one up for rappelling down to the base of the climb, and the other already set up at the anchor to top rope from. Friday’s Folly is covered in jugs to spare, and the crux traverse from west to south faces is more mental than physical.

Once we were both done completing the route, we combined ropes via an EDK and rapped off towards Takin’ Care of Business – the awesome 5.5 chimney on Green Mountain Pinnacle and via another slog off-trail through snow covered rocks, and bushes. Happily, the emotional low point of the whole day for me – I was a bit over all the slogging, and planned to raise my voice of bailing if we should encounter another one – so thin was my skin for suffering.

Takin’ Care of Business is usually a fun romp, but today I had forgotten how to actually do the chimney pitch, having to defer to facing climbing the northern wall in some spots – a dicey move as keeping limbs firmly stuck on both walls is what makes the route safe and easy.

But we got the route done, and other than forgetting my sunglasses at the base of the climb, without incident. Onwards! Peter led the descent to the Royal Arch trail, both of us bracing ourselves for a snow slog. Thankfully, the southern-facing slope lacked the dollops of snow covering all the small terrain traps usually found off trail, and we made good time down. I filled up my bottle at the surprisingly flowing Tangent Spring, and we traveling cross country right before Royal Arch proper to the summit of Stairway to Heaven.

I was looking forward to Stairway the least; the last time I was on the rock was during our 53 Classics attempt, and it was the second to last route of the day. At that point, my hands and feet were yelling at me to stop, and having to downclimb a 1,000 route also wasn’t on the list of things I wanted to do this weekend.

Today’s downclimb though went faster and much more smoothly – I corrected some of the route finding blunders from my last go, and we were both at the bottom of Skunk Canyon, ready to hike up to Back Porch. Peter started a dialogue on what our Top 20 list would look like, and opined that it would include good routes that made logical linkups, such as the Achean Pronouncement, which we hiked just to the east of. Impressed enough with the idea, I was almost game to climb the 5.7 route, rather than hike in the snow.

Back Porch as a climb is growing on me – the movement is interesting, albeit a bit thick with trees in impossibly awkward places. Nice and steep, too – good foot position seems to be the key in making the climb go well. We rapped off the back without incident, and down Dino Mountain to the Mesa Trail. The next classic was Pellea, all the way up Fern Canyon, so we had time to rest our endocrine system.

Mesa Trail was mostly a muddy mess, but no matter. Fern was surprisingly dry and ice-free, thankfully. Pellea’s east face went quickly, we rapped off the back, and braced ourselves for the long slog to the Fatiron. Seven classics down.

The Fatiron is a wonderful climb – remix the First and Third together, put a random rappel in the middle, and you’ve got it. It’s far from any busy trail head, so don’t anticipate that many other people on it. Conveniently, it makes a great approach for the Maiden – most likely our hardest climb for the day. I found it very enjoyable the first time Peter guided me up it.

The Maiden though, can be harsh for the ill-prepared. The first true roped pitch is funky to say the least: set up a top rope anchored by an aging pin, and a small nut, and with that mostly psychological pro, traverse a blank section of the wall. Once called “The Pendulum Pitch”, the pin was initially put in so that one could swing through a blank section of the wall using the rope, rather than climb.

Related:  Miles on Freeway - Running 20 laps up and 20 laps down on the Second Flatiron

I was having a very hard time finding a needed hand hold (or two – or three), as Peter kept telling me there weren’t any and just climb without them. 5.6 my hind quarters.

But not as inconvenient as the second pitch, which Peter led once more. Between the almost full 30 meter traverse pitch, he placed NO protection, making a fall result in a criminally long swing off the north face of the Maiden for either of us. The climbing, although bizarre, is easy enough, and we put the rope away for the last bit of east face climbing to the summit, enjoying the 115 foot free rappel off the severally overhanging west face.

One more Classic to go. Unfortunately for us, dark is the night, and the night was falling upon us quickly. We manage to hike to the base of our last climb, the North Face of the Matron, just as the sun had set.

With head torches ablaze, I did my best to lead the last hard pitch of the day. It’s a good pitch, with a fun roof to overcome by meat hooking a massive spire of rock jutting out. I made it to the end of the pitch, and do my best to set up an awkward anchor comprised of a nut, slinging a measly tree, and putting a cam the wrong way in a sandy crack. Everything is a little smaller than I’d like, but I have confidence Peter can follow the pitch without pitching off, ripping out the anchor, and killing us both. He does, we pack all the gear and rope, and solo the rest of the climb to the summit of the Matron under an almost full moon, high over Boulder.

We manage not to bungle the two rappels needed to get off the Matron, and get into the rhythm of the 5 mile hike back to the car. Finally, we can let our guard down, and enjoy the painful soreness in our legs. We’re not even at the trailhead before I tease Peter that we’ve only got a little more than a month before we can attempt this whole ordeal in calendar Winter.