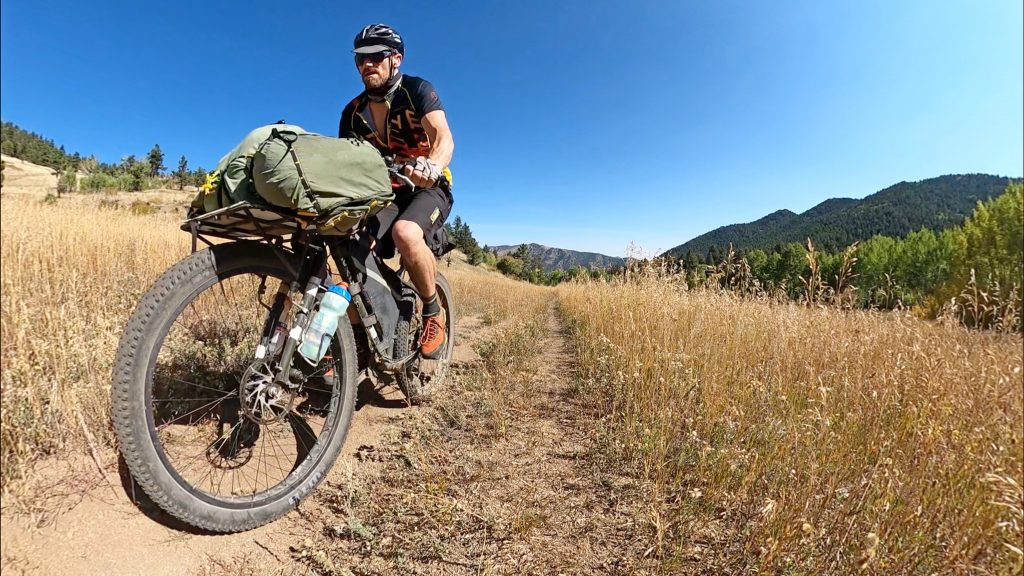 2021 was a tough year to get through – but I tried to make the best of it! Long, self-contained adventures are already my main jam, so it was easy to adapt to the topology of 2021. Here’s some of the favorite trips I took out in Colorado. I took a TON of footage this year, and am still editing down a lot of my adventures – if you haven’t already, subscribe to my Youtube channel to get notice of when those videos premiere!

The Ultimate Elbert to Massive Linkup

A perfect micro adventure trip for me, from start to finish!

Being car-free, it’s not always easy to get deep into the mountains without a little planning beforehand – and that sort of planning is it’s own mini project! Luckily, Colorado has the Bustang (and other regional bus systems), so it’s actually possible for me to leave around noon and ride a few blocks from my house in Boulder to grab a bus to Denver, then to Frisco, then to Leadville (Yes: three buses to go 104 miles – it isn’t perfect, but it’s perfect time for napping1). And from there, it’s a ~10 mile bike ride to the Mt. Elbert TH. The road to that trailhead was actually closed to cars, so I had what’s usually a very busy place all to myself to get an amazing sleep underneath the stars for a proper alpine start.

The plan was simple, yet unproven (as in I couldn’t find any information on anyone doing this itinerary before): summit Mt. Elbert (the highest peak in Colorado) and continue on the connecting ridgeline to Mt. Massive (the second highest). If completed, one would make a enchain the entire Half Moon Creek drainage and connect these two peaks in the most roundabout way.

A challenging day for sure! Along with the two high 14ers, there are two Centennials to summit, as well as Colorado’s highest named hill, Bull Hill. To make things extra interesting, the mid point of the whole route features a very chossy ridgeline off of “Frasco Peak” linking into Mount Champion. And no water sources on route.

Before the sun came up for the second time, the route was completed and the loop was closed – topped off with doing the Massive Mania route all the way down Mt. Massive’s enormous southeast ridge (rather than just taking the standard route Class 1 trail down), garnering me a few more high points for the day.

Back at the trailhead, I snoozed for a few hours in my comfy bivy, got up in the morning, packed up my camp and rode back to Leadville with enough time to spare to grab coffee before catching the bus.

The latter trip was something I had thought about doing for years, this trip was a completely spontaneous idea. The night before, I was waiting on my Leadville Trail 100 runner to pace them on the last part of the run. They unfortunately didn’t make the cutoff into Twin Lakes, so I crashed for the night a little ways up the Parry Peak Trailhead with some minimal overnight gear and a running vest filled with supplies needed to run to Leadville. In the morning, I decided to recon Mt. Hope for a future guidebook – take a nice, fun, easy trip – you know? Stretch the legs.

While on Mt. Hope, I spied a ridgeline off to the SW that would eventually wrap around to La Plata. Although the ridgeline looked slightly menacing, I decided to wander that-a-ways and see what it was all about. Turned out to be good fun, with a ton of surprise challenges in the form of positively enormous towers of choss to navigate up, down, and around.

I haven’t heard of anyone else doing this linkup either! Funny, how I find these lines… Once I finally summited La Plata, I still needed to descend the standard route to the highway, then run the paved miles back to my bike! Once at my bike, I had no food, and more importantly, no water (and I brought nothing to filter water). I was too late back to Twin Lakes for anything to be open, which was crap luck for me.

My first Big Project for the year was to be another long ridge traverse fastpack across the very ridge of the Continental Divide, as it crosses the Sawatch Range, but before then, I wanted to do some recon trips to check out some of the more difficult sections. Good thing I did, since one, one-mile piece of ridgeline between Birthday Peak and Mt. Harvard proved to be impossible for me to traverse. Without being able to do that one mile (and not wanting to skip this crux by leaving the ridge entirely), I decided to put this 6+ day trip on hold until I can properly traverse this piece of ridgeline.

But it wasn’t all a failure, I had an incredible time learning some of the Sawatch’s more interesting alpine secrets. The ridge between Huron Peak and North Apostle is actually breathtaking, with many difficult parts and unclimbable gendarmes to navigate (tons of loose crap, too!). North Apostle’s northeast ridge is a hidden classic in my book – and a perfect example of a Sawatch route that defies the idea that the Sawatch peaks are nothing but heaping piles of talus.

I took the liberty to sleep atop of Mt. Yale – another 14er slept-on-summit for me to tick – and seeing the Birthday Peak to Mt. Harvard ridgeline up close and personal was worth it, even if I couldn’t scramble it myself.

I was also delighted to inspire not one, but two people to take on their own versions of the Sawatch Continental Divide Ridge Traverse – both making the adventure their own, which I’m more than proud to hear were successful in their own ways. Here’s one of the trip reports.

That one mile segment still awaits a first known traverse.

I’ve ridden a bike now dozens of times to/from Longs Peak – probably more than anyone ever! But the majority of my trips have always taken the same paved highway route from Boulder to Lyons, then up St. Vrain to the Peak to Peak Highway. It is a classic road route, but there seemed that there could be so much potential for a route with more dirt in it (and way less car traffic!). So I finally sat down to design an MTB route to the trailhead to Longs Peak that I felt was worthy to ride. Now only to ride it (and make sure it works)!

Before even getting out of the city limits, I was on OSMP singletrack to the Boulder Valley Ranch trails, then linking up Joder Ranch to the Boulder OHV, then to Slaughterhouse, Sourdough Trail, and finally the Bunce School 4WD before you get spat out back onto the Peak to Peak highway. To my delight, Ferncliff sprouted a hole in the wall taco joint, which made a perfect place to have dinner before my bivvy for the night.

After my hike, it was time to go home, and after some hemming and hawing, I decided to check out the Johnny Park 4WD track which would take me down to Highway 34 near Pinewood Springs (and perhaps pie at the one and only shop it town) and from there, an easy downhill road route back to Lyons. This route turned out also to be worth doing, although traffic on the highway was severe – St. Vrain is currently closed to traffic, which put more pressure on this route. From Lyons, it was unfortunately more road riding back to Boulder, as the Heil Valley Ranch area can’t be ridden through due to repair work from the fires – but once you can, linking up with Johnny Park would make a great route to/from Longs Peak!

If such cycling/bikepacking routes are of interest to you, I’m creating a guide on how to bikepack to all the 14ers in Colorado! There’s a complete guide to the Front Range 14ers, as well as an entire route network just for Longs Peak!

I’ve been meaning to do Gash Ridge for forever, but my trips haven’t ever been designed to utilize it, until I decided to go out and make it an honest goal. Getting to the Blanca Massive meant also going up Lake Como road, and this trip was also my second time doing it by bike, which might put me in a very small club of people dumb enough to do it not once but twice. Gash Ridge proved to be an excellent route – one of the best easy Colorado alpine routes I’ve ever done. Bonus points for also checking out Little Bear’s West Ridge Direct and my fourth time on the Little Bear/Blanca Traverse. So good! The last time I was in this area, I rushed through on my all-time Sangre de Cristo Range Ridge Traverse, so it was nice to take a little more time wandering around the area with a ton more freedom to just do what I want.

Once done with my fastpack, it was time to go home, and back on the bike, I tried to force a route north to Crestone, which I completely failed to do! Aww well, there’s something magical about riding a bike in the middle of the night on quiet back roads, totally lost.

Who knows what 2022 holds for me, or anyone! But I’m psyched to start dreaming up the next set of adventures!