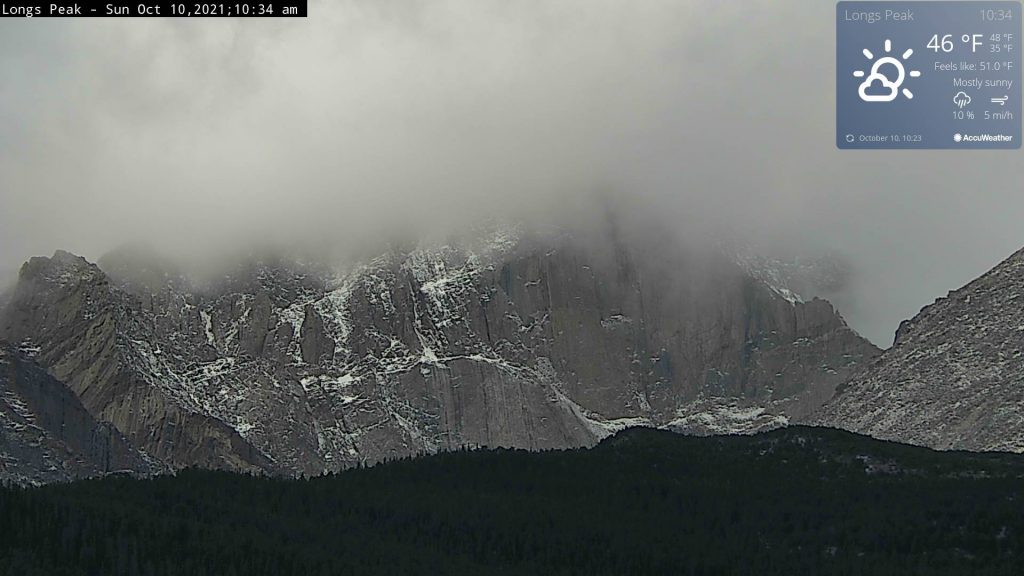 It’s that time again, where I’m looking for weather windows between systems to try to summit Longs Peak! I’ve summited Longs Peak in every month of the year by many different routes – usually with an approach by bike!

Here are resources that I use:

This webcam points mostly at the enormous east face of Longs Peak, but you can get a good idea on conditions of the North Face (Cables route), the approach to the Keyhole, as well as the Loft. What it won’t give you clues on, is the conditions of the west side of the mountain.

If I look at the webcam shot above, I can tell a light dusting of snow fell the other day, but not enough to really impede travel for the approach.

The climbs are going to be a whole ‘nother question and a harder on to answer, as I can’t tell if there’s been a build up of snow in small cracks, etc. In the above photo, the summit is in a cloud, but it does look like the cloud is going to move on with a little time, so I’d check back in a hour or so.

Mountain weather forecasts can be wildly inaccurate, so I try to keep that in the back of my mind. I look for precipitation forecasts a few days out, as well as temperature. Wind is also very important to pay attention to – there’s been more than a few occasions where I’ve been turned back simply because of wind! Make sure you’re using the correct units; MF seems to default to using meters and Celsius.

Mountain Forecast breaks down the weather report by elevation, which is also useful once you roughly correlate it to areas and landmarks on the mountain. For example, the East Longs Peak TH is at ~9400′, whereas MF has a forecast for, 8203’/2500m. Chasm Junction is at ~11,400′, similar to MF’s Mid forecast.

The biggest issue in the Winter for me is precipitation. The more snow that has fallen, the better the chance that I’ll be moving slow. Snow falling a few days before I want to plan a trip means higher avalanche probability. I’ve found the forecast in MF for precip. feeling a little, “worst case scenario”, when compared to other services.

If I want to summit on Monday, I’m going to expect a very, very cold summit for October – 27 degrees F! That’s so low, that I may cross reference this forecast with another service like weather.gov and do a reality check.

Winds at 15mph are usually doable, it gets a little miserable for me after 20-25 mph. Snow isn’t going to fall until Tuesday and then the weather window for me would be closed up. until at least next week.

weather.gov is a good resource in general for weather and good to cross examine information given on Mountain Forecast. Looking at weather.gov’s temperature for the summit of Longs Peak, they’re forecasting a high of 32 degrees F, also pretty cold! I better bundle up.

The terrain of Longs Peak is very, very complex, and the way the wind loads in these upper slopes makes getting a good idea on what’s loaded dangerously just isn’t something that can be described in CAIC’s forecast. This is exasperated by the fact that the most popular summer routes: Keyhole and the Loft, spiral around almost the entire mountain, or more technical routes usually use the north face Cable’s route as the rappel route. This means you need to know the snow conditions for most of the mountains, and at various times of the day. This is very difficult. In general, if the avalanche forecast for the Front Range is not looking good, I stay home.

I’m usually doing solo missions to Longs, I take the avalanche report really seriously. Usually I’m looking at the avalanche report when trying Keplinger’s Couloir, which is a straight sourthwest facing gully and that makes it easy to read an avalanche forecast for it. Once at the top of Keplingers, I’m interested in what the south, then southeast forecast could be.

Good place to gleam some on-the-ground information on the approach or even the route you’re doing. I do have to put it through my own personal experience filter, as I usually can push through conditions that others would turn back on. Still, if people are reporting that they were microspikes from the beginning of the trail to the Boulder Field, I know what to expect for a few miles, and that’s useful.

Photos that are tagged with locations, or just seeing what friends/buddies are doing is sometimes the best resource for on-the-ground conditions reports. Instagram’s geo-tagged collections can be really helpful:

(There are other geo-tagged collections, but they are of lesser of use)

See my other post on Mountain Trip Safety: What I do Before I Go for more advice and suggestions.

Why not just helicopter to the top and be done with it all? Could bag several mountains in a day via that method! 🤣