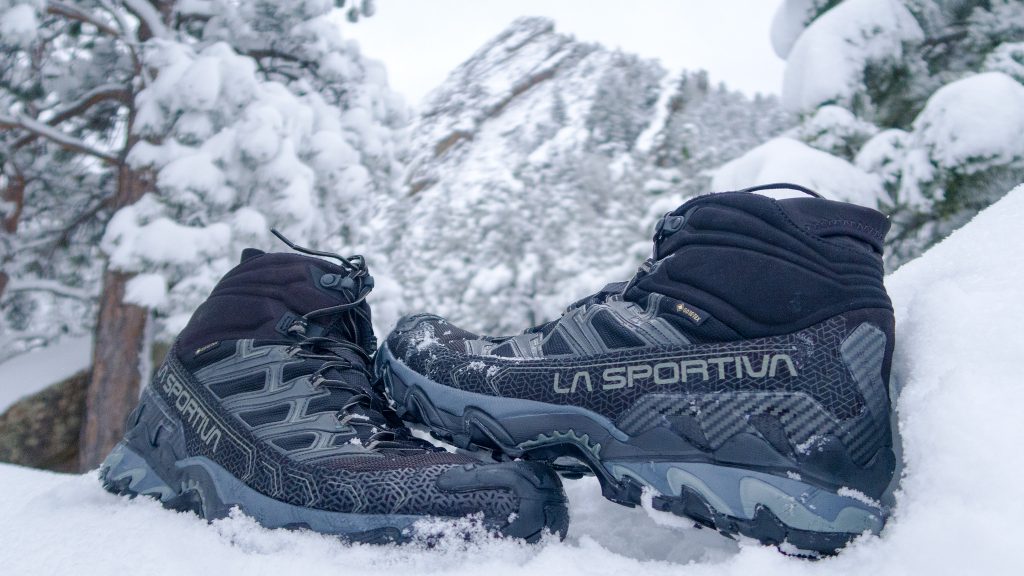 La Sportiva recently released a new take on their reputable Ultra Raptor trail runner: the Ultra Raptor II Mid GTX. Building upon the battle-tested base of the current Ultra Raptor model, it adds a few new features and flourishes: mid top ankle cuff, Gore-Tex upper, a new black and grey colorway, and it comes in regular as well as wide sizes.

Rather than being a conventional low-top trail runner, the Ultra Raptor II Mid GTX is a mid-height trail runner/hiker – the line on which I’d categorize it myself is pretty blurred. It features a Gore-Tex upper and – sit down since this is almost a first for Sportiva: it comes in both regular and WIDE sizes! Rejoice!

If you’re already a fan of the Ultra Raptor, you’ll find the Ultra Raptor II Mid GTX fits practically the same, as the last (Tempo 2) is the same, and the upper similar – just you know: taller, with a nylon cuff that adds an additional shoelace eyelet. As far as I can tell, the mid and outsole are also the same as the Ultra Raptor as well.

I myself don’t fit all Sportiva models – the Bushido for example is too narrow of a shoe for me, but I do fit into the Lycan I and II, Mutant, Blizzard GTX, and a few other models pretty well. If any of those shoes fit you well, size the same as those.

The new hotness is that this shoe is available in WIDE sizes. I haven’t put on a pair of those myself, as the regular fit is good enough for me, but if you’ve always demurred away from La Sportiva because of a too-narrow of a fit, here’s a model to take a serious look at. (The Nucleo High II GTX hiker is also available now in a wide size – perhaps we’ll see more La Sportiva models coming in wide in the future?)

So what would you use the Ultra Raptor II Mid GTX for?

The Ultra Raptor II Mid GTX is the perfect shoe for sloppy conditions, like the ones we’re experiencing here in April on the Front Range of Colorado. Depending on the elevation and terrain on even the local hills, I’ve been tramping through fresh snow, climbing up wet trails, and traversing over ankle-sucking mud – all in the same day. The mid top allows me to hike right through even the most muddy of trails, rather than trying to sneak around the worst of it (tsk tsk, the keepers of LNT will rightfully finger wag at me), while keeping my feet nice and dry. The all-black colorway won’t get too tarnished from such abuse either – rather the mud will act upon the upper as nothing but a hard-won patina.

I’ve also used the shoe for snowshoeing. The mid-height of the upper works well with a strap binding system of snowshoes – I feel that the straps bite less into my ankle and that the padding on top of the shoe does a good job with protecting my ankles from these straps.

The same can be said for pairing these shoes with a hiking crampon, like the trail running compatible models Kahtoola puts out. The upper strap will rest on the upper of the shoe, rather than digging into my foot. I use these hiking crampons extensively when climbing up couloirs in the Spring. I’m quite excited to use the Ultra Raptor II’s now for such missions.

The upper of this shoes won’t act so much like a gaiter when it comes to keeping snow out of the shoe, so if you are planning to post hole for hours on end, I’d suggest pairing this shoe with an actual gaiter. A lightweight trail running gaiter may not reach the top of the shoe, so pick out a short gaiter made for hiking boots instead. The Ultra Raptors actually fit a gaiter well, as the outsole has a depression in front of the heel to allow the strap to lay flush with the sole, rather than stick out, where it’ll get damaged over time.

If you are looking specifically for a Winter GTX trail runner with a built-in gaiter, look no further than the Blizzard GTX. The Ultra Raptor (OG and II) also don’t have a chunky outsole or the built-in spikes the Blizzard GTX has, so for running on snow with the Ultra Raptors, you’ll want a pair of microspikes.

Rocky and Off Trail High Routes

The outsole is perfect for scrambling on wet and dry rock – far better than the chunky Mutant, which you may want to wear down a bit to get that perfect balance of tread that the Ultra Raptors already have out of the box. For one of my Nolans 14 attempts, I picked the Ultra Raptor for its comfy upper and sticky outsole as a stared down endless miles of talus.

Running! How does it?

Other than the small amount of weight added by the top part of the upper, it feels just like the regular Ultra Raptor (343 grams vs. 470 grams) and most definitely not like a heavier hiker which may feature a stiffer midsole and outsole. And obviously, this isn’t the shoe to wear during a competitive Vertical K (try the VK Boa). The Ultra Raptor II Mid GTX shoe is made for variable conditions and all-day comfort.

You will get a small amount of extra ankle support – especially if you tighten down the laces, but without a stiff sole of a hiker, it won’t feel like a cast – which in my opinion, isn’t what you want. I champion ankle mobility – let the ankle flex, keeping your knees from having to take on that job, which they do a very poor job performing.

What you’ll really get is more protection for your ankle from debris, and additional warmth from keeping things out of the interior of the shoe. And since you have the choice to utilize the upper eyelets (or not), you can adjust how much of a loving hug you get from the mid top to reflect the terrain you’re traveling in.

Transitioning Away From Heavy Hikers

For those looking to move away from heavy hiking boots towards more of a trail runner, the Ultra Raptor II GTX could be a great stepping stone. As I mentioned earlier, you’ll get a lot of the benefits of a mid top shoe, as well as a ton of benefits of going to a trail runner: generally a lighter shoe all around, and a super sticky outsole care of the FriXion XF 2.0 rubber and soft/flexible outsole, You may find that a shoe like the Ultra Raptor II GTX is a perfect compromise between the two.

I live in Colorado, and hiking 14ers borders between hobby and cult religion. Many shod with traditional hikers have opine’d that a trail runner won’t work all too well, as sharp rocks and talus prey upon such bare-to-the-world ankles. Well, with the problem solved, the Ultra Raptor II GTX Mid may now be your new favorite shoe.

I know I’ve personally wouldn’t have minded a trip or three where I didn’t come out of the hills with ankles that looked like they’ve been through a street fight, so I may find myself using them for my own fastpacks.

For such long trips, it’s usually a question of when – not if, I roll an ankle and then to what degree of severity I’ve sustained. Having the option to lace up a little tighter high up my foot sounds like a nice bit of insurance to continue on my intended high route line.

A Gore-Tex upper make sense for a mid top shoe, as it systematically works with the added height of the upper to keep your feet dry inside the shoe. For hiking/running in wet/muddy conditions, I’ve found this shoe to work super well, even when taking it on day-long snowshoes through a Spring blizzard.

If you’re planning on a multiple day trek through a downpour, or going through multiple creek crossings, consider that once the inside of the upper gets wet, it’ll hold on to that moisture for a good while before totally drying out – same with most all Gore-Tex uppers.

If I were to join an Andrew Skurka adventure as a guide through the tussock-choked shores of the many rivers that spider through the valleys found in the Gates of the Arctic of Alaska, I would probably choose the original Ultra Raptor over the II’s (and instruct my clients to do the same), as I know I’ll have wet feet within a minute of leaving the float plane anyways and there would be a small chance that my shoes will dry out by morning.

For hikers and runs that last a few hours to a day close to home, this is less of a worry, as I can always dry my shoes at home for the next day’s tramp. Stuffing a little newspaper/paper towels inside helps with collecting that moisture if a roaring fire or space heater isn’t available.

What’s to become of the OG Ultra Raptor?

I’ve heard nothing of discontinuing the Ultra Raptor – it’s a super popular model with a rabid following that I call myself a member of. Rather the Ultra Raptor II Mid GTX will complement the original Ultra Raptor, both happily filling their divergent niches.