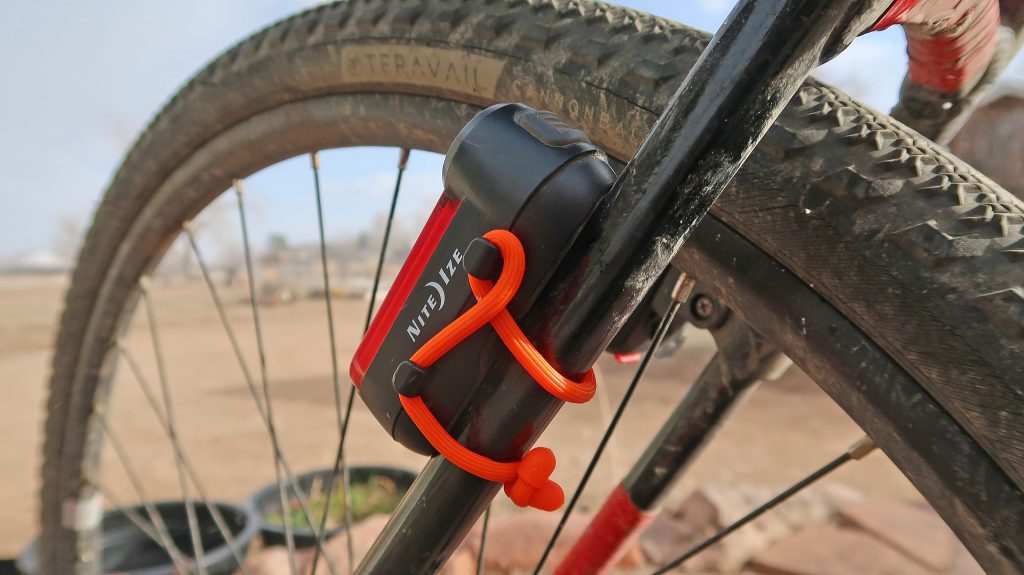 Note: these products were provided to me by Nite Ize to demo without caveat. I would like to thank them for their generosity. All opinions are mine. Interested in me checking out your gear?

I’ve been familiar with the Nite Ize brand for a long time, as I’ve found various Nite Ize displays in many in-store locations, including at my local supermarket, the Apple repair shop, outdoor gear stores, etc. The company is also locally based to me, with headquarters in Boulder, CO. My former housemate even did contract design work for them – and sometimes Nite Ize products feature her modeling their gear!

In the past, I’ve had a mixed impression of the products, thinking them more impulse buys of middling quality than something I would take more seriously. I generally like simple, bombproof gear, that does its job well. When I’m bikepacking for example, I just don’t have too much room or patience for fluff. Maybe my initial apprehension came from where the products are located in-store, or what I perceived them to be: keychains and keychain accessories.

But delving further into their product line, I found that this isn’t actually the case. My opinion changed when I bought their SpokeLit (admittedly: impulsively) while buying a new bike as just a silly fun accessory. And it was silly and fun. But also useful, well-built, thoughtfully designed, worth my money, and solved an actual problem: being more visible on a bike from the side. Now it’s a permanent fixture on my bike.

Maybe I was quite wrong about these products? This post highlights are a few products I’ve been trying out, and I’ll have reviews on the waay. If you don’t know who I am and what I do, I’m a cycling, and mountain running enthusiast that doesn’t own a car and that will mold my opinions on the gear I’ve been testing as well as how I’ve been testing them:

A nice, compact, simple, and bright front bike light – and bonus: looks like a mini sci-fi phaser! The light is USB rechargeable (kit comes a micro USB cord), and has indicator lights to let you know when it needs to be charged (red), as well as when it’s done charging (green). Comes with mounts for both handlebars and a strap to attach to a helmet, by wrapping around vent holes.

Quite a big discrepancy between High and Low in run times. Low is quite bright and realistic to use for most of its duties, so save High for specific purposes like high traffic areas.

I personally recommend running at least two front lights in high-traffic areas: one mounted on your handlebar that’s very bright and is used to see in front of you, as well as a helmet-mounted light that swivels and shines wherever you’re looking. In a commuting setting, this is helpful when you’re turning or simply looking at side traffic. While bikepacking, I’m usually looking around at night for a campsite besides the trail.

I use the Radiant 750 light myself as my secondary light and mount it on my helmet. The light’s beam pattern works great as a spotlight as I’m barreling down a 3,000 foot descent in the middle of the night. On High, it’s so bright, that I need to be courteous and redirect the beam it puts out away from oncoming drivers. If I’m riding a bike that I don’t have my main bright light mounted on, swapping this light from my helmet mount to the bar mount is painless.

Construction, is simple in a good way. I know that if I cracked it open, I’d find a 18650 battery in it that could itself be replaceable and if I could bring multiples of those batteries, I could prolong its run time indefinitely, but that asking a whole lot for a package like this and keeping things sealed while also helping keeps things simple and more waterproof. (I tried opening up the case to confirm, but there are proprietary bolt heads that defeated me!)

The Magicshine Monteer 1400 is the only light I’ve ever found that’s both rechargeable and has a port to be recharged without popping out the batteries. That light is significantly more expensive, and fills perhaps a different niche.

The bar mounting system works well. I’m usually worried about strap systems for handlebars – I’m tough on gear and tend to snap them. Mounts that attach via a plastic band ratcheting system should be absolutely avoided.

The Radiant 750 uses a rubber strap on its handlebar mount system which is thick and has withstood my abuse. The belt notches in the rubber are sized well for 31.8mm bars, and should fit a wide variety of both smaller and larger diameters. If you do somehow destroy the rubber strap, it’s potentially DIY replaceable with another strap of your own making. I always look for ways to bush-fix my gear in case I break it on trips.

There is a fair degree of built-in swivel on the mount, but I haven’t felt a good reason to use it on a handle bar. On the helmet strap, it can come in handy if you’re strapping down job is a little wonky. Usually though, I just crank down the swivel-y bits, using a phillips-head screwdriver.

The helmet strap also works well. My current go-to helmet is a road helmet, and its style is one of not-so-many vents up front, so the mounting is a bit farther back than I’d like, but things work well enough.

I’m a big fan of the Day Safe Flash mode for riding at night riding, as it’s lets loose a bright stream of red light blinky anarchy upon those behind me. The other modes are non-blinky modes curiously, as most rear red lights are designed around the idea to primarly blink.

The run times are somewhat short – but I’ve found the Day Safe Flash to be more like 4 hours, rather than the stated 2hr 50min. Because of these low run times, this light may not be the best light for bikepacking, as you’ll just need to recharge the darn thing constantly, but a great light for around the town/commuting, where recharging your lights is just an impulsive thing to do at the end of the day. The trade off of the low run time is a really bright light – there isn’t even a low light setting. I find I use this as my secondary blinky light when I’m riding in the middle of the night on busy roads.

My biggest worry was the mounting system, as the light uses two stretchy bands, which I use myself to affix the light onto a seat stay. I’ve had experiences with other lights that use similar bands, and the bands themselves tend to break apart easily. Some points on this particular system: it uses two bands, and only one is really needed, so the chance that your light will fly away forever are very low. The kit comes with an extra band, so if one breaks/gets lost: you’re covered.

Finally, it can be replaced with a DIY piece of stretchy cord you can buy for about 25 cents a foot at a well-stoked mountaineering store, or using one of Nite Ize’s own Gear Ties. For someone like me that breaks things often, I may replace the cords myself the next time I’m at Neptune or Bent Gate.

I’ve also had pretty terrible luck with rechargeable red blinky lights in general. These lights tend to get a fair bit of abuse because of where they’re mounted. I’ve had the micro USB port get gunked up and unusable, and buttons on the lights fall off. For non-rechargeable lights, I’ve had the lights split apart, spilling the contents all over the road, or just coming home with the mounting part, and no light part.

I’ve yet to have any problems with this light, but it does make me a little hesitant on purchasing an expensive rear blinky in general if, at the end of the day, it’s basically a disposable item. The Red Radiant is most likely a good buy, as the build quality is better than most I’ve used, the light is bright, and the price is realistic.

Your classic, simple head torch, with a few nice features. Rechargeable via USB, and contains an indicator light to let you know battery charging levels. There’s a few different lighting modes: white spot, white flood, and a red flood. Both white modes have a high and low settings as well; red does not.

I use this light as a backup light to my other arrays of lights, and as my trail running light. The light would work fine as a backpacking and in-camp light as well, although not being able to fine tune the brightness of the light is probably its biggest weakness. In large groups, it’s nice to have the dimmest light you can get away with.

The Radiant 250 doesn’t have a lockout mode, but the newer Radiant 300 DOES – when purchasing I’d go with the 300, as it’s this light’s descendant.

The spot and flood modes also can be turned on/off independently, which is somewhat curious, as you can run both the spot white light, and red flood light, which makes little sense. I’m sure one of the trade offs is internally, the circuitry is much simpler.

I don’t think this product is the strongest product in the Nite Ize line. It is simple, gets the job done, and is well made – all things I like, but there’s no standout feature that gets me jazzed. I am interested and curious to see what Nite Ize comes up with in the future to differentiate it from its competitors. If you find yourself needing a solid head torch, and see a Nite Ize display, you may luck out with grabbing the Radiant 300 out of a choice of far less ideal candidates.

The market for head torches of this size is quite large – go to any outdoor gear shop and see their displays, but I do myself normally gravitate towards my Zebralight, which is MUCH brighter, longer lasting, and has a replaceable battery (but is twice the price). Ultimately, these two different form factors filled different niches – the Zebralight would be intolerable in a campsite setting, so when I bring it backpacking, I also have to bring something like the Radiant 300 anyways. Like rear bike blinky lights, one of their problems is that they’re so easy to lose, and investing in disposable items is somewhat of a gamble for absent-minded people like myself.

See my full review of this curious accessory. As much as people talk about the merits of front/rear-facing lights, side lighting is far less attractive a topic to even discuss, and there are far fewer products to choose from.

Was this gear spotlight useful to you? Leave questions and any comments, below.