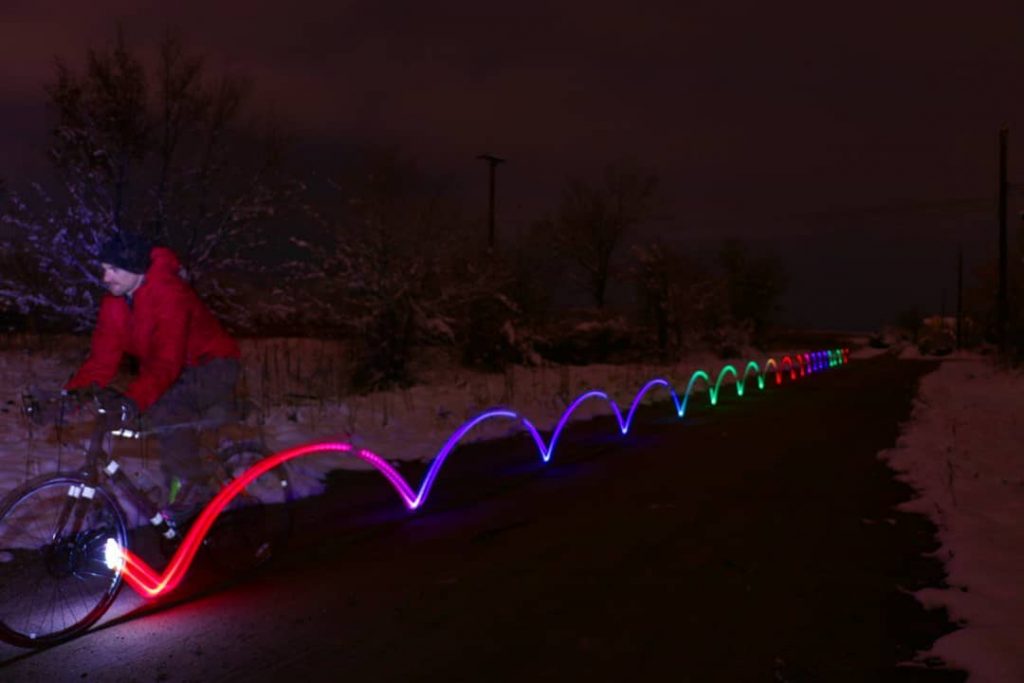 Note: this product was bought by me at retail. All opinions are mine. Interested in me reviewing your product?

A few weeks ago, I was enjoying playing hooky from work on a long bicycle ride in the mountains. This day was a little more special, as Rocky Mountain National Park had recently closed Old Fall River Road to cars – it’s one of the few gravel roads in the Park or in any National Park in the lower 48. But it still was open to bicycles, hikers, and leashed dogs. The Park only does this a few weeks out of the year, so when I heard that time was now, I took advantage.

I was enjoying myself immensely: passing other cyclists, walkers, and their dogs – all which got copious amounts of head scratches. I passed one hiker on my left slowly (the steep grade and 50 miles of pedaling already in my legs made sure of that) and exchanged with him the same pleasantries.

“Hey, weren’t you the guy riding his bike in Lyons this morning? The one with the colorful, crazy light?! That thing looked awesome!”

I was taken aback. That was me, 30 miles ago back in the pre-dawn darkness. To get from Boulder where I lived to Lyons, and then to Estes Park to enter RMNP, one has to ride a network on paved highways, with speed limits up to 55 mph. To state the obvious, on a bike: you want to keep visible when your ride starts at 5:00 am.

Enter the Nite Ize SpokeLit Disc-O Select Rechargeable Light. Admittedly, an impulse buy I grabbed when picking up my new bike, but what harm would it cause, I thought: to try it out?

I was meaning to experiment with side lighting, anyways. Usually, when people think of bicycle illumination, they think of a bright front light, and a rear blinky light, and well: that’s it. But from my experience, this leaves a cyclist vulnerable to not being highly visible from the side. A cyclist riding on the street and a car pulling out into that same street from another road, driveway, roundabout, or parking lot is a scenario that happens all the time.

In the past, I’ve relied on a passive system: reflective tape. I would apply this expensive and cumbersome product to the fork and frame of my bike, as well as on my bike helmet. My night-time and bad-weather winter clothes and bike bags also are made with reflective fabric. My wheels had sidewalls with reflective material. Any lights projected my way should be reflected back to it’s source.

That outta be good-enough, right?

Well, I thought so too, until I found myself in stunned disbelief one snowy night in the back of an ambulance, trying to fill out a police report with a sprained wrist, right after an intimate run in with the swiftly moving grill of a Jeep (the rest of the Jeep was of course moving just as fast, right behind). Amazingly, I came out of the situation relatively uninjured: just that wrist, and a bruised hip. My bike though: didn’t make it, having taken all the force of the impact, which somehow traveled through my hip, then released via a set of cracked chainstays.

A close call for sure.

I’ll never forget though: the driver stated that they just couldn’t see me – I was in the middle of a roundabout with all my expensive bright lights and reflective tapes, accessories, and fabrics. To say I was angered by this statement in my heightened state of adrenaline would have been an understatement. Whatever I said back to this gentleman made the police officer and EMT crew separate us, and I never saw the driver again. By some good grace, the driver was running a dash cam; the footage corroborating with my side of the story.

Nevertheless, I took this nightmare scenario to heart, and promised I would attempt to be even more visible while out riding at night. But how? How much more visible could I make myself out to be? How much more reflective tape could I possibly add to a bicycle? How much brighter could a front light reasonably get?

The real answer didn’t come from bright lights or expensive tape, but a simple side light system. At first blush, the Nite Ize SpokeLit isn’t a very impressive light. The light isn’t terribly bright when compared to my front light, the mounting system (or lack of one) seemed like it would fail at a moment’s notice, the colors the light would pulsate through seemed more at home during a half drunken cruiser night or Burning Man – both things I tend to shy away from. I’ll state it: this light just felt like a toy. A fun toy, but not something Serious, for us Serious riders, doing Serious riding. My life was on the line!

The light had one thing going for it, and it was the feature that arrested my inclination of putting the light back where I found it at the shop: it was rechargeable via a micro USB port! This is important to me, as the coin-sized batteries usually used in small bike lights are usually fairly expensive when compared to the price of the light itself. I would avoid any bike light that doesn’t have a way to use rechargeable batteries.

My next worry was how it mounted onto the wheel. Slide the fins of the light between two spokes, and have it rest in the center on a third. There’s a slight dimple within the light’s body to keep this snug. This seemed… fine for usage around town, but I’m not always found around town. Sometimes, I’m flying down a steep hill at 50mph. I don’t want my light flying off – just sounded like a great way to lose a light.

Only one way to test this it seems, and that is to mount the light, then fly down a hill at 50mph. In all my, uh: tests, the light stayed on. So my initial fears were unsubstantiated. YMMV of course, and when not in use, I take the light off my own wheel, but I’m not concerned of losing the light simply from inertia while riding, no matter the speed.

My last bit of skepticism is for the light itself: would it be bright enough to make a difference? Surprisingly: yes! The light’s design has a lot of things going for it. Being mounted on the spokes, it shows on both sides of your bike at the same time. Being in constant motion means that at speed, the light isn’t a point, but rather a band around the wheel. The hue of the light itself changing every couple of seconds and this works into this scheme as well – it’s all very eye-catching. Consider if you were a driver, washed in a dark world of white, yellow, and amber lights: I bet you would think just a little more about what exactly could this rainbow thing traveling round the road be?

And although the light isn’t as bright as my 2-18650 lithium-powered 1400 lumen front light, it’s not altogether dim. In fact, this compact light puts out enough power to illuminate the road below it. It it wasn’t for the wheel and tire itself, the light would be visible in almost every direction.

What I thought of as a fun, party-type of flavor really does work to cause delightful discord from your immediate surroundings. Like the hiker way up on Old Fall River Road in Rocky Mountain National Park, it’s quite memorable, even.

And that’s what truly sold me on the light – and usually any bike light: I was told I was being seen without having to asks someone myself. Think of how good it feels to be called handsome or beautiful by someone you respect, rather than fishing for compliments. In my experience, drivers complain how hard it is to see me, not the other way around. That guy almost made my day. Almost. The ride itself was too joyous, but it was made all the more so by feeling just a little more safer out there.