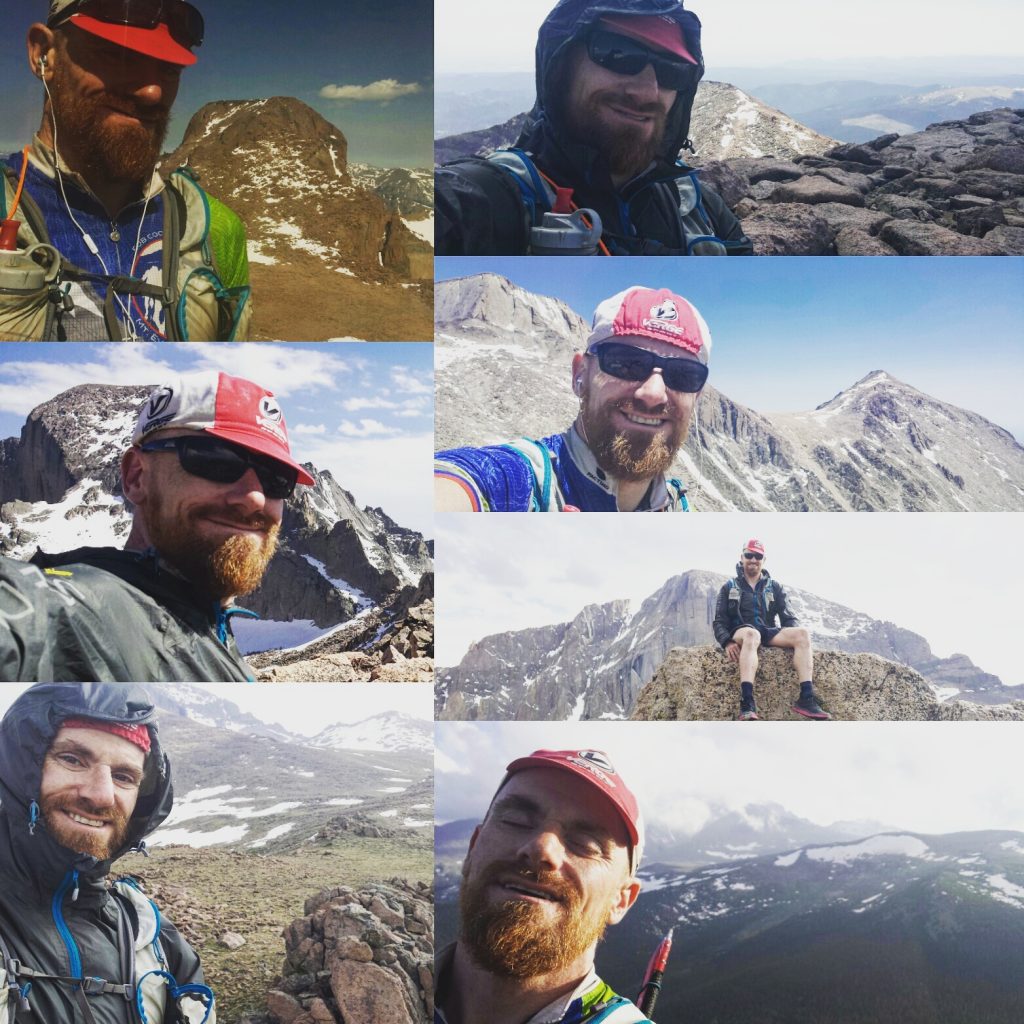 What a difference a few weeks makes. Last month, we seemed to have just flown through the window for a Winter conditions ascent of the Notch Couloir. Since then, the temps started rising precipitously. When I rode back to Longs Peak last weekend, most of the snow had already melted. Incredible.

On this day, I was considering going for a Longs Peak Radical Slam, which is a challenge outlined in Roach’s 14ers book: tag Meeker, Longs, Pagoda, Storm Peak., Mt. Lady Washington, Battle Mountain, and Estes Cone in one go. I’ve done it once before, but didn’t ride up and back in the same trip. So that’s what the challenge for today was. The meat of it all was the 20 miles – mostly off trail to tag all these peaks. Riding up always takes a little bit of the spring out of my step, and the ride down usually is an experiment in mental suffering and fatigue. But I got a rep. to keep, ya know.

My day started with a 3:00 am wake up call, and I was on the road by 3:36 am after eating… something. I think I just stuffed my face full of peanut butter and called it good. The bike ride up was pleasant and uneventful, although the sun seemed to rise so early, I had a slight bit of anxiety that I was going to get to the trailhead, “too late” – whatever that means. Seems I PR’d my ride up – a ride I’ve done now on this exact route more than a dozen times. Not sure why that was – maybe a great tail wind or something  –

Or maybe it was those tri bars I have rigged up onto my 45 degree swept back Jones H Bars. The Dork Factor, in other words.

Wasted no time at the trailhead and simply changed from bike bibs into my running shorts in back of the Rangers Station. Did my best to remember the shortcuts up, before finally getting quite lost high up in the willows near the East Longs/Jim’s Grove Junction. D’oh!

The Loft Couloir was in fine shape – and mostly dry and really proved no problems in microspikes and an axe. I soon was on the exit ledges, and from there, I went straight up to the summit of Meeker, scrambling up the scruffy slabs and ledges. Even though the growth of lichen makes it slightly less appealing, there’s plenty of cracks to make the scrambling sound. Topping out on the summit block, I snapped a quick pic, then it was towards Longs, via Clark’s Arrow.

I know now exactly where the right gulley to descend down is, and away I went! Around to the west side of Longs, and straight up Homestretch. Took a breather on the summit of Longs (and another photo, of course), before retracing my route down Homestretch, and down some more towards Pagoda.

Although this route isn’t too technical, getting to/from Pagoda is probably the crux. Finding the right sneak through the cliffs isn’t supremely difficult. Some hints: when descending towards Pagoda, aim for the notch that’s created by the last ridgeline up to the summit of Pagoda, and the slight rise from its lowpoint – it makes an, “L” shape, like you make with you left hand with your index and thumb pointed at a right angle. You’ll run right into the sneak.

The correct gully will greet you with a cairn on top. The gully is quite beautiful, and spirals clockwise when see from the top. I stay to the left of the gully, and scramble down through its step-like ledges. Some of these ledges are higher than others, so you may find it easier to downclimb them, or simply jump! Once you get down to a section where the grassy ledges stop, and more looser terrain begins, traverse right (north), rather than continually going down, and you’ll pick up the scent of another series of cairns that will take you on a horizontal ledge system to the northern edge of the Keyboard of the Winds, where you’ll finally escape the ledges themselves. If you keep going downyou’ll most likely get cliffed out. Once out of the gulley, you just have a quick boulder hop up to summit Pagoda.

Descending Pagoda, the next goal is to actually get to the Keyhole. I retraced my steps, and took the gulley down right before this same cliffband I talked about above (no need to go back through the sneak). The scrambling here is somewhat slabby, with cracks to help you – and/or some loose terrain (but I’d rather stick to the slabs). You’ll cross over two small couloirs that you’ll swear are the Trough, until you get to the actual Trough, which is much larger. From there, you pick up the Keyhole route (and its bulls eyes), and onward! to the Keyhole.

From the Keyhole, I made a rising traverse to Storm Peak, where I slowly started to… fall asleep, even while scrambling up! I made it finally to the true summit, and passed out for a good 45 minutes. Old Man Justin, it seems. After waking up and feeling much refreshed, I glissaded down to the camp sites of the Boulderfield, picked up some water, and started my ascent to Mt. Lady Washington, just over on the other side. Felt wonderful, and descended towards Granite Pass for the weirdest of the highpoints: Battle Mountain, which sees little in prominence, but it’s part of the route, so whatever.

Onward east I went, cross country and surprisingly found a great line through the willows, then the bristlecones, to get to the lodegepole canopy, to attempt to hit Storm Passas close as I could (hint, traverse north more than you would think!). Got about 500 feet from dead center, which I thought was pretty alright!

Finally on a trail again, I powerhiked up to the top of Estes Cone, and with a sigh of relief, jogged back down to the pass, then back to the trailhead, which was mostly downhill, on trail, at a mellow grade. Ah!

Long day on the mountain! I started up from the trailhead at around 7:00am, and it was quickly approaching 8:30pm. I still had to ride back home! I again transitioned in back of the Ranger Station, and hopped on the bike, blinky-lights-a-blazin’. Another wonderful descent back on a route I’ve done so many times now, I could do it in my sleep. Nothing much to note, except the strange thought about how realistic this day would have been if I started with losing 5,000 feet of elevation gain getting to the trailhad, and would have to climb up 5,000 feet to get home. Yikes! Thankfully, that’s not the case.

Made it home at 10:15pm, enough time to shower and change and get to work the next day relatively well-rested. The Longs Peak Radical Slam Duathlon had been born!