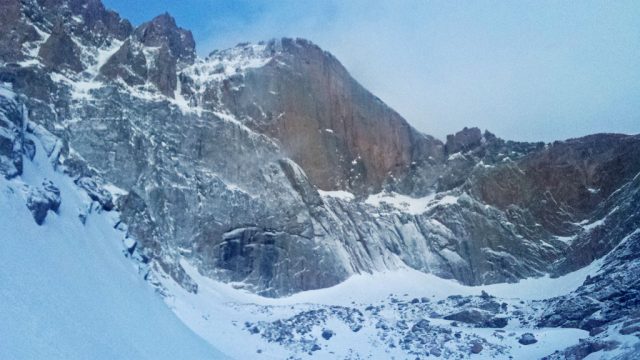 I’ve long since seen, “mountaineering” as the ideal stage in which to set my practice of suffering in the outdoors. Although I’ve certainly danced around mountaineering, I’ve done so only on its periphery. I borrow its terminology with jealousy as the basis on how I explain the other disciplines I practice. For example, Alpine Style: going light and fast. That’s exactly how I explain bike races I do, that take weeks to finish. I also describe no-holds, lightning-quick bike rides as, “Disaster Style”, which itself is coined by alpinist, Kelly Cordes.

But, mountain biking is not mountaineering. Nor is trail running really, nor even rock climbing in the classic sense. They all take a small aspect of mountaineering and focus on this one thing, disregarding the rest. Which is a perfectly fine thing to do.  But mountaineering – I want to imagine at least, comprises a large set of skills to be competent in, to allow you to reach your objective and come back down alive.

So when Peter Bakwin and Kendrick Callaway invited me to climb the Notch Couloir with them – truly a classic mountaineering route on Longs Peak, I was excited to take it on, as well as relatively scared out of my little head. As much as others may want to believe, I’m not the boldest of climbers.

For the fourth time I’ve taken a ride in a motor vehicle this year (#1 bus ride to Denver and back to give back testing shoes (bike was broke),, #2 trip to Eldorado Springs to climb, #3 different trip to Longs Peak w/Peter and Kendrick), we all left for Longs Peak at some ridiculous hour – around 2:30am? Devastatingly early for a trio that likes to run up and down things such as 14ers. But the mountain was currently in Winter conditions – surprisingly, as it was almost June. Winter conditions meant a slow approach, which along with a late start at this time of the year would mean horrible snow conditions – even high up. We still had to move quickly.

We reached the base of Lambs Slide a few minutes after the sun peeked out from behind Twin Sisters to our east in dramatic fashion. It had snowed very recently, which gave me worry, as the snow could be unconsolidated and dangerous. We decided to go up the 800′ Lambs Slide couloir anyways to check out the conditions of the Broadway traverse, which we would need to take to make it to the base of the Notch Couloir itself. Our team had tried reaching the Notch Couloir just the week before, but found worrying conditions on Broadway, and we bailed.

This morning, conditions seemed OK enough, so we racked up, and I set out to lead a one very long simul-climb, with Peter and Kendrick following me. How I got literally roped up into this situation is somewhat a funny side story: both Peter and Kendrick believed I had the knowledge and experience with placing protection, as well as climbing steep snow . So, who better to lead all the fun parts of the Notch Couloir route for them than I?

I must be an incredible bullshit artist.

To wit: I currently own about four cams, and four pieces of passive pro, and have lead maybe a 5.8+ single pitch offwidth at Turkey Rocks – badly, as my crowning achievement in the world of trad climbing. If you asked me to knit you a hat, I’d probably have just the same amount of knowledge about the concept of knitting the hat, as I did with trad climbing competently, rather than possessing the skill to pull off something you can where on top of your head/lead you to the top of the mountain.

What I may have more understanding of – more than Peter and Kendrick at least, is building anchors and belaying a follower. Two things you can get pretty good at, even if you’re climbing easy stuff. My climbing partner was my ex-girlfriend, and well – it was someone I wanted to keep safe more than anyone, so I’d make sure my anchors were pretty alright. She taught me everything I know, and I’d list her as “extremely competent” when it comes to trad. climbing. Somehow, she was able to teach me a few things, without losing too much faith in my thick head.

Loaded down with gear, an ice tool in my hand, and a faint idea on where to go, I set off in unfamiliar territory. Even though I’ve crossed Broadway to get to the start of Kieners many times, it has all been in summer conditions, and Broadway looks completely different when absolutely buried in snow, as it was today. The snow, first layer being somewhat powdery  was also very deep. Tiring to move in, as you would need to kick under it all, to find sure footing.

Focusing on the task immediately at hand, I moved forward in a simple rhythm of kicking steps in, placing my tool, and looking for opportunities to plug in pro – which I could every 50 feet or so. I wasn’t planning on falling, but the contingency plan if I did was a bit grim for a motley crew such as us. I brought along enough gear to put together a prusik system to haul myself up, but in actuality, if I fell, my partners would also get uprooted, and there we would have three people hanging below the 700 foot lower east face squirming to get up. And that’s if the gear I placed held us.

I didn’t have bandwidth to think about all this while on the mountain though, I just did my best to do the job and get to the start of the Notch Couloir. There were actually some pretty outrageous positions found en route. Traversing around the rock bulge made me laugh mightily. In summer conditions, it requires you to hug the wall, and find a hold for your right hand, before you shuffle your feet to the other side. You wouldn’t want to mess this up, as the exposure is incredible. Today, the entire block was buried in snow, and the, hug-then-reach-around song and dance wasn’t going to happen. Instead of hugging, I just walked right across the very temporary snow bridge that had built up besides the block, knowing full well there wasn’t anything but wishes keeping the snow under my feet together.

At another spot on the traverse, I was required to cross a pretty substantial and very steep snowfield, with no rock to put protection in. I nervously started to crossing it – obviously not wanting to lose my footing. It seemed a bit impossible until – of course! I remembered I had the snow picket!: A piece of angle-iron-shaped PVC plastic with a ‘biner on the end. More psychological protection than anything, but I sunk that sucker in deep and carried on. I only got a few footsteps, when there was yelling from my partners to hold up a bit. They were unaware, but they had me stopped in the very middle of this steep snowfield, wherein I was bombarded by small spindrift avalanches and other debris coming from above. I tucked in as best I could and just maintained until the rope came slack enough again to move forward.

After one more perilous (to me) snow traverse right across the Notch Couloir, I finally made a bombproof anchor, ten feet above the start of Kieners – such was the level of the snow. The Notch Couloir ends at a absolutely vertical part of the Lower East Face – the exposure was exciting to say the least. My partners greeted me, and we attempted to sort out the gear, and I was off again for a very long, very slow, and very run out simul-climb – this time ascending the entire Notch Couloir. Spicy considering falling down meant falling off the bottom of the couloir itself, which seemed worse than swinging on the Broadway traverse, but I’m not sure exactly by how much.

Again, I put in pro every 50 feet or so, until it slowly ran out, and I had to became creative. Rope drag became atrocious as I quickly ran out of long slings, but I could see the top of the bottom of the Notch after a long while, and with one more picket placement, I traversed over from the left side of the couloir to the right, and hip belayed from an enormous ledge.

The plan at this point was to do the Stepladder pitch, or pitches? We weren’t exactly sure. I was spent from the super long leads and offered the next lead to someone else, but got no real takers. It didn’t matter – the weather turned to all-hell, and none of us could tell where exactly to go. We opted, with a bit of reluctance, to go from the east side to the west side of Longs, and finish up the climb from there. Luckily for us, the top of the bottom of the Notch is a pretty convenient place to make this happen. With a quick squirm through a tunnel right below the low point of the Notch, we were on the west side. The work to get to the summit from here was at least an hour more of climbing and traversing on steep snow. We all lowered our heads and got to work, as conditions continued to deteriorate. Finally though, we got to the summit, with little fanfare. We snapped some photos and immediately started our descent down to the Cables route, not standing on the summit for more than 5 minutes or so.

The North Face of Longs was also choked with snow of course. I didn’t share my worry, but I didn’t know how easy it was going to be, to find the eyebolt to rap off of. Thankfully, Peter knows the location better than most anyone that’s not a climbing ranger for RMNP – this was, I think, his 67th lifetime summit of Longs Peak. We found very steep snow to descend to the eyebolt, and getting everyone down from there seemed to take nightmarish amount of time. Avalanches can and do happen in this very spot, in this very time frame we were in, and none of us, including me, were really following protocol on how to make sure everyone is safe and on indirect next to an anchor. Of all the time we spent on the mountain this day, I felt the most unsafe here. Accidents happen the most on descent.

But, we all made it down safely. It’s a wonder how different things become from the top of Cables, to its base. We now just had to deal with the long slog back to the trail head – no more technical climbing awaited us. I was a pretty broken man at this point, and Peter/Kendrick were able to go just a little bit faster than me downwards. I lost sight of them, then forgot to take the Winter shortcuts, making me lag even farther down. I began running in my enormous mountaineering boots, somewhat out of my mind with fatigue, but knowing full well that the trail ends, and ends soon.

I joined back up with Peter and Kendrick at Peter’s car. Both men were splayed out in back of the car, just laying down in the parking lot. I joined them, and instantly cramped up. The Notch Couloir had one more adversity for me to overcome.

We drove back to my place, and I said my goodbyes. I had enough energy to stuff 4 hard boiled eggs in my mouth, and find my bed, where I instantly fell asleep.