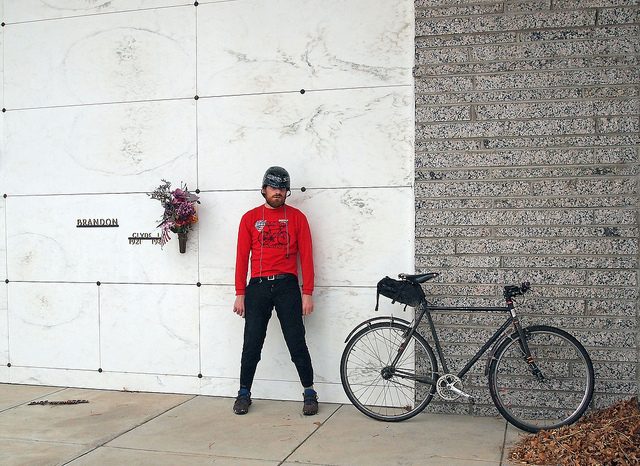 Yesterday, I was researching untested terrain to ride my bike up to. I was looking for mountain roads I have yet to try out, which is slim pickin’s in the winter time, as road conditions are going to suck anywhere with surprise! ice on the roads and inclement  weather means a snowstorm, not just a little rain shower. Local hills are fine for “training”, but I just wasn’t looking forward to doing hill repeats on Lookout Mountain Road. The weather promised (and delivered) to be exceptional, so I got my lazy bones out of bed at a decent time and headed up Deer Creek Road on the fixed gear to see what I could find.

In my sights, next to, “Tiny Town”, was what I collected was some sort of cemetery on top of a mountain. Off the main road, seems that the track turns to dirt. A large gate seems to block the entrance and I didn’t know if the place was open for the public, but I was down, so I investigated.

Weather was really perfect for the middle of January and quite a few people were out on sadly neglected bikes and fancy new kits received on Christmas. My getup these days is decidedly less fancy – just an old gym top and SWRV knickers that have every single stitch failing – including the crotch zipper which is broken (well, ALL the zippers are broken), held together only with a extra large safety pin. My old school, “mountain bike” shoes are on their last… leg. Too bad, they’ve been a treat for the past few months. I kind of like looking completely not put together, riding a bike that doesn’t coast up gentle mountain roads. Sort of fits my style.

Hadn’t ridden up Deer Creek in a while and even less lately on a fixed machine, but it was pleasant, with only a few areas that go over 5%. To my delight, the gate at the start of the mountain climb was open and promised to be so until 4:00pm, so I rode up. I nice switchbacked road, reminiscent of mountain pass roads in Europe, where the track is narrow, steep and fun. 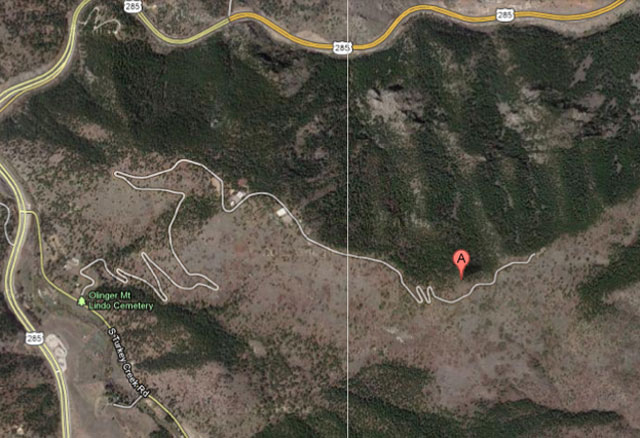 I doubt it gets much traffic from sporty bike riders, as the dirt trail will turn off most roadies, I’d reckon.

Topping out was a little strange, as the actual cemetary area was spread out in different plots and designs. A mausoleum area, and several fairly standard plots here and there and then just – strangeness. There were plots just spread out – basically, wherever the family wanted the gravestone to be – it was. You could literally trip over the stones while strolling about.

After the ride down, I hightailed it to Red Rocks and then up HW 40 to Lookout Mountain Road and down. Got stuck behind a car, which was somewhat expected. You can, with ease, go much faster than a car going down this road, as the speed limit is only 20 mph and cyclists will seldom follow this (I don’t follow this), but cars seem to be a little more thoughtful. It’s also due to more maneuverability that a rider on a “performance” bike can get out of his machine, when compared to a much wider car on these twisty roads.

A few cyclists caught up to me, dressed fairly “pro”.  They were, no doubt quite adept at riding their machines and their thighs told a story of much training. Within seconds of catching the car and me, they passed the car as, sure enough, another car was coming up. They all avoided the oncoming car without incident, but their aggressive style failed them on the very last switchback. As I passed them, still stuck behind my pacing car, you could see that at least one of them had crashed, hard and wasn’t exactly walking correctly. His very fancy bike was in a few pieces and there were other cyclists keeping things from getting run over.

I’m not one to really advocate safety – I’m going down the same hill, with my feet on the nubby downtube shifter bosses, as my cranks whirl wildly below me – a highly contentious position give the high center of gravity and lack of fault-proof points of contact with the bike: a slip of my foot will send it down and straight into the spokes of my front wheel and – well, you could imagine what would happen, next.

But, without some sort of communication with that car blocking the way, there’s not many instances where I’d just blow ahead of it. Many times, a car will move waaaaay to the right, or wave you over and then I feel good about things, but a car driving down something like this road, in the middle of a saturday could be someone out for a weekend ride and isn’t quite as intimate with each meter of pavement and could perhaps do something rash when the unexpected cyclist gets in their way (like swerve into them). Plus it’s fucking rude.

I guess maybe the lesson is to know thyself and thy machine and perhaps think that maybe conditions on the road aren’t the best in the middle of January. That’s really all.