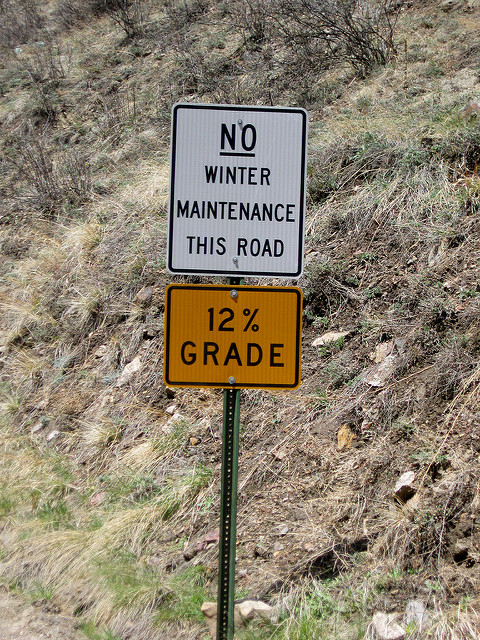 Having covered our plains with highways, factories and cities, having subdivided our hillsides into suburbs, having deepened and dammed up the rerouted our rivers to make seaways or sources of electric power, we have left only the ocean and the mountains to remind us of what we cannot do to the landscape.

The ride plan was to ride back to Idaho Springs and find Oh My God road, which I missed out on, my last time coming up this way, opting to instead take the paved Central City Parkway to Central City. Oh My God promised perfect training terrain: high grade, dirt road. Fully loading up my dirt lady, I left my front door towards Golden and the normal route up to Idaho Springs, via I-70/HW-40/etc around 8:00am.

Once in Idaho Springs, I settled down to my lazy ways, taking time to visit the women at the sandwich shop to buy lunch, the bike shop to figure out my back wheel and the coffee shop to get something to make it through a long ride. I must be getting more approachable in my old days; conversations seem to start a lot easier with folks at mountain towns. It may just be the bags on the bike that invoke curiosity around the strange pseudo-traveler.

The bike shop wrench on hand turned out to be a part time guide for the Adventure Cycling Association – the same non-profit that mapped out the route used by the Tour Divide. Fun to chew the fat with him as I was trying to patch/slime my rear tire and he was trying to ring up (quite unsuccessfully) my credit card. I ended up paying with dollar coins the change machine at the Boulder bus station gives you back. I had $15 worth of dollar coins after last taking the bus and was more than happy for him to take six of them. Talking a bit about the race, he showed genuine excitement and a little bit of jealous. “You fucker!” I think is how he actually summed it up. He’s hoping to ride it in a few years as a tour guide, too. What a fun job that would be. “Well, I worked for the phone company for 37 years.”, his response.  A righteous reward.

My last $1.50 in change went to the coffee shop, as I got a single espresso, which turned into a double (dirt bag trick if you must know: espresso machines usually make two shots at once, so if it’s slow, the barista will usually give you both, if there’s no one else waiting – remember to tip). Asking for a map and directions to Oh My God, the barista persuaded me outside, “Got a minute?” leading me out back of the shop, through the coffee roasting area. “See the canyon over there? That’s where you wanna go. You’ll see a hand painted sign on a piece of found wood. That’s it“. Also asking for a road atlas that she was also happy to provide, I sat down to drink my coffee and eat my sandwhich and figure out where the hell else I’m going.

Oh My God leads to Central City, a very unfriendly-to-cyclist town, as cycling is actually outlawed in nearby Blackhawk and unless you want to backtrack, one cannot go through the state highway system to do anything else,

but, I thought I could try taking some of the dirt roads just above Central City and do some exploring. There seemed to be one that – bang! almost a straight shot to Rollinsville, a good  15 – 20 miles away as the crow flies. From Rollinsville, it’s a short downhill to Nederland, where I had also penciled in a todo, to see if there was a way to go from the damheel in town, to Walker Ranch park, which we just hiked the 8 mile loop of, last Thursday. Trying to find an all-dirt route from Nederland to Boulder and a route from Nederland to Walker Ranch could provide a good portion of it. From there, it may be possible to pick up a trail in the Boulder Mountain Park and get all the way to Baseline. Who knows?

Noticing the atlas was about the same vintage as my own self (well, not really – maybe in Road Atlas yearss), I questioned it’s current accuracy but! details. A road called, “Apex” seemed to shoot straight north, after getting out of Central City. At one point, the solid line just sort of dash-dash-dashes out. Not sure what that was all about, but there seemed to be alternatives through another system of roads… that… also… dash-dash-dash out. Forgot to look at the key to the atlas. Gah, more details, time to go.

Oh My God turned into a very well-maintained dirt road and led right to Central City. A nice steep grade with no one on it, except for me, except when I had to relieve myself. Some mining trash to entice the tourist. Seemed a much faster route to take than the Parkways to be honest. 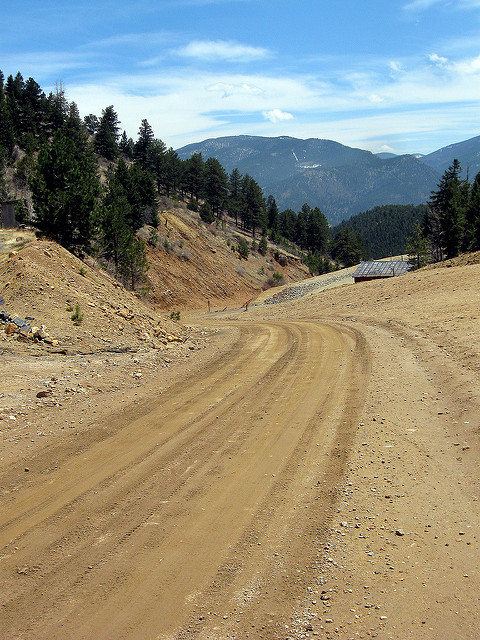 In Central City, I simply found the main drag north west a started walking up. Asked a few locals if this was the way to Apex. One didn’t know, another, an older women visiting the Central City graveyard (multiple, large areas – mining is somewhat dangerous) thought it just might be. There weren’t too many routes to choose from. Took it anyways.

To my delight, the road stayed dirt and just kept climbing. Snow started skirting the edges of the road and drifts became deep in the surrounding trees. The climb just kept going, until I reached the area that on the map at the coffee shop must have been where the solid line turns to dash-dash-dash,

The road turns into an unimproved old track of discernible vintage and oppourtunity, as it was completely underneath snowdrifts, with a sign poking out prohibiting motorized vehicles. Will have to check it out another time when the snow is gone. Perhaps August. 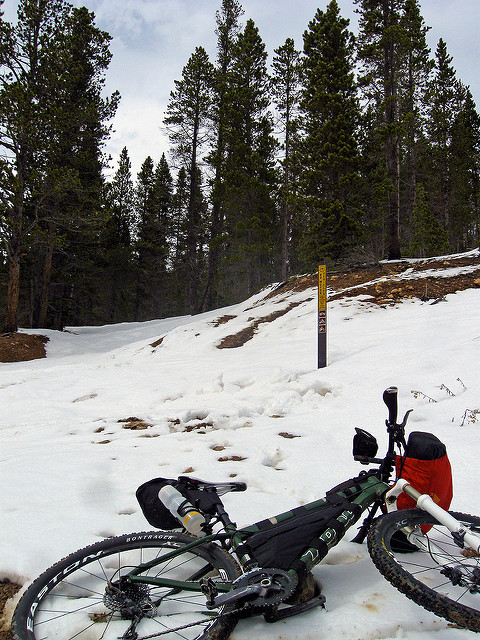 A main road seemed to continue after veering to the right in the first of what turned out to be many switchbacks. More elevation gained. This affords good views. An unknown massif (to me) presented itself, dominating the western horizon, 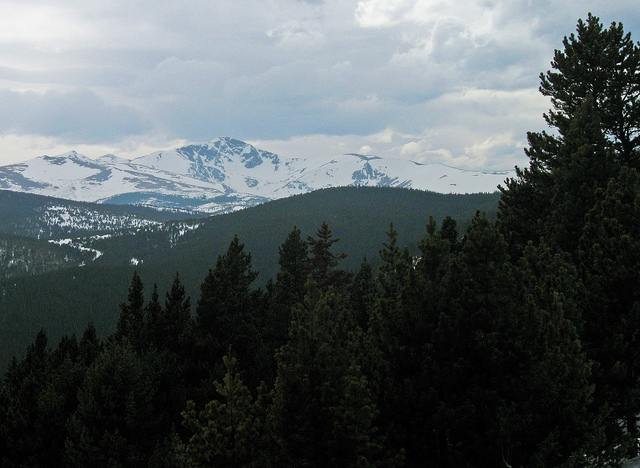 Later in researching it, I found it to be James Peak. To the south Grays/Torreys could even be seen, and Mt Evans looking strange seen from the North, with Grey Wolf and Mt. Spalding (I believe). What I was on, I had no idea. Keeping on the road, waiting for an intersection to take to get to Rollinsville (still having hope!) 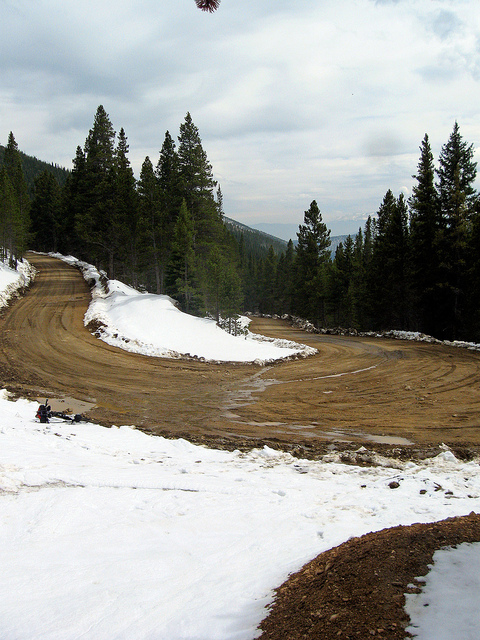 The road kept going up switchbacks. If I started this route on Oh My God, this road must be, Judas, Why Have Your Forsaken Me? road. Grade turned steep, the terrain, rocky and myself: spent. Time to push. Push all the way to… a transmitter station? And the end of the road. A summit.  A dead end.  Another conquest of the useless. Researching later, I found I had stumbled up Dakota Hill, at 10,925 ft. 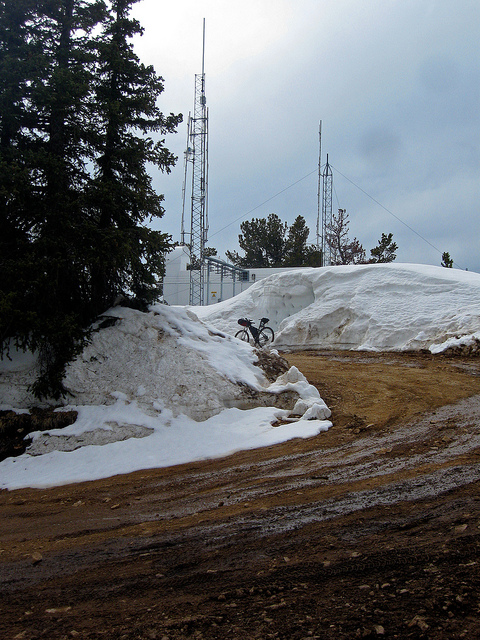 Getting up meant going down the rocky, steep road,  awash in rivulets from melting snowpack. A total bonus. I took a fork south east that appeared very early in my start up Apex Road that I knew would find me at HW 119, hopefully near the Golden State Canyon turnoff, which itself is at the top of the pass and which would make a nice easy descent into Rollinsville and then Nederland, via a paved road.

No such luck. Instead it took me to almost the bottom of the hill, almost back to Central City. Bollocks. Starting to get late, I had little options that looked attractive. Going back up HW119, to Golden Gate Canyon, down into Golden would take over 3 hours, when all said and done, I’d be in Golden after dark. Going back up Oh My God and back to Golden, even longer. There was really only one other route out of Central City: take HW 119 the other way (east) – through Blackhawk and back into Golden. Don’t know the road or the terrain. Could be all downhill, could be hilly, long and hard. Eh, whatever, high time I got myself into trouble today.

Passing through Blackhawk, breaking their little no-bike law yet again. Passed the police SUV just inside the town line. Didn’t do a thing. The HW turned out to be a nice gentle grade down. Seemed to be a perfect route to lose around 3,000 feet of elevation.

Which it was, until the Highway abruptly stopped at a junction with HW6 and HW6 doesn’t allow bikes, as it’s a windy road, with little shoulder through a busy corridor to Blackhawk. Probably more unseen problems. Didn’t really think this one out, Justin. Decided to just go for it, what the hell. Shouldn’t take too long to get back to Golden and off this HW. The sign to Golden says… 15 more miles. The “no bikes” sign was also fairly obvious.

Made careful but good time. Passed another police car. Again, no reaction. A beautiful route Rocky cliffs surround you the entire way. Became a little more comfortable, until the tunnels started showing themselves. About four of them.  Dark and narrow. My strategy became: wait for all cars to pass and none within eyeshot behind me and book through the entire tunnel. The, “no bikes” sign right before the tunnel helped improve my speed considerably. Golden never seemed to be appear. Just another mountain to pass around. And then another. Until, yes, I was out. Relief.

Terribly hungry from the exertion and having burned through the sandwhich of 5 hours ago, I again booked it to the all-you-can-eat $10 pizza/salad bar to indulge myself and carry a few calories for the rest of the week. Nothing is as disgusting as watching out of shape people attack a salad bar. I’m trying to be nice, but hell is other people, as Sartre would say. I’m at a buffet. I’m eating at the buffet. I don’t understand my own sensitivity to all this. Pizza going in my  mouth, too, but it’s a killer for my appetite, seeing piles of cold pepperoni being stacked on a thin bed of lettuce and then drowned in ranch dressing.

Road home after stuffing myself. Back at the doorstep around 20:30,  ~115 miles more put on the bike, now fully loaded and many miles on dirt, with a sizable gain in elevation. 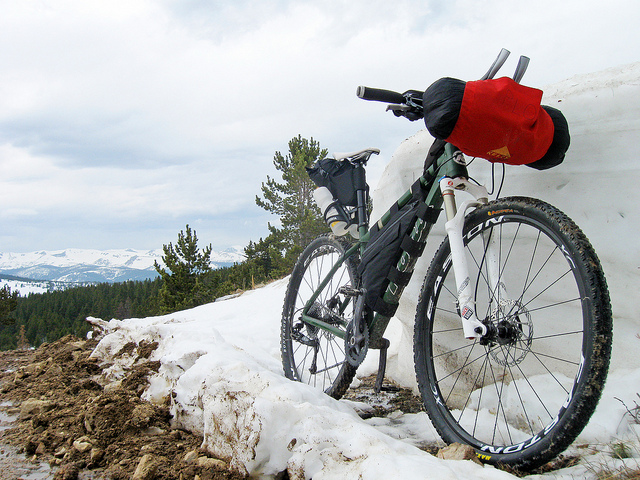