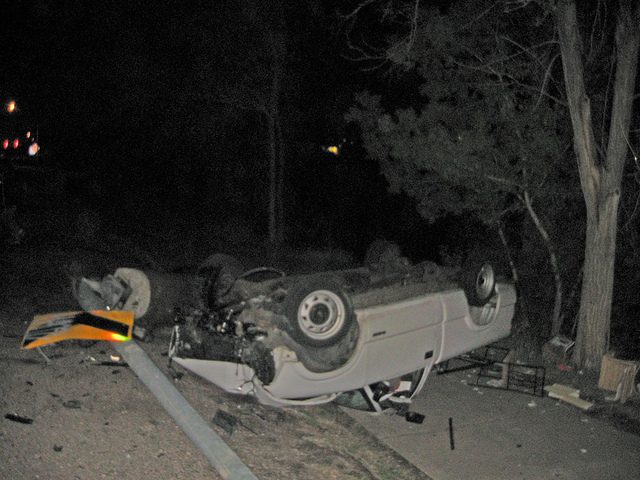 A short tale of overdoing it.

I decided earlier last week that I should join the Colorado Randonneurs on their 300km on Saturday. “Haw haw”, I thought, “I could polish off a 300km ride no sweat”

In fact, my plan was to ride the 20 miles to the start of the ride, ride the ride and then ride 20 miles home – around 220 miles all said and done. On the mountain bike. With all my racing gear.

I leave the sleeping system home, but take everything else and blaze towards the start. Adrenaline is flowing and I feel nothing but wanting to get there in time. Not even the chill of the night’s air. Amazingly, I’m reaching 22mph on the bike path.

My head torch shows the way, albeit barely. There’s someone stumbling along the path. I call out I’m going to pass them and instinctively take actions for the non-action they’re about to take. An easy obstacle to overcome. And then something really large gets in my way.

I can’t tell what it is, but it looks like a barrier of some sort, or a service vehicle is on the bike path – as if they’re doing work on the road or the path. Slowing the hell down, a try to make sense of this large white thing in front of me. I feel that maybe my exhausted mind is playing tricks on me. But no, it’s just a truck.

But, it’s a truck, overturned. There’s been an accident, very very recently. The truck is smoking. The metal pole it had hit is right besides it. Stunned, I ready myself to look in the cab and see either a dead or dying body. 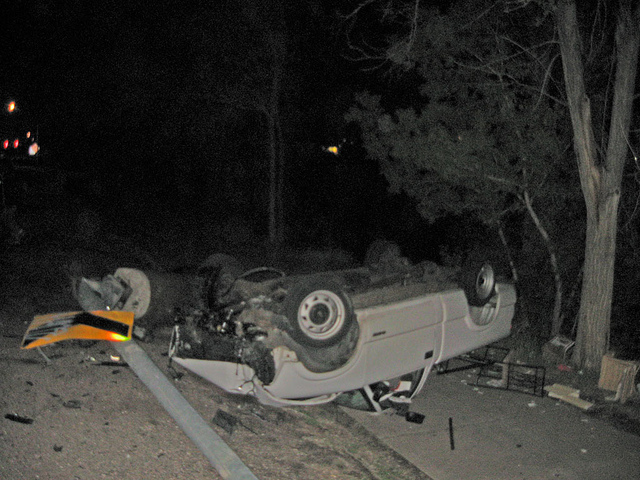 No one inside. But right outside is something moving. Crawling. I watch in disbelief as the driving crawls out the vehicle to the side of the path. I call 911 and report what’s happening. The man continues to crawl, then sit up, then try to walk away, all the while himself calling someone to get him out of there.

I tell this to the dispatching, in complete disbelief. This man has just literally walked away from a flipped over truck and now is trying to leave the scene. I can’t tell if he’s from another planet, completely and utterly, over any acceptable leave drunk off his ass, or just dazed from what just happened. Or all three. I suspect, if he isn’t from planet Krypton, he’ll pass out and wake up in incredible pain, once… whatever it is that is keep him conscious abates from his system.

The police come in minutes and pick up the guy, who almost collapses. I write a report. Shocked at what I just saw, I continue down the path towards the start. “Well,” I thought, “at least now I’ll have a good excuse for being a little late!”. Just laugh it off, I thought.

I get to what I believe to be the start of the ride: E-470 and Mineral. But I’m not thinking straight. I looked a map before leaving, but didn’t, you know really look at it. That tired. Exhausted already. E-470 and Mineral are literally 100 yards away from each other, parallel and I’m between them, wondering where the park and ride would be. Then I realize that I’m completely lost.

From the south of Denver, E-470 runs East to West but also abruptly turns North when it reaches the foothills. I can’t belive this, but I wonder to myself, with mere minutes left before the beginning of the ride, that maybe the start isn’t anywhere near where I am, but 10 miles away, when E-470 and Mineral actually intersect each other.

and defeated, but what the hell, I’m out here, might as well just do any old ride I want to, so I plan to go into the mountains and do this and that and not stop until the sun (which hasn’t yet risen) threatens to bow down 16 hours later. Fuck the world! I’ll save some money, I thought, since I won’t have to sign up for the ride, either.

I get food and caffeine from the gas station. I pause and eat.

I start to finally realize that I and my bike are in absolutely no shape to do any riding today. I realize that I am about to fall asleep standing up and that I am cold. Very cold. A few early waking people are around me don’t look cold. I wonder if my body temp. is just low for some reason. I realize that I forgot to change the tires on my bike – my back wheel has a tear in the sidewall that’s being held together with a big rubber patch from the hardware store and a wish. If it blows, I’m stranded. I realize I had no idea what I’m doing.

I might not even be able to get home.

I ride home, at a distinctly slower pace than riding all the way to nowhere. I just can’t concentrate on powering the bike. Barely holding it together, I make it back to my house, 20 miles away, safely. I take a shower, I go to sleep and I don’t wake for almost six more hours.

Sometimes long rides can be made to look easy, sometimes you just have to admit you are just a weak individual, with limitations and can’t do everything you want.