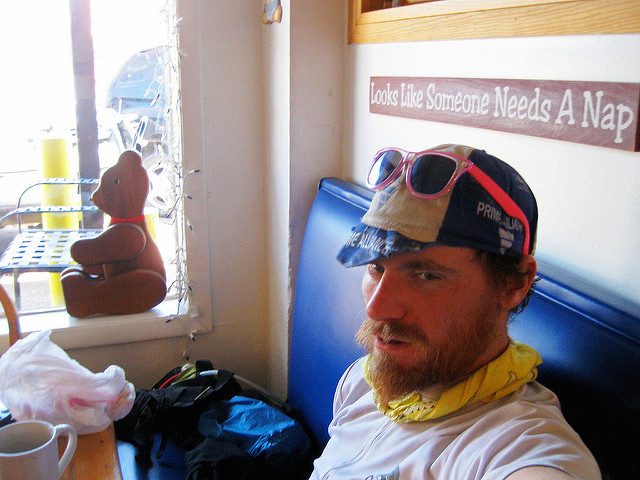 At around 1:00 am the previous night, I settled on the idea to try the, “Ring the Peak” route around Pike’s Peak. You can learn about the route here and here. I just thought, “Yeah, whatever” and took a few hours snooze and headed out the door from Denver, towards Pikes Peak, via the Rampart Range Road, a nice 50 mile track of fairly well maintained dirt road, with a nice elevation gain (up to 9,400 feet or so) and relatively little traffic. Time to try out some gear and get another over-nighter in.

My initial idea was to actually ride to the Pikes Peak Barr Trailhead, climb six miles of the Barr Trail to the Barr Cabin, stay overnight in a campsite near the cabin, push for the summit, still six miles away in the wee hours, however I could (hike, bike, hike and bike) and ride bike back to Denver, that same day. Essentially compressing a trip I did last year from three days, into two. A lofty goal, to say the least.

The snowfall on the mountain warranted a reconsideration and the amount of gear I wanted to pack left out anything except the bare necessities of riding bikes, so not even hiking shoes were green lighted. The previous trip at least included hiking shoes, poles, snowshoes, a hiking day pack, stove – and all these things seemed essential.

The current in development of the RD rig looks a little like this:

Coming from a world of touring bikes with racks and panniers, handlebar bags and all that cal, this rig is essentially stock, except for the compression bag tied to the handlebars and the small Ergon backpack. Some notes:

The compression bag carries my entire sleep system and the backpack carries everything else – enough, at least to camp at altitude below freezing. It’s attached to the handlebars by part of a nylon backpack I hacked up and sewed to work as a sling to wrong around the bag and attach the the handlebars. Used a bungee chord to make sure everything wasn’t going to explode spontaneously, but that wasn’t really needed. As good as it worked, I’ll use this as just a prototype and take time in sewing something a little more together as a few rough spots did appear in the idea.

The Ergon backpack worked well, having just enough space to carry everything, except my food inside. A little peeved that the zipper broke half way into the trip on such a fancy piece of kit. Had to be emergency fixed with bungee chords and using the provided rain fly so that the contents didn’t explode everywhere. The zipper itself was a waterproof variety, which makes one wonder why they used a flimsier waterproof zipper and provide a rain fly – is the backpack waterproof, or not? Will try my hand at repairing the zipper. Being proficient with a needle and thread is essential ultralight skills, but I don’t know how many people are packing such things on the TD. I will surely be.

Attached on the bike, on the seatpost is a dual water bottle holder. This is the third one that I’ve used – the others, same designed have broken. There’s a flaw in the design at the attachment point of the holder: the bolt that tightens holder to the seat post creates a weak point in the holder itself and that’s where it breaks each time. Hydration is really really really a big problem for me, as I seem to go through water  like a fish. Four water bottles are absolutely essential for any ride over 3 hours.

The aerobars are a clip-on variety and seem to work well with my body. I have a strong back from doing some gym time in the winter and a ton of hiking with a ridiculously overloaded pack up 14ers last summer, so the somewhat extreme position it lends me doesn’t hurt my back. The position actually helps me rotate my hips and gives me a really powerful position on the bike I can hold for what seems forever and just plow through road. I can change my position to more of a technical, upright position still, while, for example, navigating some rough patches and bumps or whatever. The saddle is some Specialized hoo-ha. I’d love to plunk on a Brooks saddle, but it just won’t work with that dual-position stuff, unfortunately. I think the key to keeping your ass happy on these long rides is not to sit down all that much. Being very much aware that taking the pressure off as much as possible leads to a happy ass. Again, I’m pretty happy with my upper body strength from gym time, bouldering, hiking and street fighting (kidding) that it’s easy enough to employ those muscles to lend a hand. Not having a backpack on would help keep weight bearing down and I hope to ditch the backpack, as soon as I can.

The bike itself fits me like a well-worn baseball mit. The incredibly radically sloping top tube scared the crap out of me, especially when I compared it to other frames I’ve seen, but the effective top tube height is pretty optimal. If you take a gander at my crotch:

Rampart Range Road was a nice little ride and I made the 90+ miles from my doorstep to Woodland Park terribly faster than I had previously, on my Crosscheck haulin’ a trailer. The road itself meanders enough to make life worth living and gives you glimpses of Pikes Peak as it slowly reveals itself to the traveler. A little concerned by mid day as clouds began forming above and a small storm was raging on the top of Pikes Peak – well, small enough that I could see it from 40 miles away,

But after a few hours, the clouds broke up and it was sunny, again.

Wasn’t looking forward to bivvying in a snowstorm, but whatever comes my way, I guess.

Hunkered down to a pizza, refilled the water bottles, packed the leftovers and headed on towards Chipita to Segment 2 of Ring the Peak, which, happily starts with a steep hike-a-bike. Even the paved road up to the trailhead was steep – steep enough I failed to make it on the lowest gear I had. That’s some embarrassingly shit, right there. Of course, an audience was close by in the front yard of a nearby house.

I was able to finish the initial bid for the ridge line before sunset, but the rest of the route was done in the dark. Slowly. With much snow in the way. Thankfully, the route itself is well-marked,

if I hadn’t the topo maps or trail descriptions, I would have been just fine.

Made extremely awful time until 12:00 am where I gave up any forward activity – around 13 miles in 5 1/2 hours, losing the battle after yet another snow-covered ridge to cross.

Dragging a bike through parts of a trail that are impassible because of snow or too steep for your (or, well, my) tired ass rates as some of the least enjoyable outdoor activities I can imagine.

Sleepiness set in and I crashed in a patch of ground that hadn’t any snow on it. It’s extremely delightful to camp with just a bivvy as setup time is measured in a couple of minutes and no wrangling of a tent. I may never go back to tent-style camping again.

Woke up to attempt the last section I planned to do of the trail, Horsethief but the entry point just showed more snow and ski tracks – that was enough for me to pull the plug. If only I had another day’s insurance to finish it all up.

Stopped at Woodland Park for some more food –

This restaurant was bear-themed and they had dozens of the damn things everywhere. Great coffee though – I’ll certainly try to stop in again. Friendly waitstaff that didn’t seem to bat an eye as I took off my pants to sew up a tear in the seat of my pants while waiting for my order to complete. That’s class on my part.

Love the sign above my head. Lost the bet with the waitress that I could finish the biscuits and gravy (and eggs and sausage) and potatoes dish with the side order of three pancakes. Dammit. Took the rest of the pancakes with me for a snack. Never did got to them.

Road home much the same way I came and felt fresh enough to make the 100ish miles in around 12 hours. Being in race touring weight, with tired legs and with major sections of dirt (and a headwind, and and and -), I thought that a fine time. In fact, I thought maybe it was too fast and one of the things I may work on is keeping a slower pace. Worried, slightly of blowing up in the first few days of the TD, without much to give afterward. I’ll keep an eye out for that. I’m not a particularly powerful rider, nor am I twig-sized, nor will my setup be ultra super-critically light, so my only chance of surviving the, uh, racing part of this race is to take ‘er easy and know the psychological part of being alone in BFE USA isn’t too much of a big deal for me and that I can pass out sleeping most anywhere.

Gotta rely on your strengths.

Sadly, my SPOT II ran out of juice before the first day’s end. I hadn’t noticed it blinking, “red” until the next morning. Blinking “red” is supposed to mean that the battery is at 30% charge, which should equate to a few days worth of use, not that the device is just about to die now, so… a little surprise there. I’m a little let down by this device in general, not because of what it is – what it is, is freakin’ Star Trek technology – I mean, come on – it weighs like an ounce, tracks your using satellites and records your position in real time that can be monitored by anyone – anywhere in the world, but rather what it’s made out to be. If SPOT just stated that, “when the light blinks red – get new batteries, real quick!” I’d just make sure to always have a fresh bunch of batteries ready, but they don’t – they say, “you’ve got 30% charge, so think about getting batteries soon”. It’s aggravating, especially since the SPOT II stopped recorded my position hours before the red light starting blinking and most especially if this device is to be taken seriously as an emergency beacon, which I still think it shouldn’t.