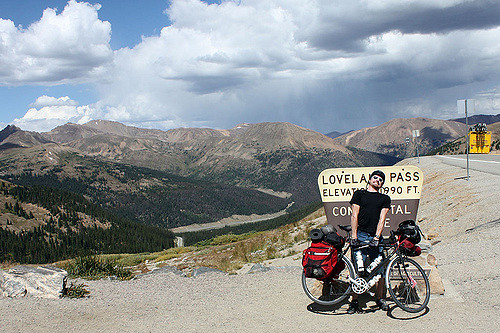 As been my convention and as mileage is slowly being increased during the Month of March, I’m seeking out routes that will keep me occupied and interested – creative minds can bore easily with repetitious activities. If this bid for the Tour Divide becomes nothing but a slog of miles over the same routes for purposes of plotting progress charts, or just simply because it’s easier or I dunno, realistic, to keep some sort of simple training regime – man, I dunno, I’d probably tap out. This is complicated by the fact that I do not have a car, so all my day-rides start and end at my doorstep. Nothing East of Denver has much of an interesting vibe to, I dunno – check out and explore. It just sort of keeps going for a 1,000 miles as The Great Plains.

So towards the mountains I again go. The mountains hold that sort of spiritual power that others talk about when they talk about the ocean. If the mountains weren’t there, I wouldn’t be here, either. I love riding my bike over their passes and climbing on foot to their peaks. I like looking at the ranges from a distance and memorizing the names people have given them. On my bike, I pass smaller peaks that lack trailheads and make up various routes to the top, depending on the equipment I also imagine I have, hoping one day to try them out, given my limited mountaineering skills.

Somehow Wednesday has become another, “Big Day on the Bike Day”, to complement whatever it is I do on the weekend. This Wednesday I decided to see if Loveland Pass was ridable with the go-fast road bike.

Still a question mark, as the elevation almost tops out at 12,000 feet and saddles the Continental Divide. It stays winter at that altitude for much longer than in the lowlands. The route could also prove to be a problem, since plowed snow, drifts and road conditions could be and usually are varied.

The route is fairly simple in of itself, with little variance that can be taken, once after Idaho Springs: just follow the frontage roads that parallel I-70 until after Georgetown, where you actually go onto I-70, until the Loveland ski area and take HW 6 up Loveland Pass.

Bikes cannot go through the Eisenhower tunnel, so the pass is the only realistic choice if you ride a bike and want to get to Summit County further West and on the other side of the Continental Divide (there are other passes that I’ve done, example: Argentine at elevation 13,205 feet – not for the casual rider). The other uses of Loveland Pass are somewhat  varied: tourists come up to soak in the views and take their photo by the signs and in the wintertime, skiers hitchhiking up and ski from a view different faces. And all the other traffic that cannot make it through the tunnel, take the Loveland Pass route – namely: large trucks containing hazardous/flammable materials. So that’s your crowd going up this thing. The tourists were indifferent to me, the trucks were very courteous and gave me a wide berth. The skiiers would give me the thumbs up/fist shake approval. Thanks everyone.

The weather report was favorable – 70 degrees in Denver and sunny – 30 degrees cooler on the pass – wind gusts up to 25mph. Hmm, wind gusts. Coming from the West, they’ll prove a formidable headwind, complimenting the ~5% grade one will experience on their way to the top. And for around 40 miles, remember.  If the Texan from last year’s run of the Tour Divide had the advice of working on climbing (quote: Climb your ass off), I’m certainly following it. Climbing is the only thing I can somewhat do well.  Even at a body-weight hovering around 180lbs, I can climb most of the imaginary people’s that race in my imaginary races to the ground. The ground!

Wind gusts. They certainly were gusty.  Speeds of around 10 km/hr weren’t too rare, between Idaho Springs and the Loveland ski area. Nothing to do but attempt to minimize your surface area and slog through it.

The crux of the climb happens right after the resort and I thought it’d be useful to visit the resort’s restroom. So, I did. Funny to walk in with minimal clothing into a ski area, where everyone is wearing much more bulkier and warmer stuff. And the bike.

The climb itself wasn’t too difficult. As I hoped, the mountain the pass carved mostly on the South East side of the mountain worked well enough to block most of the wind coming from the west. The large piles of snow besides the road did the rest of the work.

On the col, it was a different story, as nothing was there to protect you from the wind. Keeping positive helps, though – and realize that dawdling too long with minimal gear isn’t such a good idea. Taking a silly self portrait to prove I Was There (and I’m not just tall-taling the mileage I’m riding) I was gone. 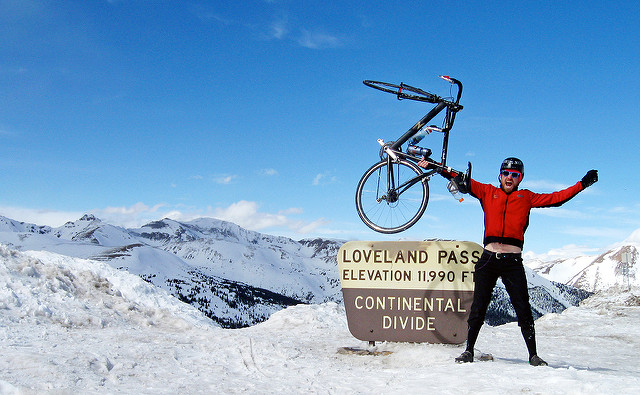 My road bike is, in fact, fairly light – but still pounds heavier than any reasonably new, reasonably equipped ride –  gym-work helps a little bit to hoist the Machine over one’s head. To compare a late summer, fully loaded shot,

Thought about going down the other side of the pass and then riding back up and then home, but The Afternoon Angry Black Cloud that usually forms near the tops of summits around this area was in full effect, so I thought best to get down to a reasonable altitude. My OD was already over 100 km and I didn’t want this day to turn from, “A Good Haul” to, “Epic” – I had Sunday still to look forward to.

Having >6,000 feet of elevation to now lose getting back to Denver  means I’ll hit Mach 3 somewhere along the way – especially now with the wind at my back. Sweet sweet reward for taking such a long trip up.

I again stopped at the ski resort and used the bathroom facilities hot-air hand dryers to dry my socks and chat with some of the more curious skiers. Much words of support for the race. Thanks, everyone.

Travel had to be somewhat careful – especially on the I-70 portions. I noticed quite a bit of debris on the sides of the road – mostly broken snow chains. The maintenance crews on this stretch, it has to be said, do a phenomenal job at keeping a somewhat dangerous part of a dangerous highway in good condition.

I managed to avoid the largest obstacle that surprised me – a giant patch of snow and ice in the middle of the bike path into Georgetown with a spontaneous bunny hop over it. A few more feet and we may have had a different story. A good rush to keep the late-afternoon cramps at bay.

So: Denver to Loveland Pass: Def. ridable on a road bike, if one feels adventurous – not a usual winter fare, unless you want to be made an example of What Not To Do on a bike, in wintertime. A few hiking parts on the trail near Idaho Springs, with all the snow/ice on the trail proved to be impassable. Not to be done, except in exceptional weather. Always, keep an eye on the weather.