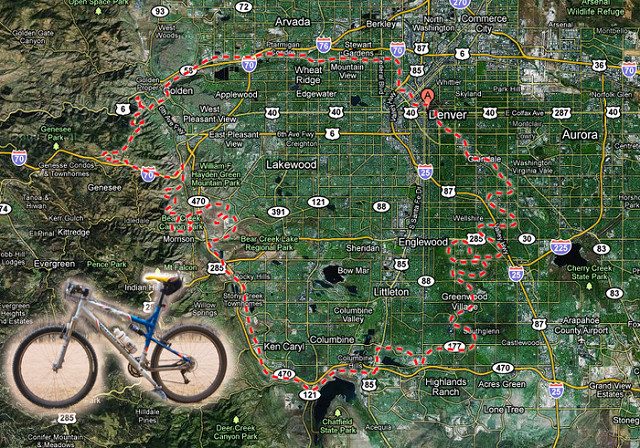 It’s sincerely not against my character to take on major goals completely out of order,  so when I admit to you that I signed myself up for a 2750 mile mountain bike race, without having ridden a mountain bike any appreciable distance since many years before I lost my delicate virginity, you will not find this too startling.

I write this entry about 100 days before the race is set to begin and about 100 days since I’ve
put my proverbial hat in the ring to do it. Even I thought it perhaps time to, you know, ride one one of these contraptions and make sure it’s for me.

One elevating problem that I will need to solve pretty soon is one of funding. I don’t, as it stands have the funds to afford a bike to do this race. So for now, I’m scrimping and saving and borrowing what I can, when I can. For this weekend’s ride, I took out a bike owned by my roommate – some sort dual suspension job of questionable vintage and dubious origin. It looks a little like this: 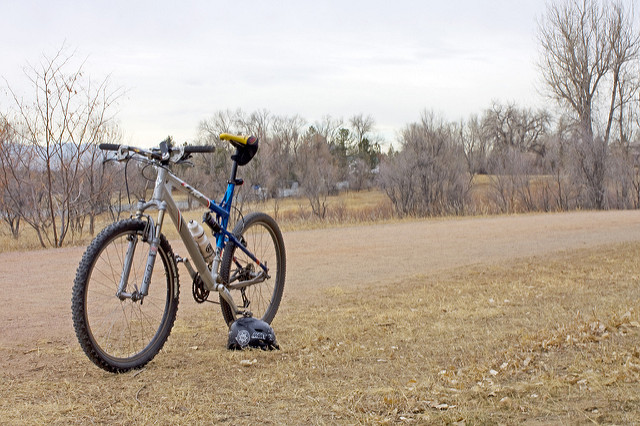 Taking a moment’s rest on the Highline Canal

Found at a pawn shop for less than 200 bones, it’s almost surely stolen, or owned by a very clueless or desperate person. Roommate looked and posted about  finding the bike and looking for the owner. No response. He himself had a very fancy full-carbon fiber job of a bike stolen himself, thus his visitation to the pawn shop initially.

The bike is a little too large for him, so he rarely uses it. The bike is freakin’ huge for me, so I have never used it, until I got the itch, which was this weekend. Did my best to make the too-large problem go away, by, uh, moving the saddle thing a little closer to the handle bars. Questionable worth. I woke up the next day with arms that ache more than my legs protested.

The following will be my report on riding a mountain bike for, basically the first time as an adult. For those who’ve ridden these types of machines for years and years (and given the nature of the material on this site, it’s a good chance you have), you will find it very, very quaint indeed, reading of routes so ho-hum and over-explored and over-used. But, for a pure beginner, throwing oneself into these things was as if the world I knew had renewed and expanded itself.

Sunday, started the ride down the Cherry Creek Bike Path South, watching the weekend warriors battle it out with the crazies such as myself. The Cherry Creek Bike Path crosses the venerable High Line Canal which I took, as its black-topped path turns into dirt and what better way to introduce oneself to off-road riding than this bunny slope of a dirt path.

Perfectly manicured, the High Line Canal noodles its way through the suburban homes of the South Denver environs. If one was to de-focus their eyes just a touch, one could imagine  being in a more civilized country, such as the Netherlands, zooming through tidy little villages. It always astounds me how little visual buffer zone is needed from making one think they’re in a completely different place and time.

But, no. Still in Cow Town. The canal path does give you a little taste – a little wink up the dress of some of Denver’s more well to-do. In short: the houses that line up near the canal path and it’s little ponds and little fields and little patches of trees are immense. The, “NO TRESPASSING” signs are as well. It’s just all surreal.

The pavement-to-dirt transition is easy enough. The condition of the gravel is easy enough to conquer on the most tricked-out road bike. The canal path also has almost no agenda to actually get anywhere, noodling North West to South East as it slowly makes its way approximately South West. My destination was Green “Mountain” (really, just a big pile of dirt, in Rocky Mountain standards) and this path has easily added 10 miles to my riding.

The High Line canal eventually meets the E-470 path, one of the more curious bike paths in Denver. It crosses many busy streets, but requires you to cross most of them, without any convenient underpasses. It’s also somewhat forgettable, as the rumbling from the nearby E-470 doesn’t make much a taste for us with well-trained palettes.  Going this way has actually added another 10 miles to my ride – there’s much faster ways to get to Green Mountain, I guess I just wanted some excuse to do a big ride.

I turned off the trail onto Alameda (State HW 26 at this point) and entered the Green Mountain Park at Forsberg Trailhead, having absolutely no idea where to go from there. I took the right most trail (which turned out to be the one I wanted) and got a taste of some real mountain biking!

Mountain seemed steep. At one point, a man with a frisky puppy was about to overtake me on the trail. On the road, anything over a 5% grade may give someone pause, or exclaim, “Whoa, a little steep here, eh?”. Famous routes in France will actually label the grade, to give you warning and something to talk about, later.

The first thing I relearned about mountain biking is:

#1 Steepness on routes is normal

Well learned! I made my way around Green Mountain’s South and Eastern perimeter, up to the antennae “summit” and down, ever so dangerously (Lesson #3: If you think your brakes are really good, you’re wrong.) West face at around 500 mph, I’m reckoning.

My plan now was to ride South on the path to Alameda again, but this time go West and up to the top of Dinosaur ridge, find the Hogback trail, make a loop of it and sort of, go home, but –

I exit Green Mountain and go over the Highway and what do I see? Surprise New Bike Trail (to me). Called, “Zorrow” Oooh.

So, up again I go, relearning lesson #1 and #2, as I attempt not to succumb to exhaustion as I  well out of shape gentleman bites at my heals.

To my delight, it takes me to the top of the Dakota Hogback and intersects the trail I wanted anyways. Perfect. At that intersection a very conditioned cyclist asks me about the conditions of Green Mountain. I have no idea what to tell him. The truth?: “HI! THIS IS MY FIRST TIME! I LOVE ALL TERRAIN BIKES! WILL YOU BE MY NEW BICYCLE FRIEND?! THE GOING UP IS HARD!” I lie. I tell them its perfect and like, “Shred hard”, or something. I think I actually said that.

Going South, I meet some terrain that’s over and above my limits. The High Line Canal trail was obviously just getting my feet wet, the Green Mountain Trail was a nice leveling-up from there, the Dakota Hogback, at this section is described in the book, Mountain Biking Colorado’s Front Range by author, Stephen Hlawaty as so:

The southern end of the Dakota Ridge Trail delivers some of the trickiest rocky sections found along the entire route. At mile 2.1 there’s a rock face imbedded in the ground. The line to the left requires deft technical skill, particularly as it cuts sharply to the right along the edge of a big drop-off. The center line is attractive but delivers a strong blow to your front tire, not to mention your ego.

I know this beforehand, as I’ve researched the route before I blithely attempted it, green as an apple, with a too-large bike. 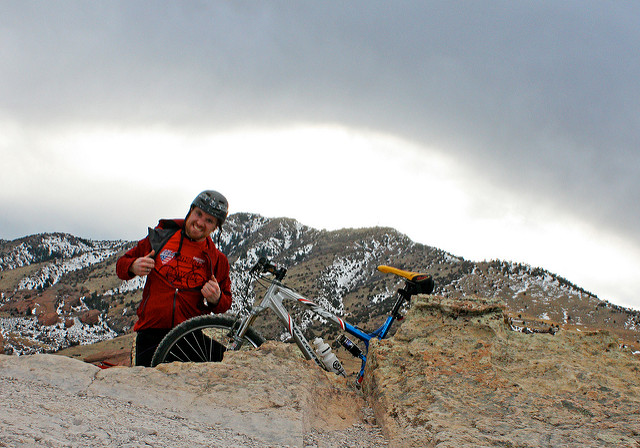 On the Dakota Hogback. Mt. Morrison is in the background.

My attempts at riding the trail without perishing were commendable, but at the end a failure. Failure in the funnest sense, as anyone near me must have thought I was on Nitrous Gas. Having something that seems so familiar and common, the bicycle, in a new form and environment, create so many problems for me to simply go forward led to a childlike exaltation of delight. To be so bad at something felt so good. I was no longer training for an ultra endurance event. I was playing in the sandbox with my die cast model diggers.

A fleeting thought came to me that this must be pretty hard for most everyone. That thought was whisked away as I saw other riders tackle the terrain almost absent-minded. I shook my clenched fist at them. In jest, in jest.

Lesson #4 of mountain biking for me is that I will never, ever compete in a regular cross country event, because I will not be successful. I will fall. I will hurt someone else. I will have to come back to the Hogback and practice a bit more.

Leaving the Dakota Hogback, I traveled North on the Red Rocks trail to the trailhead at Matthews Winter Park, managing to get the bike completely filthy, enough to ruin the shifting capabilities. Lesson #5 is that mountain bikes are fragile and I am not capable of treating fragile things with respect. This being not bike, I made a mental note to do something about the mud that has now encompassed the machine.

Took a left onto HW-40 and the gas station for a little rest and reprieve. Sat outside drinking fluids, contemplating the F-350 parked alongside the place. Its grill was covered with chains, there was some sort of small animal pelt embedded in hood and a rear view mirror with a garter belt snuggly hugging it.

HW-40 seemed altogether now inviting, perhaps I’ll meet similar people at its top? I decide to climb the hill till South Lookout Mountain road in the failing sun and reach it as darkness enveloped the front range.

These means a dark descent down Lookout Mountain Road, which I was anxiously looking to do.

Getting into Golden without incident, it was time to eat again, so I found a sandwich shop that advertised the quickness they can make their sandwiches, rather than the quality of the finished product. I was sold and – I was indeed surprised at how fast they completed the task.

Getting late, out of daylight, lights failing, joints starting to ache and other details to make what I’m about to write seem more masculine, I decide to take a new route home. Rather than simply take 32nd back as I’ve done dozens of times, I decide to try and find the Clear Creek path. A recon mission, as I think it may be a good route to get to Golden in less than perfect conditions (snow!), so that I can train climbing Lookout Mountain over and over.

Couldn’t find the trail until miles east of where it was supposed to start, but found it, eventually. There’s a point where three bike paths converge, in a most confusing way. If it wasn’t for graffiti’d labels someone added, I would still be on the path system. Lucky for me, I found the one that led back to Pecos and 64th and from there, it was just couple of miles to –

A self-serve car wash! I brought a dollar bill with me, which was just enough to power-wash this poor All Terrain bicycle to its former cleanliness. Lesson #6 – always bring back borrowed items in the same or better condition in which you originally borrowed it.

The, “Trial By Fire” Ride

Total Miles: It must be around 75 miles – I really don’t have a clue
Elevation Gained: 2,000-something – who knows?
Ride time: 11 hard-earned hours. 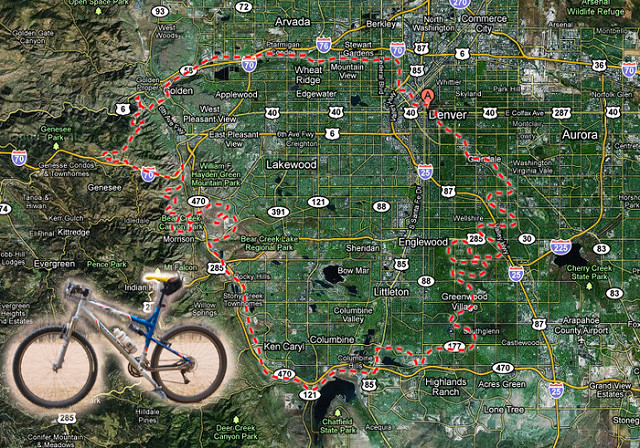 A completely inaccurate path of my meanderings