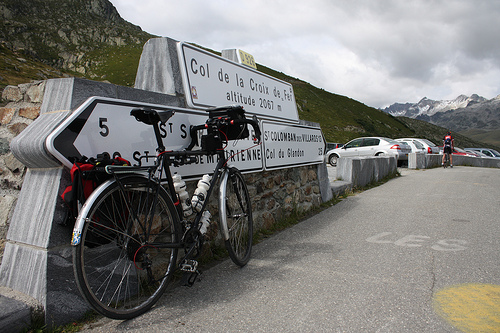 Yesterday was a wash. I went about 60km absolutely dead.

The day before though, I did the Marmotte ride.

La Marmotte is one of the toughest one-day cycling events in the world.

The route is 174 km long, but features more than 5180 metres of climbing. The event goes over the Col du Glandon, Col du Telegraphe, Col du Galibier and finishes at the top of one the most famous Tour de France climbs; Alpe d’Huez.

Here’s the altitude stuff I stole:

Quite the itinerary. The mountains here are nothing like the Rocky Mountains. These things are heroic in of themselves.

Started the ride at 8:30 am. My guidebook says it takes around 7-8 hours. OK – I left early to make sure I have some fudge time. The route is a big loop, so I was able to keep most of my stuff at the campsite, which was nice – this was a ride for the joy of riding.

The first pass Col de la Croix Fer, was difficult – very very steep – but made it – cafe on the top – so, had coffee.

The second major pass, Col Du Telegraphe, I went very very very much too fast and for some reason, decided to go *down* the pass without my windbreaker on.

It had started raining and combined with the altitude, I became so cold, so quick, I almost put myself into shock (I’m not kidding) and had to take 5, before going for the big one, Col du Galibier. 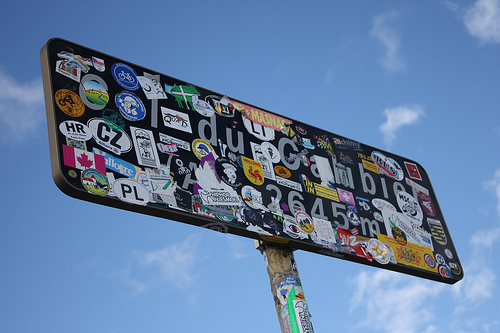 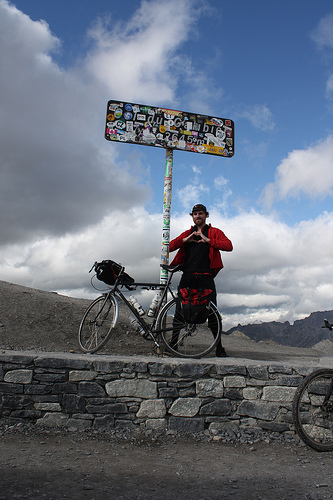 Going *down* the pass was akin to playing, “Survive This*. Narrow Roads. Nothing between you and the side of the mountain and steep – around 10% grade. Couple that with Camping cars going the opposite direction – needing more room than the entire road really allots and it’s so very insane in such a good way.

By this time, I was very much tired and getting to Alp d’Huez wasn’t hard per-say, since Galibier’s pass on the other side is about 20km – almost all the way to the start of the mountain.

I had about an hour and a half of daylight. Do I do Huez and finish off the ride?

Of course I do.

It was Sunday, so I didn’t know where I was going to get food afterwards, but I persevered going as fast as possible up the 21 hairpin turns. Which, was very very slow, as I was very very tired.

By this point I was beyond empty with energy and my body did not like me that much. It allowed me, just because I wanted to so much. I finished the Tour de France route with my head on the handlebars, blindly going up the grade until I hit the finishing line. 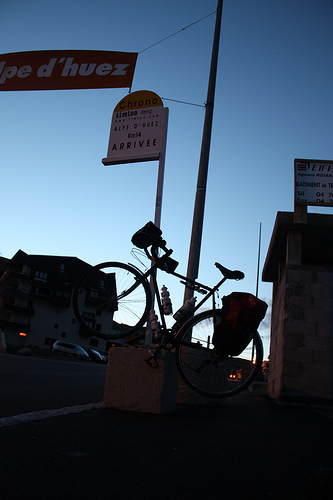 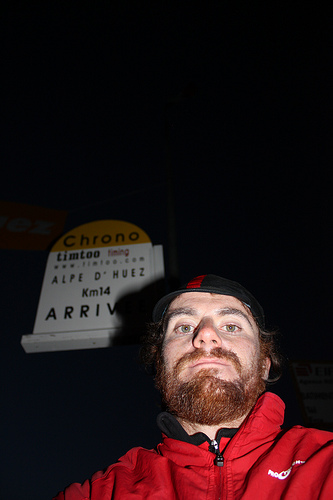 well, then it was dark. And cold. So, I put everything I had on and went *down* the hill in pitch black. It was cold. So, very cold. Teeth chattering… It’s August? I guess I got my wish of cooler temps than what was in Arles…

Went to the Kebab (It was open! YEAH!) place and bought two (last customer – the owner is a very hard working man with a wonderful voice) and went to the campsite, zipped up, ate Kebabs and anything else in my way and passed out.

Probably the hardest one-day ride I have ever done. I can’t even describe it in this post (I have a bit of a cold, so I’m not the best at writing at the moment)

The next day, I took it pretty slow, slept in, made a picnic lunch, had that, got some coffee, planned the route out of the mountain range, etc. Did that 60km on absolute empty and it seems every bag and pack on my bike broke. I’m trying to fix it, but you know the tour is getting long in the tooth when everything is being held together with a bungee chord.

Again, I’ll have to write the above over again when I’m not so numb and not still in the moment, but I’m not joking at saying that was an extreme effort to finish. Props to those who race it. I also have a boat load of pictures to add, but they’re on the other camera, etc. I may have to do a internet dump session while in Basel, as lame as that sounds. Sigh.

Anyways, on to Basel! I’m skirting the Swiss border which is so very awesome. There’s a gigantic lake to my left, Geneva is kilometers away and North of me, the direction I’m going looks desolate of towns. I have a small cold and am plugged up, my gear is failing – Hell Yeah! For adventure.

Missing my friends and working on art though. Paris in a week or so sounds appealing, the tourists don’t. The day or two of flights I may just drug myself through.

Love you all, thanks for reading (esp. Nikki, well of course)

One Response to “La Marmotte”