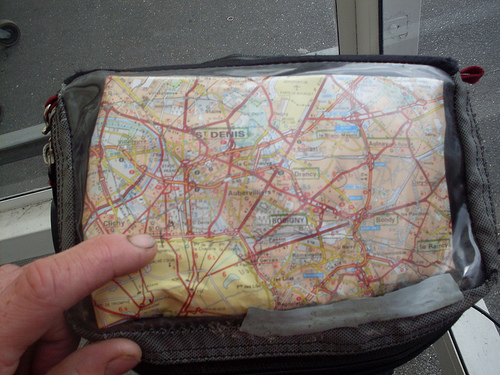 The funniest thing started happening to me yesterday.

Amidst my small sorrow that the ride I was taking was one of my last of this tour and the pain of my spent legs, pedaling up small hills at a meager 9 km/hr for hours,

people started to cheer for me.

Small hills would be accented by small beeps from cars and yells of, Allez! GO GO GO GO GO!!!

The closer to Paris, the more cheers. I must have had a look of most amazing tiredness at the final stretch. 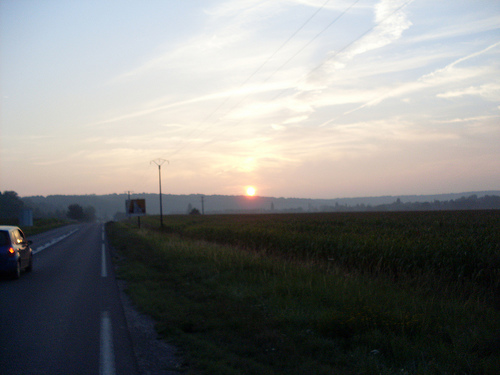 The day turned into night around Meux, France. I put on my lights and slowly inched to smaller roads, ever careful of cars coming towards me. Sometimes, I’d think a car was about to pass, but the light was actually from an oncoming *plane* landing at the nearby airport. Foggy this night and the sight of a giant plane in the sky with lights pushing through the fog, coming at me every 10 minutes is hard to escape.

Last night, I slept in an apple orchard as close to Paris as apple orchards basically *go*, before the farmland I had been traveling the last 600 kilometers – or even since Basel, Switzerland, my last one day break, turns into urban sprawl of countless generations and cultures. General exhaustion, coupled with the sounds of nearby sounds of scooter engines and talking made for a fairly sleepless night.

The relative quiet of everything around me only amplified these sounds, with me never knowing if people were right outside my tent or on the other side of the town. I never know what to do if I was to be found out. Would I have to move? Would they understand? I lost my glasses with the luggage and felt defenseless near blind. I put my contacts in and hid my knife in my pillow; kept half a watch as the other half of me snoozed. Shadows and silhouettes of trees. Did something just move?

This night, counting sheep was replaced with counting airplanes, as they landed into Charles de Gaulle airport, so low to the ground that the sound of their engines shook my tent canvas and the lights from the wings flickered by my eyes., even while closed I tried making a sandwich of Nutella and bread from the morning past, but the bread was weather and travel beaten. And stale. But, it was all I had.

Woke up as early as I could, legs as dead as fallen oak trees, but I pushed on.

The traffic started light, but became heavier and hectic. Scooters buzzing around, taking every which way possible to get to their destination, cars, people, THINGS all around me. And me. Tired, weary and slow. A needed sudden burst of acceleration to remove myself from danger brought sharp pain in my legs and for a minute or so, I couldn’t really move them at all, just sort of faked pedaling.

But it was as if I realized I couldn’t control anything but myself and just pedaled straight into the center, playing the game of a sperm trying to find its egg, trying to reach the perimeter before, before

And then I hit it, 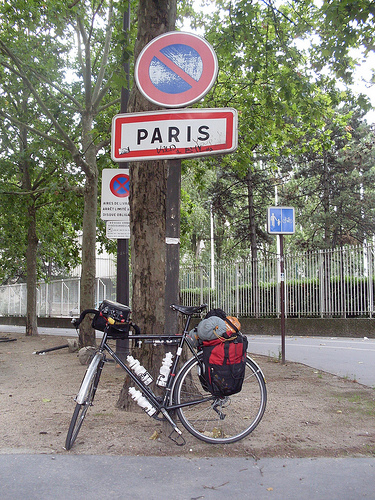 And then I got lost.

So I just went. Straight.

Until I saw a sign that read, “Champs-Élysées” and I f0llowed that sign, onto a small road, congested with traffic and I knew it was the right way to go.

I took a small victory lap and the tour, basically, was done, 5,600+ kilometers and little more than a month and a half later. 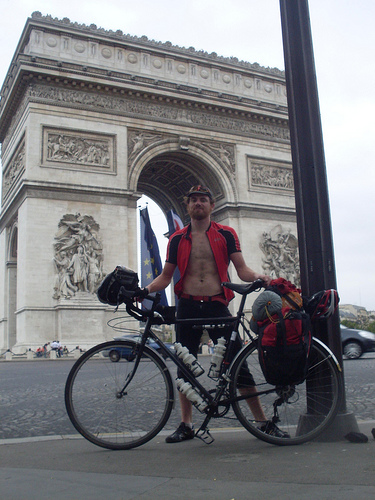 I yelled obscenities at the cars, buses, scooters and whatever else was flying around me making my way around the Arc de Triomphe. If I died here, I guess it would all be OK. But I didn’t die. I wept a little, but that was it.

I found my hotel easily enough and they let me keep the bike in the room (or, rather they didn’t say I *couldn’t*). I walked outside as hungry as one could be and had the most delicious kebab sandwich. I couldn’t eat it fast enough. I then bought a baguette at a bakery. It was so fresh and so warm that steam came out of it, as I bit into its flesh. It, as well, tasted amazing. The metro line was not two blocks away. Exhausted and everything else, I began my wanderings of Paris…

Thank you all for your help.