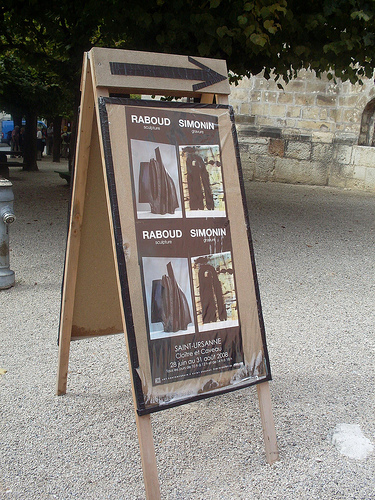 Last night, I was trying to make up time, so I was riding late. At around 22:30, it started raining. I was on a fairly busy road with a shoulder that kept disappearing. I decided to ditch it, as riding at night in th rain is my limit. I happened upon a forest and a underneath pine trees, I found absolute darkness. And peace. 6 hours later, I was back on the road, eating up tarmac on my way West.

For the past few days, I’ve been traveling with little rest to Basel, Switzerland and hanging out there. So many things to mention, so little time. And I am again scatter-brained. Some photos: 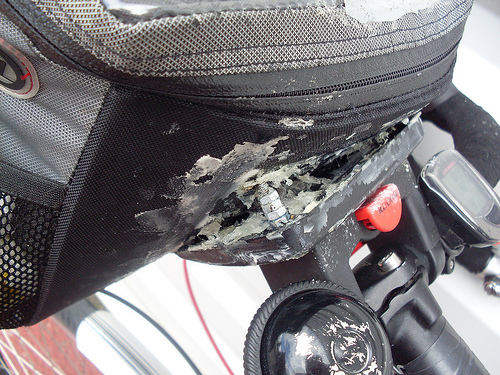 Bolted it back with a bigger nut and a *washer* and we’re in business.

The border of France and Switzerland is a little uneven, and you keep entering and leaving both countries en route to Basel

Finally got lost in a small Swiss town, perfectly preserved with an art exhibition with an artist with a similar last name to mine:

Looked for a map in town to figure out how to get to Basel – the road I was on sort of… stopped at the point my Google Map directions said, “Turn right on, UNKNOWN ROAD”, which should have been a clue I’d have trouble.

Long story (and I’ll get to writing that) short, I broke down and ask the tourist office how to find the road I was looking for and she gave me a (friendly but, ) strange look at went, “What? Look, you’re in Switzerland, we have BIKE HIGHWAYS”. Take #7, it starts around the corner, across the ancient ped. bridge. Hazzah! 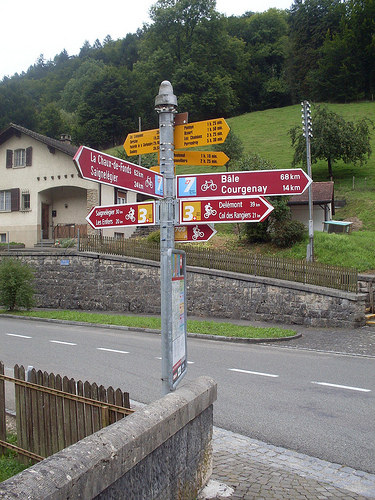 It’s not just that, there’s routes for mountain bikes *and* road bikes, as well as hiking routes and, 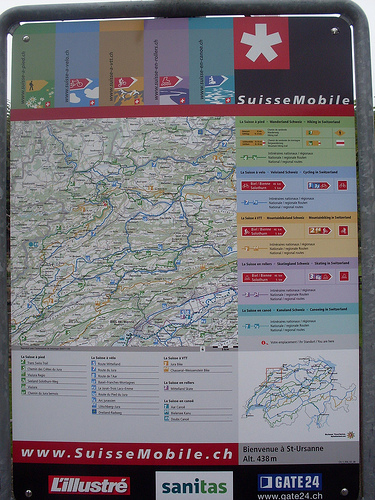 The problem with these paths, is that usually they never give you an easy go to where you want to go, but throw in things like, oh, MOUNTAIN PASSES, which can get annoying if you just want to get to a warm bed.

And, sigh, this one was no exception,

My apologies about that, I was very tired and the last thing I wanted/needed was YET ANOTHER mountain pass. I’m at around 20 for the trip. FEEL MY LEGS! 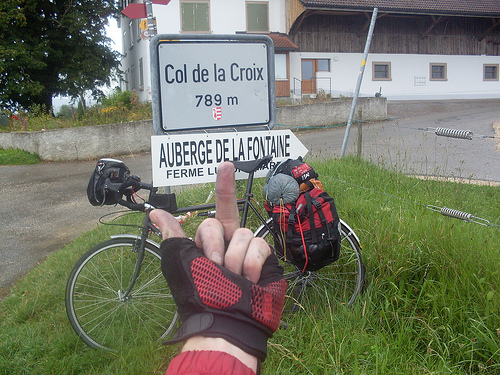 I ran into 2 of them on this bike highway. The second one also turned into a dirt road for kilometers, which is another thing I wasn’t really thinking I’d like to try fully loaded and exhausted, but you get what you get: 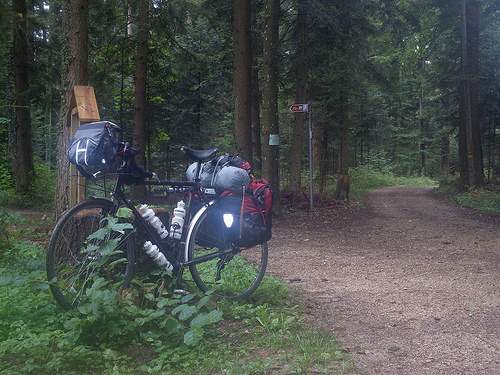 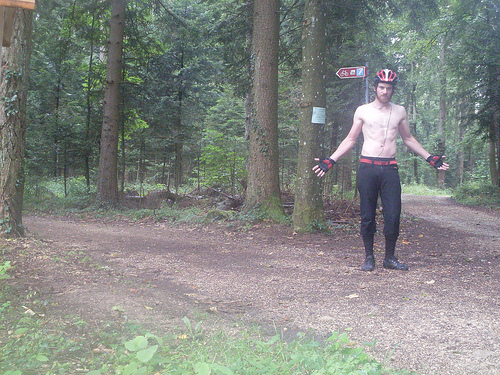 It was raining too, so the dirt was quickly turning to mud. Sigh.

Now, the problem was, I made directions from where I thought I was coming from, not this crazy bike highway.

A little looking around and I realized I was in the area I needed. What luck! 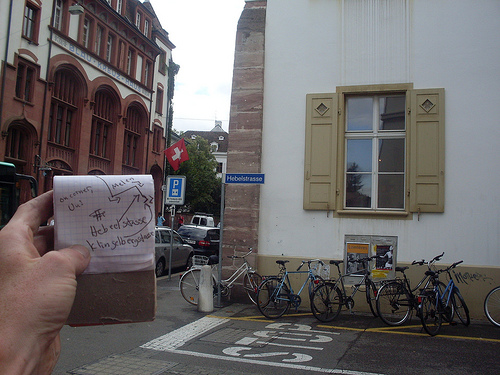 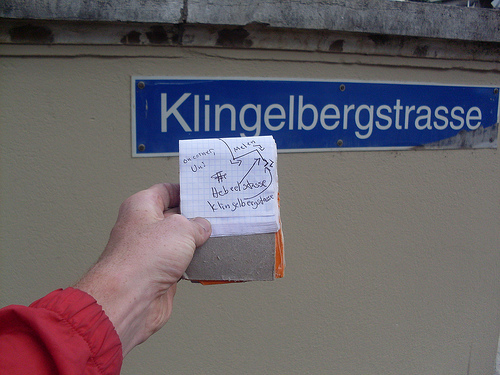 Called up Evan and… he was there! So hazzah! I got to hang out with him for a few days.

A HUGE thanks has to befall Evan for giving me the random and much appreciated email to let me know if I’m in the area that I have a warm place to stay. Yeah! Thanks Evan, and I owe you a beer if you’re ever again state-side. 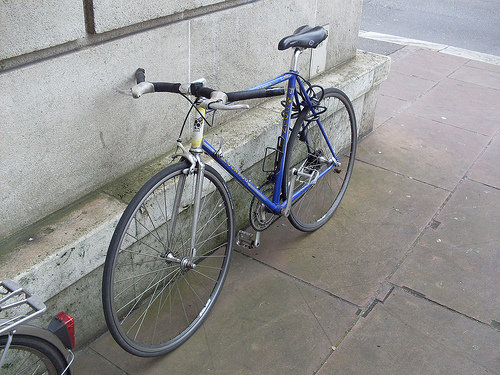 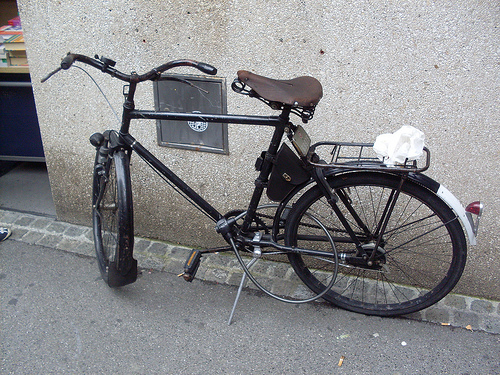 Forget exactly the type of bike this is: 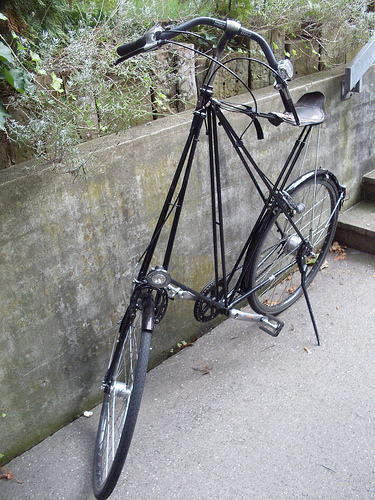 But the saddle works much like a hammock – supposed to be very comfortable. 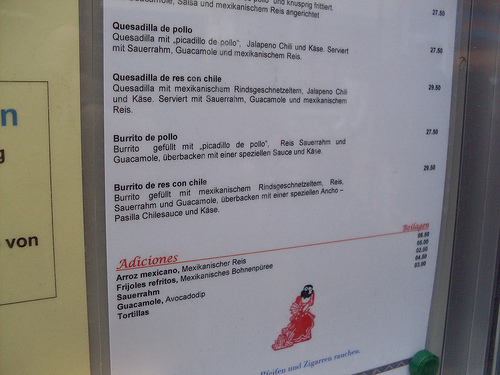 A burrito costs almost 30 swiss francs. The conversion with US dollars is almost 1:1.

I also checked out some Contemporary art spaces and the architecture museum. Some very interesting videos from Mr. Guido van der Werve –

the day I didn’t turn with the world 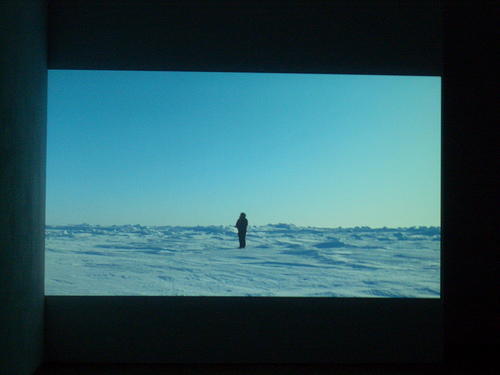 (On the north pole, turning with the sun)

Everything wi
ll be alright: 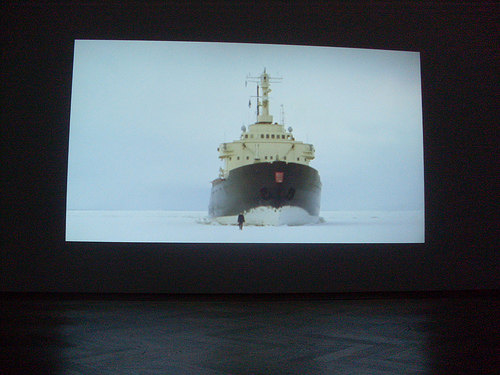 (Walking along an ice sheet, while an icebreaker follows)

After hanging out in Basel, I went back into France to go to Colmar, mostly for this: 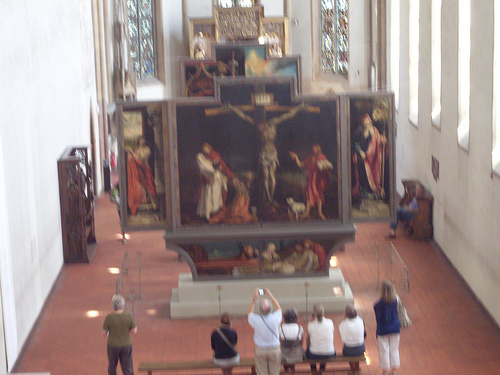 Bad photo, sorry, but this is the Isenheim Altarpiece, by Matthias Grunwald. It’s quite amazing and worth seeing. There were some amazing woodcuts as well. I’m happy I went to this museum.

After visiting Colmar, I kept trucking this time… West!

I have to get to Paris by the twenty eighth and I’m scared to even look up how far it is. But it’s far. And counting today – right now, I have three days to do it. A good challenge and I won’t even tell you exactly where I am *now* to keep up the,

West of Colmar are more bloody mountains. I could go North and attempt to side-step the mountains. It’s a risk, since it adds a little more mileage, but it may be faster than a mountain pass. Is that what I do? 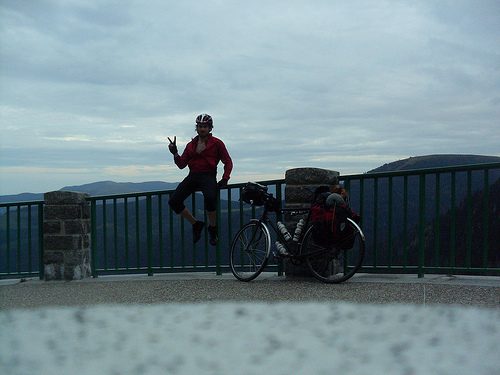 Well, of course not!

Plowing away I did up yet another 1100 meter mountain pass and a few little ones afterwards at night. Like ya do.

So, wish me luck getting to Paris on time and I don’t know how much posting I’ll do until then. But the wishing part, please take advantage on doing that 🙂

Bike highways! An effing magical fantasy land!Do you find that it’s way harder to follow directions when you aren’t really competent enough in the language the names of things are in to successfully pronounce them in your head? I find that I can’t remember names of things when I don’t really know the language. Directions in Quebec really messed me up. Always fun to follow your adventures.

um…wow. I obviously need to go to basel, and around as bike highways are the shit! I found one in Milano that went around the airport, it was a seperate path next to the car highway. I almost peed myself. With all those mountain passes your doing by the time you get back to denver its going to seem flat! (or your going to lay on the floor for days untill you can feel your legs again.)that altar piece is effing sweet. were their any reliquary? good luck sir on your sprint to paris. lots of it in fact..,.

I like the dirt path. It looks so mystical.I also like that still from the person walking in front of an icebreaker.I looked up the mileageof where i think you are, and you can totally make it. I am confident.GO JUSTIN!!!!!!!

@akahn – The problem I’m having with directions here is at those Pesky borders – especially the France/Swiss/German border. There’s 3 (at least) names for, “Basel” – if you notice that sign on the crossroads, it’s (I think) called, “Bael” and it’s called something totally different on the map just below. Sigh. At least for France, finding places has been easy, as everything is labeled. And I mean everything. The entire transportation system is powered by expresso and diet pills. The Spain/France border was a little hard as well, since there are, again, 3 different ways to say the same thing (There’s the Basque Language, French, Spainish and then what I know it is in English) As for pronouncing French – I can’t, basically. So, you try, and you fail. @nikki – It’s one my favorite paintings ever. There’s some other parts of the alterpiece you can’t see and the style is almost new-school tattoo like. It’s just… amazing. No relics, though – this wasn’t much of a church (anymore) @easychaironfire – I’m goin’! I’m goin’!