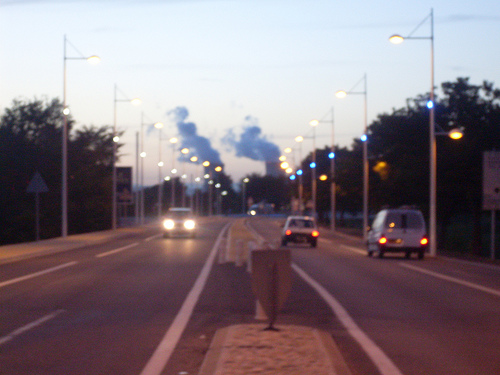 Yesterday, at around 21:00, I decided to just stay where I was. I scoped the town and found a McDUH and a Decathlon. One can get my on the intarweb, the other… a new wheel? The old one was on its last legs – imaging pedaling, but not having the wheel engage for about one full pedal. No good. One day, it’s just never going to engage. So it needs to be addressed. This town is also right next to one of the New-clear power stations of France:

Which everyone seems to have a bad opinion about.

They also had a campsite and erm, poney club. And the name seemed right: 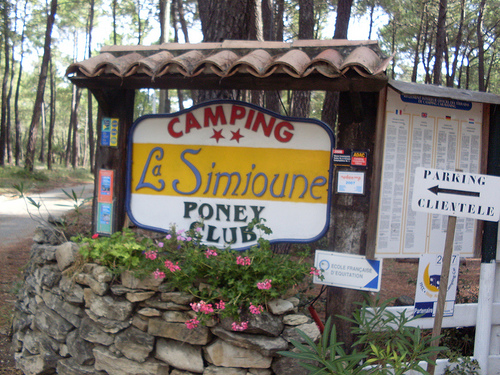 I did not ask if the poney rides were cheap (or a quarter – har har), but it did get that song stuck in my head

Today, I Got Some Things Done.

The guy running the campsite spoke…English! And told me of a bike shop in town, not 3 blocks away from the Decathlon I had scoped out the night before. Which, strangely, makes the town I’m staying in right now, similar to the town about 80km that I Googled yesterday.

So, I checked out the shop. 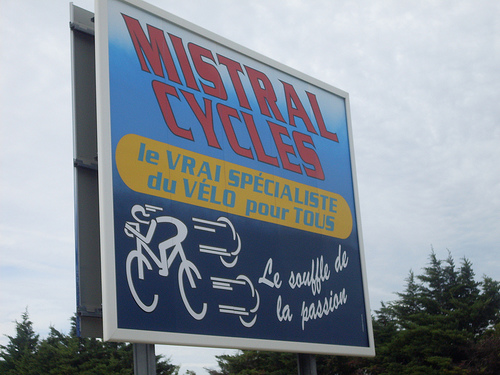 I knew enough French and he knew a little English that we decided the wheel was, se fin. So, I got another one, at an OK price. Don’t know anything about the wheel except it has 36 spokes and that the hub says, “Shimano” – which should get me out of the woods. 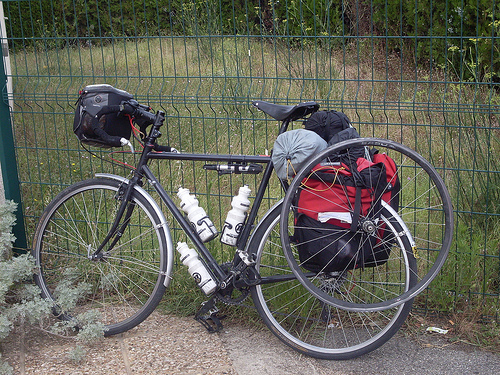 The woman running was patient enough to quickly explain to me I need a box. Une Carton. I knew this of course, but I was hoping they’d have one. No such luck.

So, I dumpstered the bike shop for a box, found one and then, to my luck, there was a… HyperMarche! a block from the Post, so I bought some tape and made a makeshift box in less than 15 minutes in the middle of everything and made it back to the Post with 5 minutes to spare before lunch (where I would have to wait a few hours until *after* lunch.

Again, I knew enough French to fill out the necessary paperwork and had the wheel sent to myself. I pondered on sending it to the bike shop, but you know? They’re probably really busy and I can deal with this when get back, as cheeky as it would have been to have it delivered to them with a, “ne marche pas!” note.

After that, it was back to the Hypermarche for actual food, as I hadn’t eaten and then to the McDUH, where, being lunchtime it was packed.

On the grass outside of the McDUH, I got the wireless connection and made reservations for hotels in Paris and a flight to Dublin and that’s all set now.

A very funny sight though – the McDUHs here get completely packed. If I took a picture, I’m sure everyone here would be embarrassed to be seen in it. I spent half the time as the weird guy, underneath a table making my hotel reservations, as that was the only place I could be and still see the computer screen.

So, away again in a little bit. Wish me luck.

Oh, and finally proof of Frances obsession with Nutella 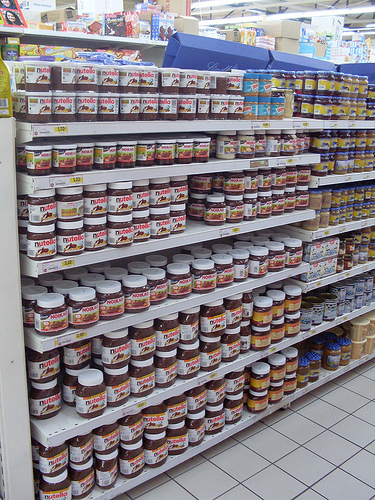 There are 5 jars of peanut butter and 25,000 jars of Nutella. I counted them all.

That first picture is kind of terrifying. (har har, cheeky kid)I dont think anyone in europe eats peanut butter except for traveling americans.( I have a funny story pertaining to this. I’ll tell you sometime.) But nutella, it *is* fantastic and sooo available…and the beard, it has officially reached creepy may or may not murder children length now. especially if your hiding under tables…your hilarious..