Well, yesterday it was a full month of touring.

I’ve gone from Paris, to Brest, Amboise, Sarlat, Bordeaux, Spain, the Pyrenees and now I’m a day or two to Nice and then, well Italy.

Current mood is, stressed out at French tourists (and a really bad place to be that)

Current physical condition: Good! Although my legs need a rest. Don’t know current weight, so can’t tell you if I’ve lost any.

Bike condition: Good! Although the back wheel continues to give me problems. The bearings in the freehub are about toast. After a month. A month. That’s ridiculous. So, as soon as I find a, “corps de cassette 9 vitesses”, I’ll get that fixed up. Expensive little wheel of trouble.

If I had one wish, it would be to just leave France for a day or two, so not to have to deal with crowds, supermarches and having people get in my way inexplicably. One can dream. I’d also like to see a good movie and not badly dubbed American action film.

Yesterday (as the day before), I managed to find MOUNTAINS again – not huge, but mountains mean mountain passes and those are slow and kill the legs.

A few days ago, I noticed cracks in my helmet and the zipper on my jersey broke, so I replaced a few things like those and was on my way. They didn’t have the part for the bike, though.

Mountain passes are fun! on the down part and the roads here are crazy – it almost feels as if one is snowboarding. The hairpin turns, like this one:

Can be a bit problematic,

If one does not stop in time to make the turn.

Yesterday, I also happened upon a…. waterfall! Which makes for a good spot to eat lunch, 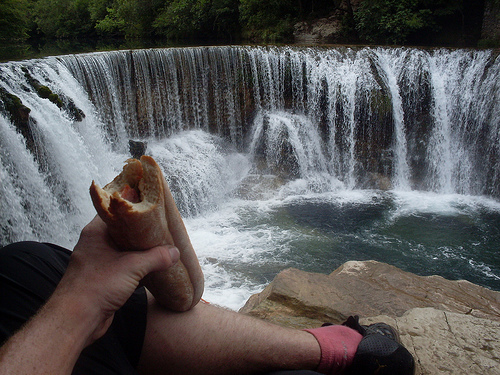 There was even an aqueduct of uncertain lineage a few meters away which was wild.

Speaking of aqueducts, here’s a roman one, 6 feet shorter than the Roman Colosseum I saw this morning:

This is the largest arch the Romans ever made:

Some graf from back in the *day*

So, the rest of the day is slowly exploring Arles and then, heading to Nice. If I find a campsite, I’m stopping to rest the dogs and take a well-needed shower.

Last night, I stopped after around 140km for… pizza! And then follow signs to a campsite. It turned out to be 19 Euros!n Which wasn’t happening. I just kept going on the road towards Pont du Gard in the rain and found a somewhat dry spot and made camp. Pretty loud as it was near a docking station for one of the larger hypermarches. Kind of, one of those places the French don’t want to think about having.

The night before was a similar story: I stopped after a good 100+ km (a lot of mountain climbing) and had dinner. This time it was cos cos with an undetermined meat (I just read the menu and picked something I didn’t know). Followed signs for a camp, but lost the scent, so hunkered down at a rest stop near a turn about. Loud, as there was traffic fro 3 sides, but it’s also pitch black, so I got what I got.

There was a scooter dude that kept coming in, about every hour to shine his light in my direction. I was ready for him to kick my tent, so I could kick him, but French people I guess don’t have any real gaul – they just kind of act as if they’re tough of something. Didn’t make for good sleeping, I don’t think I’ll camp in a place like that again!

aw man! those pictures are all great! congrats on a month of travels! When you get back you should have a party for the destruction of you back wheel.Also let me know what places you plan to go in italy. I may know someone you can stay with. If you get a chance and want to go to florence, the People In seici whom i love, are amazing and you would love them, you should go visit and hug them for me. because i miss them. luckluckluckluck!!!

Ever so sadly, I don’t think I’m going to make it to Italy – perhaps in the Alps if I get lost 🙂 Give me good curly hair vibes about my back wheel, I’ve about murdered it.

darn! next time I go you”ll have to come with then! I left a bit of my soul in those mountains and I should visit it often.and the curls are well, curlier, so you should have plenty of luck. and when you do get a new rim, you should really show the old one who’s boss…