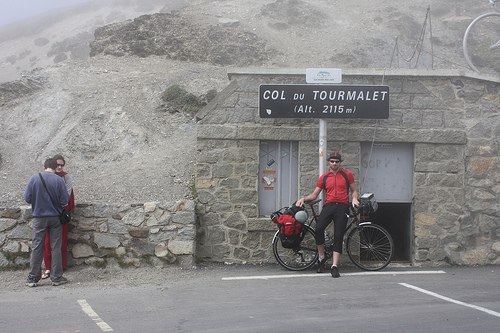 Last night, I slept in a wooded area, after riding around 200km from around Lannemezan. That night, I spent in a cemetery, right next to a crypt and a giant church, with even giant..er bells gonging every 25 minutes. That day was around 100km, but included 2 mountain passes.

I am pretty much spent, so it’s a day off in Albi.

Albi had one thing I was interested in – the Toulouse Lautrec Museum. And, although small, it was nice, but now that’s over with and to be honest, I don’t know where to go to, next. I guess I’ll kiss the South Eastern part of France and make my way North, on the last leg. I guess. We’ll see. Suggestions?

I feel so bad, as my mind isn’t very clear – When I say, “Tired”, I mean my legs are refusing to work anymore. All I want to do is to lie down – so typing on a computer is pretty close. The rest of tonight is finding some cheap-ish food and a campsite (got a map with one on – so no problem there). What I feel bad is, I want to relate to you, *right now* my experiences, but I think this is impossible, it will have to wait. I simple cannot emote them in the way I want. But, I can give you snapshots and write. Write snapshots.

So, here’s some of that:

The highest pass in the Pyrenees I happened upon. Not so hard. It’s very funny to think the mountains at home are so much larger. To give you an idea, this mountain is only 1,000 feet higher than where I *live*. It’s 15 miles to a higher point from my doorstep.

This day was overcast, so I didn’t know what I was climbing up, until, well, the clouds parted ways: 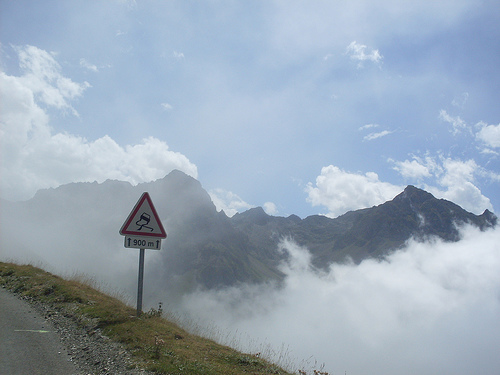 Which, you have to say, is pretty cool.

It took forever for the weather to pass. What to do? Well, this is France, so what you do is grab a cup of coffee and watch the weather (literally) 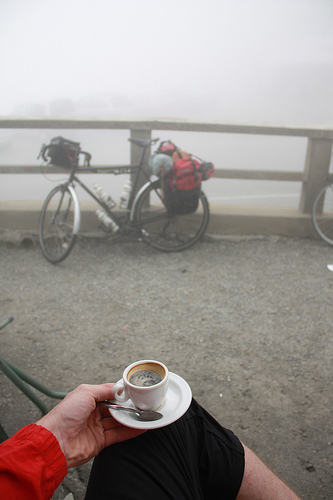 One thing is for certain in France, if you want an expresso – anywhere you are, it can probably be had.

The cafe I was i also had vintage bikes on the wall. There was one that caught my eye, that had a, “retro-direct” drive. You pedal regularly for one speed and *backwards* for another. Here’s the back:

I’ll have to make one when I get back (now that I’ve had a good look). 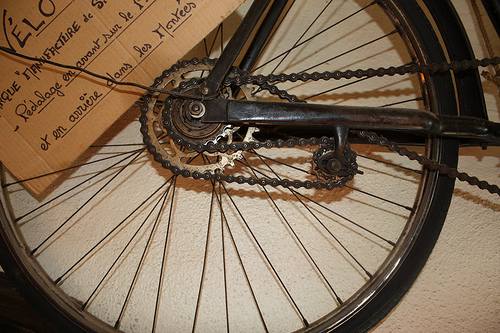 The trick is that pulley in the middle. Hmm.

The last mountain pass for me in the Pyrenees: 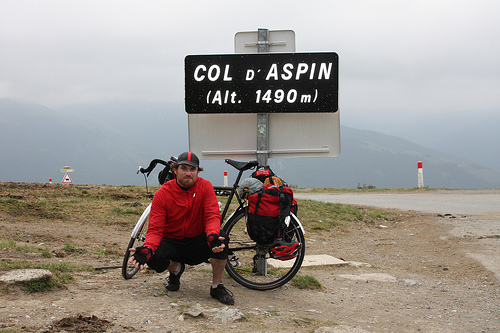 No problem. But, as you ca see, the weather was still not so good, so my plan was to take the rest of the day and cycle as far out of the Pyrenees as possible, hoping to beat out the storm.

I met the storm and got wet, but did manage to go *through* it entirely and made camp in a very small town’s cemetery. Why there? The small rocks that made up the ground were dry – dryer than any grass in the area. It was also below the ground level (you go down steps) so no one could see me. I gained access by a small, unlocked door next to the church – usually cemeteries are closed after around 19:00 – I went through the side door, I guess. And that door was another little veil from me and the outside world.

On the steps, I had a most wonderful picnic of a cheese and chorizo sandwhich, potato chips and.. .cookies! Food is a funny thing – it tastes so good for different reasons. At that specific time, that food was the best food I had ever eaten in my life and I’m not the biggest fan of pork. The cheese, which I’ll never know the name of, was the best cheese I had ever tasted.

Food is also a very expensive thing in France and I’ve been eating out of Supermarches as much as possible. On my day off, the day before this, I did go to a restaurant, in hopes of getting a pizza. French pizza is on a flat bread and they do crazy things with it, like put Foe Grais on it. But, they’re usually cheap and fattening – which is what I’m looking for (and it’s hot food, for a change).

I went to order the pizza and the waitress told me, “Only for dinner!” and I went, aw, crud, since I didn’t want to order from the 15 Euro menu. But, I did. And the food? Well, it was *alright*. The salad was just lettuce with tuna, the duck leg was a little overdone. It came with, well, fancy french fries and onions (which was the best thing on it) and a small dessert. Would I pay 15 euros for it again? No. It was forgetable.

That sandwich in the cemetery – not as forgettable.

One more thing about food – on top of that mountain pass, there was a guy, selling cheese out of the back of his van. Of all places. Cheese is like drugs to the French. He was even given out little free samples. The visual on it… sigh.

When I bushwhack, I don’t really think it’s prudent to take too many pics of the campsite, but the light at 7:00am at the cemetery was beautiful: 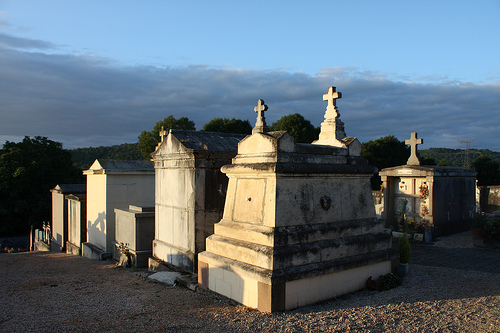 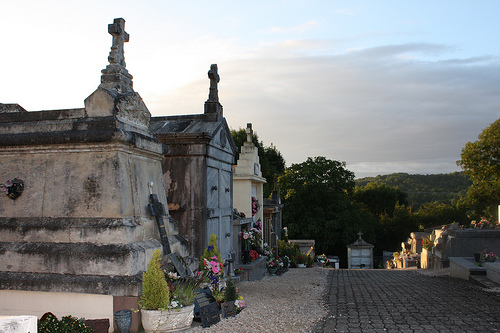 I slept, as they say, “Like the Dead”, although at 7:00 there was a plethora of gonging going on and I was out of there post haste!

The next day was nothing but pushing pedals I guess – very tired legs going very very far. The day started at 7:30 am and ending at 10:30. I couldn’t find a good place to camp for a while. I wouldn’t ridden all the way to Albi, but they closed the road I needed for construction, so I just ditched on the side.

OK, time to find some food before the shops all close.