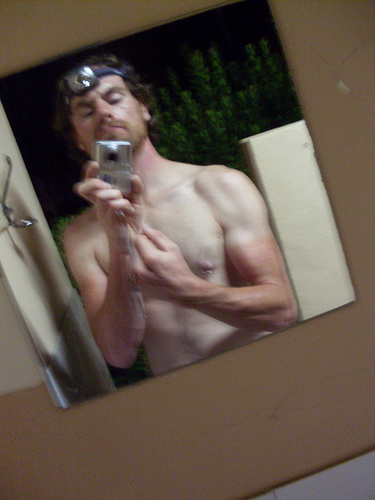 A couple of days ago, I pushed into Spain! Crossing the border gave me the sense of being knocked out and not knowing my name. Again. One side of a river – France, the other: Spain and it’s a totally different world. I went west until I hit a part of the road I couldn’t ride a bike on and went, “Hmm”. It was around 21:00, so not much more riding could be done, anyways.

Luckily, there was a Hypermarche and a campsite, so I got some food (bought a map!) and made camp.

I looked to see where the Guggenheim was in relation to myself (about 9km from San Sebastian).

So. One, long day there, one day at the museum and then, a day back to the border… hmm.

I opted to skip this little side leg, in the hopes that if I do have extra time, I can spend it in Amsterdam with friends. And three days is a lot of time on my time scale right now.

So, the next day, I got up and went back East right to the border and then… South! into the Pyrenees! I’m currently in a town called, “Oloron Ste-Marie” and have already toppled a few, smaller mountains. Before me are 4 big ones, 2 of which I may get to today, or just got to the base. Getting pretty tired in the legs there, so we’ll see. Slow going, as it’s, well, it’s a mountain range.

Really excited to be here, though as this is the type of terrain I’ve been looking for.

Last night, I must have looked a wreck, getting into camp at the base of the Col d’Osquich, as a couple with their son from another tent came by and offered me… wine! And then more wine, and then dinner! Which was incredibly kind of them, as I was just about out of all food but the bare essentials of a few pieces of crummy bread and peanuts.

Beautiful campsite, overlooking the mountains, small and quite friendly campers as well. My thanks to that family – in the morning, the son even gave me a cup of coffee. Over and above!

From the day after surfing:

that’s the tan line. And those things that look like muscles aren’t – it’s all sinew, tendons and bone. 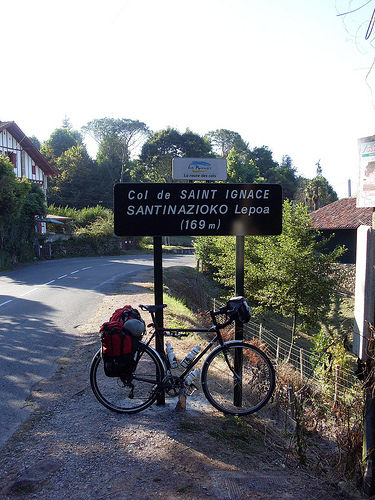 Right now, I’m in the Basque region of… well, the world – it’s almost a country within another country, complete with their own language, called, Euskara: 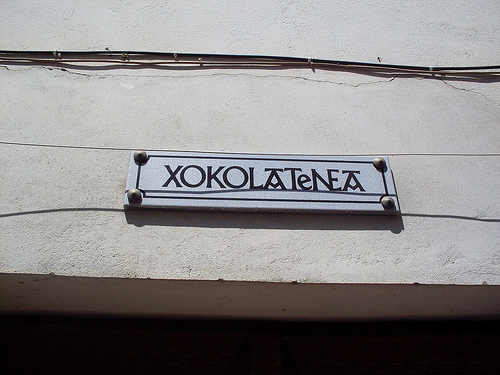 Depending on what you’re looking on and where you are, it’ll be the only language of whatever you’d looking at. It’s very funny when you see advertisements, completely in Euskara. Lots of trucks are labeled in this language – and almost all use the same exact typeface. The weekend I rolled through seemed to be festival weekend and I got caught up in many a festival celebrating the culture 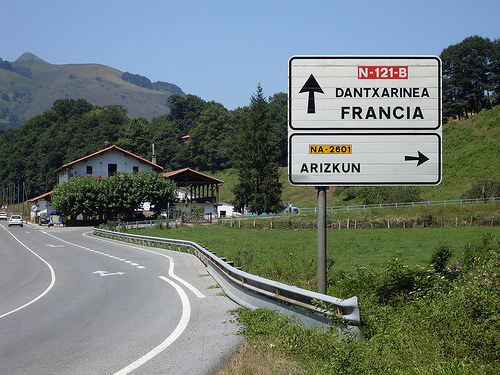 “Francia” is Spanish, the other text is the Euskara version of, “France”. Yes.

Some more type – one of those graffiti messages: 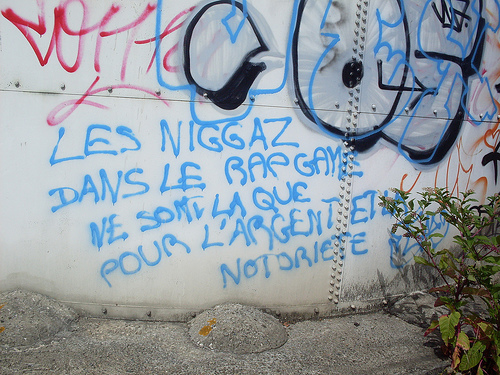 Notice, “Niggaz” is feminine. I’m trying to figure out if, “rap game” means, “to play rap”, or if it’s a term for doing some freestyle rapping. 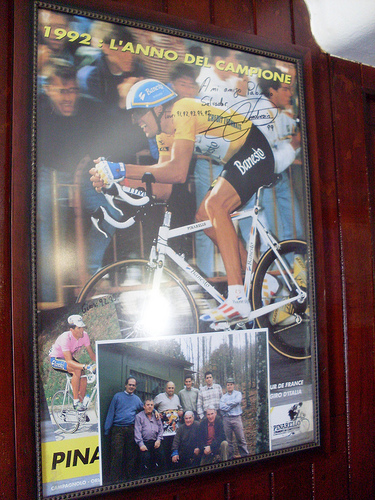 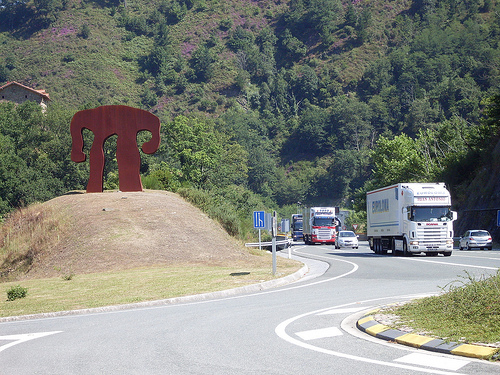 A giant sculpture on road N121 in Spain. 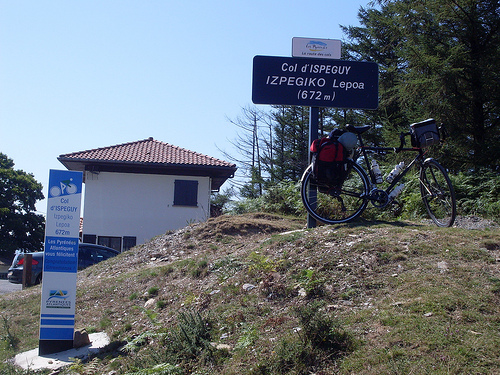 Another mountain top’d!: Col d’Ispeguy – 672 meters – still a baby. The view from the top was incredible, though. The ride down was scary as… all hell. There were all these warning signs at the top that basically says, “you’re… gonna die” and then they stop and the road twists and turns – no safety anything after that. 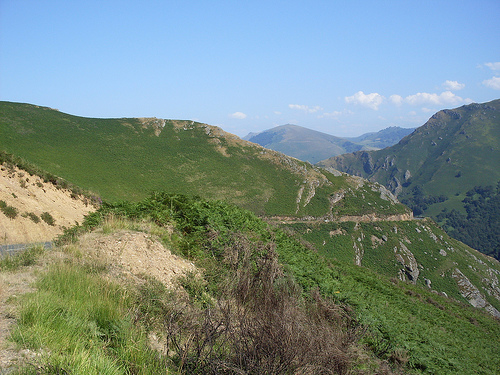 Today, I was riding up another mountain and there was text, painted on the road itself – no idea which language this is: 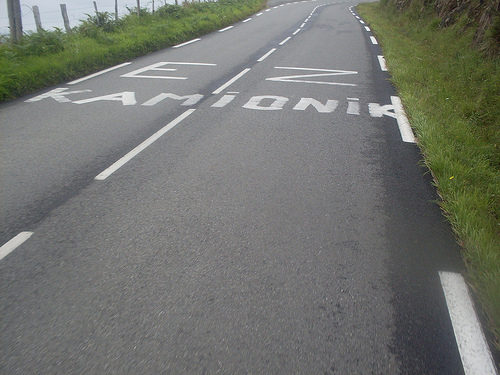 I bet it says, “Take it easy, champion” or something like that. 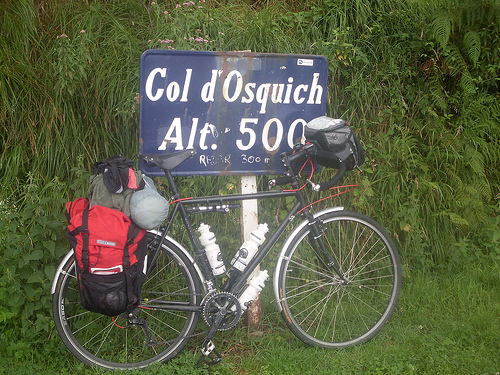 Alright. Away I must go. Wish me luck!

I like the tan lines, they show that you put in the extra effort in surfing. and the view photo is really beautiful. the sky is so blue i wouldve likely fallen off of my bike and any one death turn to look at it. have you seen the triplets of belleville? I picture you coming back looking like one of the bike riders in that. all leg muscles and appetite.good luck with that whole mountain range thing!

@easychaironfire – that’s so awesome. @nikki – have you seen the triplets of belleville? But of course! I’ll be looking like that – I have the nose! But I’ll be bearded and I need a little old lady with a whistle to follow me.