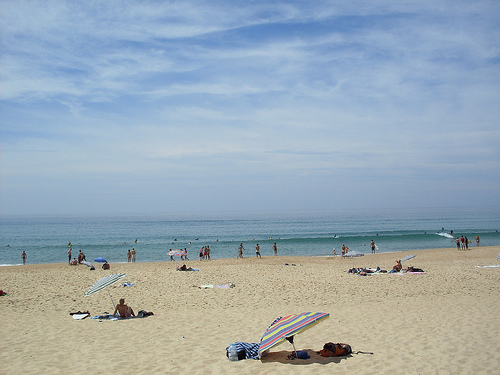 I freakin’ turn the corner in the road and it’s Southern California. I park my bike next to a sand dune and an ice cream shop, pass the surf school stand and up a bluff and I see this:

The scene looks like San Diego, except the water is warmer and not so polluted – and it’s SO BLUE and SO CLEAR. The beach is, well, French with French rules (wink wink) and the sand is so hot on my poor feet and the water feels so good.

I stay and watch some of the most mellowest surf roll in – slow and easy to catch and the wave median is about 5 feet, I’d say.

So I pack it up and find the board shop, and tomorrow, I’m renting a board, a wet suit (more so I burn horribly – and I will, burn, in less places) and I’m going surfing – all day. I’m at this cyber cafe mostly to find what the surf report is. Between the cyber cafe and the board shop is a… cinema! So, tonight, I’m going to watch a cheesy movie dubbed badly in French. Somewhere in all this, I’m going to find a campsite as well. So excited.

Yesterday was a very very long day – not so long, but crazy mileage – 183.1km – The area south of Bordeaux is something like a forest – the roads are very straight and the terrain is incredibly flat. I feel somewhat like the scene in Dumb and Dumber, thinking the South of France has, I dunno, “Mountains” or something, and finding this – as if someone is full of shit. The, “forests”, upon close inspection, aren’t forests at all! The trees themselves are extremely young, of only a few species and are planted in neat little rows. I think it’s a giant farm for wood. 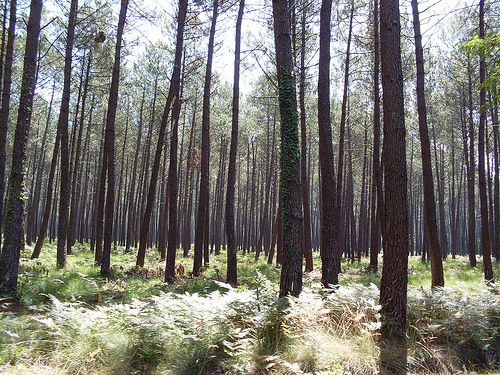 Um… here’s a cathedral – and my bicycle! And the foreground is the cafe I stopped to have breakfast: 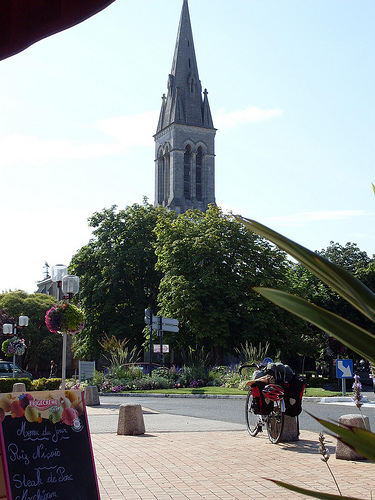 I rolled into the campsite very tired and got a space. It was a circus – popular town, I guess. Everyone in board shorts, with surfboards – you really do have to do a double take sometimes. There was a bar at this site, so, I said, hey let’s get a beer – that’ll help with the horrible pain of my sore muscles, that just did 100 miles fully loaded.

I sit down and realize they’re about to do Karaoke. In French! So amazing. So I get the waiter and try to tell him and I want a big huge beer and not a wussy beer that they usually serve – and they do serve the smallest of beers around here.

He makes some weird arms motions – as if s zing up a freakin’ tree. I see, “yeah, ok, whatever, I’ll take a big one”. Grande Biere! Which is what Rick Smith fuckin’ told me to say.

He goes to pour – but comes back. I mean, I guess it’s THAT big. He asks for 24 Euros. That’s… I’ve never order a round that was that much.

I go, “Uh, not that big, tough guy”. I look around and see a guy with a mohawk and go, “Monsieur, “mohawk”” (he has a huge liter of a beer – as if he just stepped out of a ’76 London Pub) . I don’t think I did a good job explaining – he goes and gets the manager, who gives me the, “What’s the problem, this huge thing is what you ordered, correct?” And I do my, “I barely know what I’m talking about” rap

It occurs to me just what exactly I ordered.

They have these… almost mobile beer taps – 3 feet high, with a spout at the end. About the diameter of a gallon paint can – but much higher. Woah boy. Oops. Las Vegas my have something similar… but I’ve never seen a pitcher that you keep on the *floor* because putting it on the table would be a hazzard to your health, if it pitched over.

Anyways, a server butts in and says something to the manager. The manager tells me, “Hey no problem” (he was getting a little short with me) and does the motion you do if you steal a base in baseball successfully (safe!) He comes back, with a mug-o-beer and we’re both happy. That was close. I guess someone actually ordered what I actually didn’t want to order.

So, with beer in hand, the show starts. And it is hilarious. Seeing French people do karaoke to ABBA, in English, is special. And I’m not putting them down – they’re *great* at it. It’s just,

And then I realize how so amazingly educational this is all for me. Here I am, watching French people talk French, while the words they’re talking go across a giant screen.

I learned so much just sitting and watching.

And at 23:00, I was sleepy, so I went to sleep. Everyone else, loudly, did Karaoke. Amazing. Usually, campsites have quiet hours. This one had none of that jibber-jabber. It was almost like camping within LA (USA) County – but even they had quiet hours. No bother to me though, I could sleep through anything. And I awoke at around 8:00am to even more noise. Incredible. Again, no worries, I had to get up anyways.

So. Tomorrow, surfing the Atlantic from the other side – I couldn’t pass that up – all day and “resting” mon chiens for a day, before a push into Spain and absolutely no idea what to expect. I can tell my Spanish – all four years of classes, will slowly come back to me and I just hope there’s a campsite I can find, or I can bushwhack it with no problems. The only business I have is to get the, “I’ve been to Spain” merit badge and to visit the city with the Guggenheim. Lame, I know, (I guess?) but Spain is another trip entirely. I got a local map, since my main map has no small roads into Spain – but now I have that.

After Spain, it’s a solid maybe… week? in the mountains, as I take the route through the Pyrenees to Toulouse – I’ll be doing I think stage… 9? of this years tour de France backwards and hitting two or three of the famous mountain passes. In terms of what I usually do, they seem the size of what I trained weekly (or bi-weekly) on, so I’m not too concerned of exploding, or anything, but with my gear, it may be a bit tough. But I’m excited. The actual stage is 2 or 3 summits, so I’ll break it into 2 days itself. I don’t have anything I want to do in Toulouse, but right next store is Albi and Albi has the Toulouse Lautrec museum, which is absolutely required for me.

After Albi, I’ll check on time and if I have enough, it’s a push South and West for Nice and a dip into Italy, and then North, all the way to one of the main things I’m looking for:

The most famous tour stage mountain of them all. The route I’m going to do is a 180km loop starting near that Alp, but going around and hitting two other summits, including the highest alp in France and ending at the 21 hairpin turns of Huez. I’m getting some sort of accommodation, so I can do the route without bags – which will make it a million times more fun and I can finish it in a day. So excited.

After that? North to Paris, I guess. Stay
for a few days… some where? And then North to Amsterdam. Depending on time, that’ll be via my bike, or by train. We’ll see.