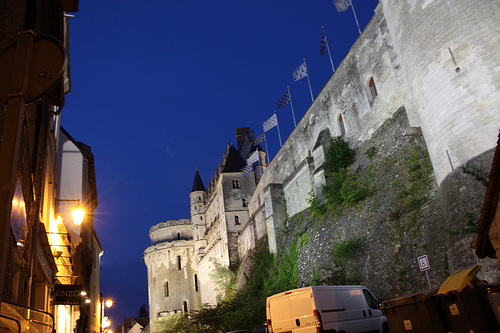 I’m somewhere between Bergerac and Bordeaux, France, heading toward Bordeaux, with not much interest in checking out the city. I’m hoping South of Bordeaux will be beautiful. The current scenery is dismal.

Yesterday was a day off! From cycling and I took the opportunity to get up really bright and early and get in line for the 40 or so tickets that are available to see one of the last open caves filled with prehistoric paintings. The most famous one, Lascaux, is CLOSED and has been, since about the 60’s. There’s a copy-cave for hungry visitors, but who wants to see that? Me neither.

And that doesn’t happen with me. I got up at 6 and was actually there by 7:00am, very nervous, as I thought I’d stop by the bakery and get some food. But, when I got to the line, there wasn’t any, so I opened up a book – not really knowing *where* the line was going to be. I thought I’d just queue up where the first person was.

And in about a half hour, the first people came – Jolly people from Belgium (I think?) that knew three or so languages, so we could all take pretty well. So, we all had fun waiting for the person to open up and when the line did queue (and with a bunch of people getting nervous about their place in line) they made sure I was the very first person in line, which I thought was really nice of them and sort of cute. I blushed.

And, I got a ticket, for something any respectable person would have reserved months in advanced. And I also got a ticket for another cave, filled with etchings – so two caves were on the itinerary, instead of one. Yes!

I went to the first cave, first – called Cambrella (which is a beautiful name) with a group of 6 other people, plus the tour. I have to say these etchings and paintings look 13,000 years old. Not much left, but extremely interesting.

The second one – Font de Gaume – almost didn’t happen! The last tour ended about 15 minutes after I was supposed to meet up for the next cave (If you’re not there early, your ticket gets re-sold! But I tried to explain and the women by the gate didn’t think of it as much a problem, so I attempted to “run” up the hill, 400 yards up to the entrance in time to start. Running, erm, walking fastly, was hard, but I made it.

I think the only thing I want to op about, after saying how fortunate I am to see these drawings (only 120 people are allowed in Font de Gaume per day) is that – well, I was thinking that everyone was missing the point, but the point was sort of wheeled around. These drawings were seen as, “drawings”, or, “Etchings”, but what’s really amazing is that they aren’t – they’re a part of a larger installation that includes the cave itself, their inaccessibility (the actual area and the crawlspaces in the cave itself) at the time, the lighting (by torch), etc. That’s what I found so wild – it’s all site-specific. The drawings themselves were using the contours of the wall to add to the piece itself – which they noted and the guides also noted the the three dimensionality of the surface was further used when the lightsource – a flickering torch, was applied – the shadows would go all over the place and make the drawing sort of, “dance”.

Forgive my mind, melted from countless hours in the hot sun, while riding on the tarmac, but it seems that installation is very old art form – and is one of the main forms of art , up there with dancing, music and, probably… jewelry? I think most everything we do now is an ancestor of those things – or parts of those things. Crazy, init?

The rest of the day, I ate copious amounts of food, practiced my French in the cafe and lingering around the campsite, on top of a hill overlooking everything, up a 3km road.

That 3km road, the day before, wasn’t a treat at 21:30, when I had been riding for a good 11 hours, tired from some long rides in the days before. It actually almost killed myself, getting up, but I got up, so no worries. The rest of that day was just more of getting lost and a few more small hills to get up.

After my last post in Amboise, I went looking for the cinema, to see a cheesy movie, badly dubbed, and I ran into a… 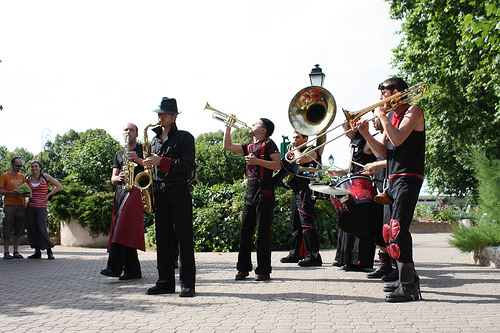 Marching band! And they were great – I realized they had the same color scheme going as I have and felt a little silly, taking pictures so close. But I love marching bands. I seriously do.

Here’s a night photo of the Chateaux in Amboise at night:

After Amboise, I went to another Chateaux in Chenonceaux that was completely a waste of time for me. I kind of just wanted to see the thing – not go inside. But, to even look at the Chateaux, you have to pay, and it wasn’t much, so I thought, the heck – I will.

It was flooded with tourists. And European tourists suck. They really do. They photo op. everywhere and just like to get in the way of mild-mannered people like me that give people room and all that. I’m preparing myself for the Louvre and the way I’m doing this is to learn to put on a mask and be like one of these tourists. It’s the only way I’m going to get close to a few of those paintings. Sigh.

Anyways, it’s pretty and all: 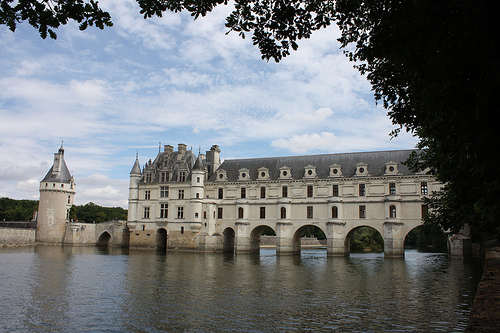 And there was a modern art exhibit on the top floor, there. And modern art isn’t my favorite. The guy who was showing was a colorist – lots of spans of… well, monochromatic color fields, with a dash of color and impasto here and there. The colors were great and all and his background for theatrical stuff was really great – and his use of push brooms for his BIGGER work (which wasn’t shown) was kinda also cool, but the show itself was ho-hum and was filled with loud tourists. The book on the table of his other work was glued to the little stand it was on, which I thought was silly, so I didn’t check his other stuff out. I kinda just got out of there after I finished lunch. Ah, well.

One of the towns I camped at, had a velodrome just a little ways away: 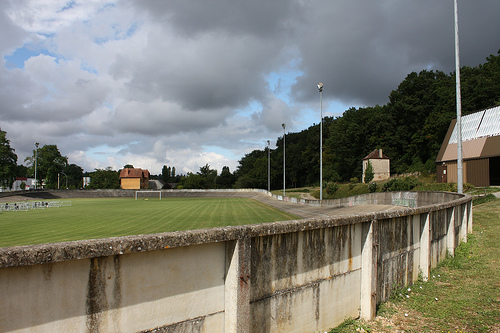 Which is a treat, coming from a country with I think, 7 or 13 in the entire country. This is the second one I stumbled by and it, like the first was in pretty bad shape – we’d rant about the cracks for hours if it was here. I didn’t see any riders on it – and didn’t ride it. Some people were setting up, what looked like a race for Saturday (that day) and they weren’t really in a talky kinda mood.

So that’s that. I good spirits, bike is in good shape – but I got my first flat! After about 2,000km. Not bad and patched up, just fine.

I think the plan is to go West until I hit the ocean and again and then south, until I hit, well, Spain and then stop in Spain for a day or two – mostly for the Guggenheim and maybe, if I can find rental boards, surfing and then that’ll be my second leg.

From there, it’s East into the Pyrenees and do some epic tour mountain stages and take some dopey photo ops, so look forward to that.

Not sure what Nikki
is talking about, but my beard is certainly at least at,

“Security now stops me and asks me for my backpack” length. I’m starting my rap sheet for a reply to when they want to security check me – Something like, Si Vous Plait, Monsieur. Je suis vingt sept ans. est-ce le barb? Ah, le barb – Je suis un voyaguer, J’a camper, Ja ne dance pas en un discotique... or something like that. The older I get, the more I feel at one with my father – who had a tremendous beard. It’s not just that – it’s the way I look in total – the way my hands are molded and how the wrinkles are forming. It’s my thought trails and my ways of solving problems. There’s major differences, but the older I get, the more I feel as if I’m just an old sailor, on a small sailboat, somewhere in the middle of the Atlantic, all alone, sans for a little brown dog.

Anyways, I have to get the grammar correct and all, but it’s a fun exercise when I’m in my camp, about to go to sleep. And they have actual discoteques here, *called* discoteques. It’s awesome.

Salut! Dunno when my next update is. I had to stop today to refill the copious batteries I have (ipod, camera, phone, computer) and I don’t know what to expect in the near future. Sometime soon is the first, so it’s time to make sure money is in order for my rent stuff back home,