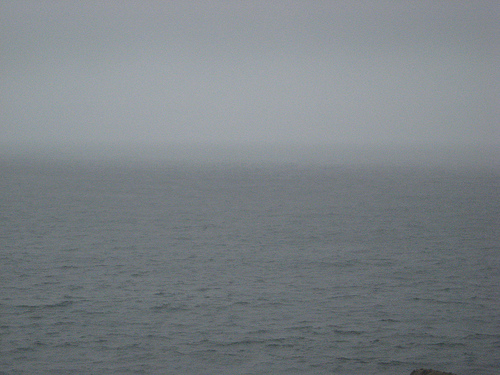 Brest was interesting – I had lunch there and dawdled around downtown for a bit, but didn’t stay long. I had lost my knife the night before and it’s a requirement to have one – so I found an army navy store and bought a nice small cheap one. A little momento from Brest I guess and a little connection to Querrelle, which is really one of two reasons I even know about Brest (and a knife plays a poetic role in the book). The other poetic part is the build of Querrelle and his Brother – both being almost exact in size and shape. I couldn’t help but to look around and notice that almost all the navy servicemen in the area had the same build: completely compact – but also WIDE. Very bulldog like. My first turn down the long hill towards the water was to the Naval base – which ended at a gate with barb-wire and a lonesome gaurd who stood attention (attend…ed?) as I approached – as if I was going to just fly through. I turned around, actually and made the long ascent back up the hill, just to go down the same hill a half a kilometer later to the actual downtown.

I zoomed around the bay and checked out the huge wall , and visited the castle there, which had a maritime museum. I opted not to go in – it was only 5 euros, but if everything is in French, it may not be too fun. I thought most of this city was destroyed by allied bombing to keep the Germans from using it as a U-boat port (crazy idea), but the castle was still there and that huge huge wall – don’t know how much has been rebuilt since then.

Played around the port and took some pictures. Was somewhat chasing the ghosts of that Genet book, but didn’t find too too many. I think traveling is a lot of chasing after long-gone ghosts – at least that what I seem to do. San Francisco for the Beats – well, a lot of places for the Beats – I even moved to the Boulder/Denver area for that connection (a few pages in On The Road, basically).

The other thing Brest is known for is a long-distance cycling event called Paris-Brest-Paris, where you do a long path from Paris to Brest and back – 1200k in all, in which you have to complete in 90 hours. My route was similar – I went from Paris to Brest, but I sort of rolly-polled it, able to capture over 1,000k in… a week? A little less than a week? More than a week? I’ll have to check my notes – but it wasn’t 90 hours. That’s a tidy time and the next time they do the event, three years from now, I may, in fact, be ready. I’ve done 300k in 20 hours, which itself is probably as fast as I need, but that’s a lot more time in the saddle.

The tour de france actually had its first stage as well, so I search for rements of it and road a few km of what must have been the course – it’s pretty easy to figure out, even without looking at the map. Which was fun.

Yesterday was dimanche and almost nothing is open on dimanche. I thought ahead and bought enough emergency food for the day, but I have just so much space to store food and my appetite is large from mashing the gears. At around 8:00pm I was both tired and hungry and the muselei I had with… water? didn’t seem to appealing. Ran around the town I was in and nothing is opening.

Rode to the canal – and there he was.

I picked up 2 of his Kabobs, which wasn’t what I’d call it… more of Gyro – anyways, the, I called it GOOD and fulfilled the needed protein I desired in the form of twice cooked multi-meat. Had dinner by the canal and road to the outskirts of town and made camp in back of a Hippodrome, complete with cornfield in the middle and white stadium seats.

Even *earlier* that day, I missed a turn and found myself lost in Carhaix-Plouger, France and ran smack into a… Town Festival! with thousands of people. I walked around, but didn’t know what they were celebrating or what the celebrations were. I couldn’t hear any faint feedbacked and echo’ing sounds of a large stage, so I guess, no music?! Weak Village Festival!

There were Frat kids looking dumb and people with fake rastafarian hats (and hair) as well as activists giving out fliers about living care free (to me, even), as well as the gypsy kids riding in old army transport-like trucks. One girl was hitchhiking the other direction and I was hoping to get out of town easily, but I got very lost. No worries really, but the first part of the day, je roulais en socquettes légères. and when you have a good thing going, you just want to keep going. Awww well.

A lot of people were camping and camping everywhere. I really wish I knew about the festival beforehand and planned my trip to hit it, but, aww well, next time. I got on course and made around 167km for the day. Fairly tidy. Pretty tired today, of course.

As of directions to go… I’m heading South. South East actually, to Amboise, France – outside of Tours, to tour the da Vinci pad. Then, it’s south some more to see the cave paintings and then…? Probably to the Pyrenees to hit up some of the tour routes (and over into Spain?) and then East and then I don’t know. I always have one eye on the amount of time I have and is why I’m trying to get more mileage a day (by hopefully, getting up eariler), but there’s just so many hours I can do, at a steady pace without blowing out.

As for injuries, I managed to cut my thumb on my new knife yesterday (DRRRRRRR) and my left knee has been giving me problems, I’ve been working through. I moved my saddle’s tip up a fraction of a centimeter the other day, which helped the pain for a while, and yesterday, I upp’d the saddle by less than a centimeter and I haven’t felt pain from it all day (for two days) which is, great! The arch in my right foot hurts – probably because my shoes are incredibly floppy and the back of the peddle platform is biting into my foot. Not sure what I’m going to do about that yet… I still only have 9 gears and I’ve become a firm believer in friction shifting, for no-bs touring. It’s pretty nice to just know how much to hit the little flipper to get a the right gear. I keep losing my lowest gear and I have to use the barrel adjusters about twice a day – my shifter cables are very whack.

Dunno what the rest of my day will bring – just riding – hopefully to a somewhat larger town and maybe a day off, since I don’t think I can make it to Tours without one of those.

One Response to “Le Mer!”