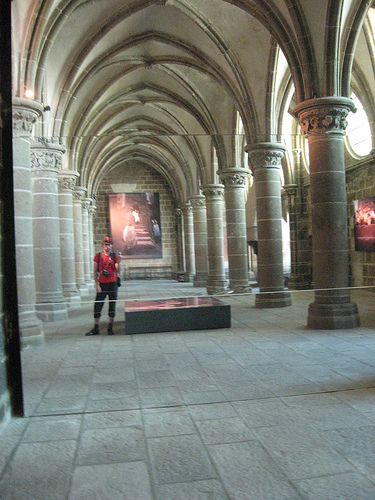 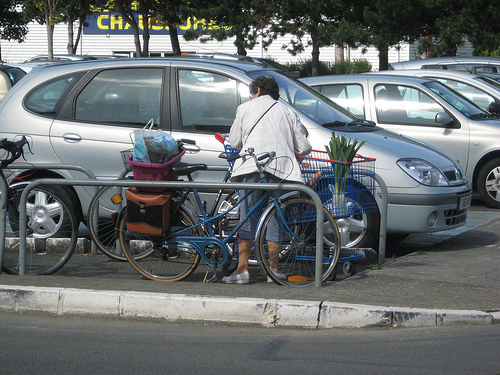 I am pretty much in love with the old ladies on bicycles here – they are the primary bicycle culture that I’ve found. This one is getting out the hypermarche. She has an old lady bike and I want you to note the set of panniers and the basket on top of her rack. He cart was pretty full – notice the bagguettes and a huge thing of leeks. Here bike is about 35 years old, mixte frame and about 4 gears. It rules. If old ladies can do it here, anyone can do it in the states.

Some graf next to the bike path, underneith a highway. Nothing really interesting to report – except the layering of writing over is incredible. If I saw one writeover in Denver, I would think that a turf war was about to erupt in that area.

It seems to be a little different, at least in this town.

There’s some wild style, some cartooning and a long message to…? Probably, another writer. Seems a pretty safe place to do all this.

Here’s one of the lower chambers in Mount Saint Michel:

Nice vaulted ceilings. There’s a few hundred feet of similar rooms above me, which is an interesting architectural feat – which, I’ll get into in a later post. Most of my pictures here are with the big camera, and I don’t know if it Flickr takes the RAW format natively, or if my camera is writing a JPG version at the same time. Time will tell! 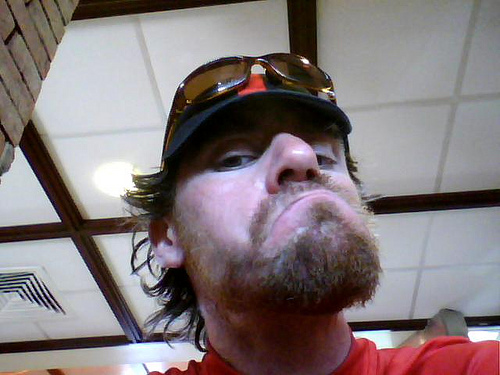 I’m forgoing shaving, to work on the beardage. At the end of the tour, I’m going to look incredible.

OK. Time to fly to Brest and the Westerly end of France – and the end of headwinds for a while! Looking forward to that. Got some warmer clothes today, so camping should be pleasant. I may even opt for a two star camp site for the shower. I guess we’ll see. I may work on my askance of campsite from the farmers, just to sleep a little better.

2 Responses to “Some random photos:”