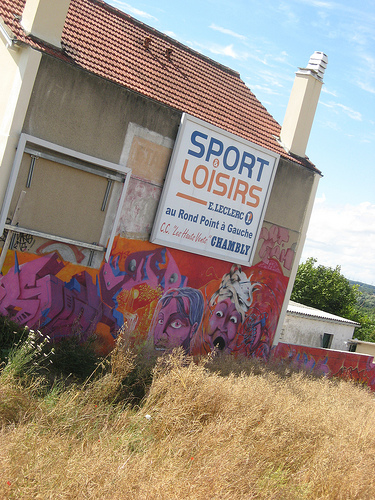 This is in the middle of nowhere, but shows some of the graf art you see around here. In this one, you have your ordinary “Wild Style”, which seems always mixed in with cartoon characters. In this case, Disney’s, “Aladdin”. I’ve also seen strange purple smurfs and things like that. This piece looks like it was commissioned. It is strange, as we are in the middle of almost nowhere and it doesn’t really fit it.

A lot of the other street art I’ve seen is somewhat sad – it’ll be just somsone’s names – or even notes to other writers. Sometimes it’s on very old stone buildings where you really wish it wasn’t there. Trees seems to be a likely target for whatever reason.

Taking the train to Paris from the Airport, you do see a gigantic run-on sentence of tags, which is a spectacle in of itself, but the letters are all pretty plain and almost all of them are black outlines with white fills. In Paris, I did see things like Dunnys and vinyl toys for sale. I’m not the hugest fans of these things, but it was funny seeing them sold alongside minatures of comic book characters in comic book/video game stores.

I’m sure if I dig further, I’ll find better things. Any suggestions?