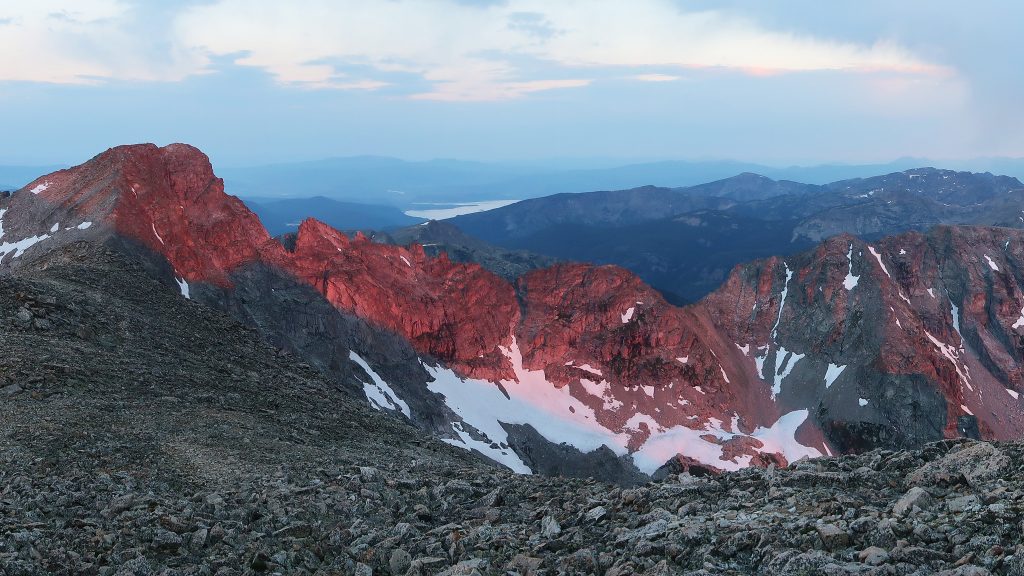 The mountains along the Continental Divide provide the backdrop to the city I live in: Boulder, CO. From town, nothing can be seen beyond their sheer, rocky, glacier-choked east faces and the ridgeline itself invites one to come explore their craggy features, beacoup exposure, and long expanses of carpeted-in-tundra plateaus.

From Milner Pass located in Rocky Mountain National Park, and Berthoud Pass closer to I-70, one will find over 50 named points and peaks. These passes are about 45 miles apart as the crow flies. No other paved roads are found between these two passes and no other roads – paved or otherwise, can be crossed via motor vehicles. The rest is mostly National Park and Designated Wilderness. The wandering ridge, if followed exactly at its apex, is around 75-80 miles long.

I was surprised to find in my research that there hasn’t been a recorded report of anyone traversing this section of ridge proper by foot. This seems extremely hard to believe, as the concentration of runners, backpackers, mountaineers, and world-class climbers in the area is very high, and the line itself is obvious. It takes a special blend of ultra-running fitness and technical climbing skill to be able to safely traverse the ridge.

And traversing this ridge seemed to be a perfect project to take on this summer, as I made it a goal of mine to explore the mountains that are found nearer to where I live. What was exactly found out there? I was embarrassed to say that I wasn’t as intimate with some of the sections of this ridge as I was to far-flung ranges found in other parts of Colorado or even in in say: Alaska. Connecting up the areas I knew with areas that were unknown to me was an extremely exciting proposal.

Because of the technical natural of major sections of this ridge – there’s literally miles of Class 3/4/5 scrambling/climbing to be found, it’s not really realistic to onsight the majority of the ridge, as I had done for the Mosquito-Tenmile Range, and the Sangre de Cristo Range. Instead, I took most of the summer to reconnoiter and wander various sections of the Divide ridge piecemeal, before committing to a solo, unsupported, no holds bar, sang froid run through this entire section of the Divide as quickly as I could.

On Wednesday, August 12th @ 12:22am, I set off from Milner Pass. 89 hours, 11 minutes, and 34 seconds later, I had reached Berthoud Pass, having completed my goal of traversing the Continental Divide between the two passes, staying right on the ridgeline the entire time.