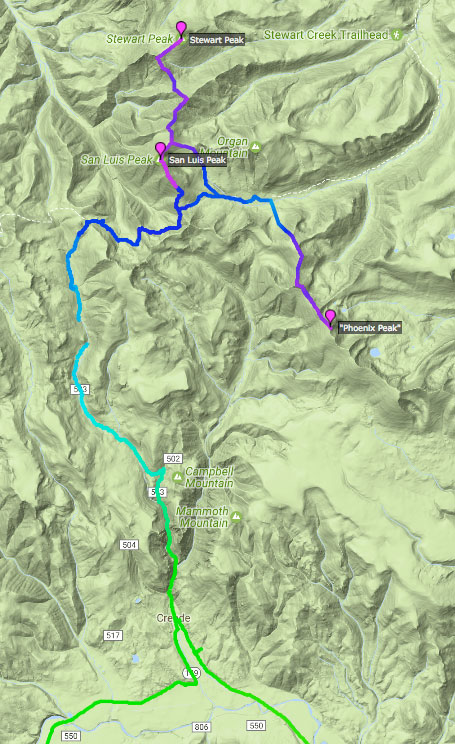 The San Juans hold almost a third of the entire Centennials to be visited on the Tour of the Highest Hundred. The mountain range itself is spread out in a massive area, where roads are few, and approach is time-consuming.

Going into the San Juans with a plan will help ensure success in this range. Here’s my draft on my tour notes:

The San Juans are approached from the east, and are visited after completing the Sangres. The first town you’ll travel to, after the relatively mellow ride across the San Luis Valley will be Del Norte at the edge of the range, then Alpine, then Creede. Any of these would work well for a resupply, but Creede is closest to the trailhead(s) we’ll need, as the Centennials to visit are north/northeast of town.

My itinerary for this group is to try to do them in one trip starting from the West Willow Creek trailhead. San Luis/Stewart are obvious linkups, but “Phoenix” is somewhat an outlier in the group. My plan is to drop back to the CDT, then keep going south, following the ridgeline until I hit the bump that is, “Phoenix”. I’m hoping that this ridgeline will go, but I doubt I’ll have time to do any proper recon beforehand. The other option is to do “Phoenix” separately, using a more standard route for the peak, beginning at Phoenix Park Trail.  I’ve mapped out the route, and it’s less mileage to link it up with San Luis surprisingly – even without adding in the time to ride out from West Willow Creek trailhead, then ride to Phoenix Peak Trail. Given the mileage of all this, I may bivy near the CDT after San Luis/Stewart, then going for “Phoenix” the next day. I remember on my 14er tour getting be-nighted on San Luis, with a beautiful sunset on the summit itself.

The hiking alone on this route is almost 30 miles, 11,500′ of elevation gain, so it’s quite the trip for three peaks, even if the terrain is relatively benign. Rocketing down to Creede to eat everything in sight is a nice thing to look forward to. 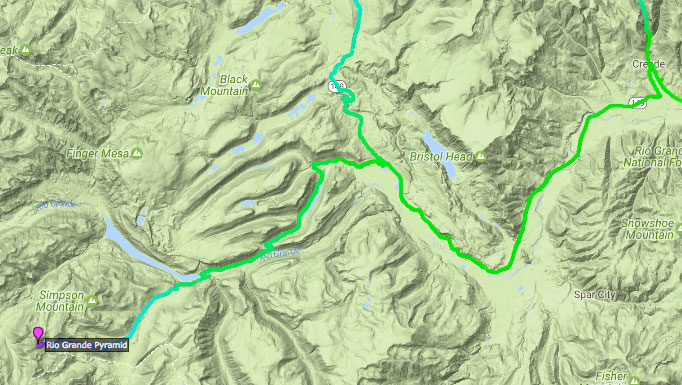 Once the Creede group is finished, it’s an easy highway riding to the Thirty Mile Campground TH of Rio Grande Pyramid – this trip should be a nice recovery from the last three peaks. Hiking: ~8.5 miles, ~5,200′ elevation gain. 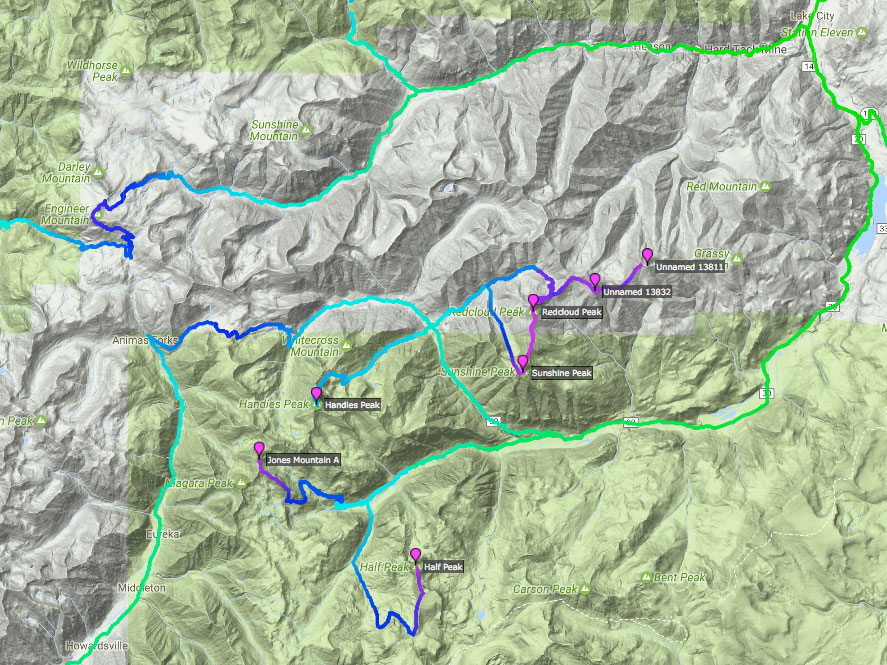 More (boring) highway riding the Lake City, but that’s soon to be replaced by the Alpine Loop: chunky, loose, dusty, crowded, and filled with 4WD drive enthusiasts. Stressful riding, and any hope to recover on the bike will be dashed, as the mountain passes that one has to cross over on the route exceed 12,000 – and sometimes 13,000 feet.

This will tour the San Juans in a general clockwise direction – mostly to visit the Weminuche sooner rather than later – but there is some flexibility, just in case the weather looks dire.

The first two mountains to be visited will be Half Peak and Jones, both from the Cuba Gulch “TH”. Then, it’s up the road for a peak bagging marathon: UN 13,832/UN 13,811/Redcloud/Sunshine and then on the other side of the road: Handies. I’m visiting Handies from this side, rather than on the American Basin side, as I may make it a requirement to follow the 3,000 Foot Rule (or some sort of modification of that rule, and the America Basin TH is just too high. The 3,000 Foot Rule isn’t realistic to enforce for the Centennials (start 3,000 feet below the summit of the peak when hiking) – but perhaps changing it to, “You must start at a trailhead/spot 11,000′ feet or lower” makes more sense. Or not. I haven’t collected the data of elevation points of all these trailheads to make a great opinion about the matter yet. 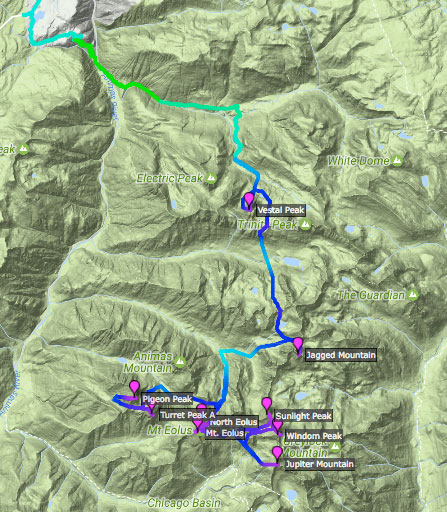 Then, down Cinnamon Pass to Silverton. A quick “rest” and it’s down to the Weminuche, which I’ve described a bit in detail on my last post, Taming the The Weminuche Throwdown.

It can’t be understated just how hard this section will be: 9 peaks (Vestal/Jagged/Pigeon/Turret/North Eolus/Eolus/Sunlight/Windom/Jupiter), 49+ miles, 33,000’+ elevation gain, over many days. This will be the longest, hardest, and most remote part of the whole tour in an already challenging range that’s itself only a chunk of the entire parcours. Onwards! 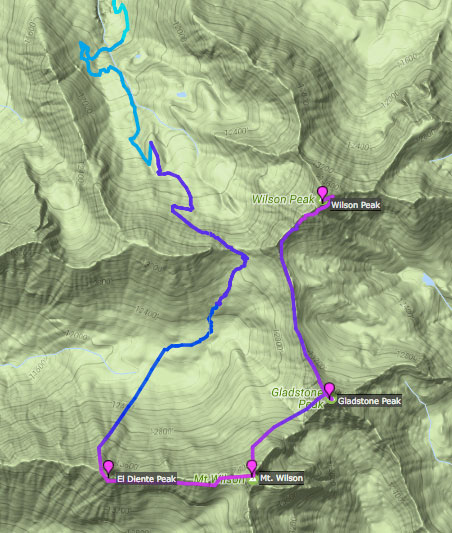 After a short reprieve in Silverton and a quick bop to Vermillion Peak right outside of town, it’s a nice ride to the Wilson Group via Ophir Pass. The Wilsons comprise four peaks, three 14ers (El Diente, Mt. Wilson, Wilson Peak) and a 13er (Gladstone). The rock is horribly loose, but with an early start, this group should go relatively easy, barring any monsoon storm.

From the Wilson Group, it’s time to ride into Telluride. Dallas Peak can be accessed right from town, then it’s a huge traverse over Imogene Pass (13,000’+) to access Teakettle and Sneffels. Dallas is only 2 miles from Sneffels, and although I would like to access the peak from the same trailhead, it doesn’t seem that that’s a reasonable option. 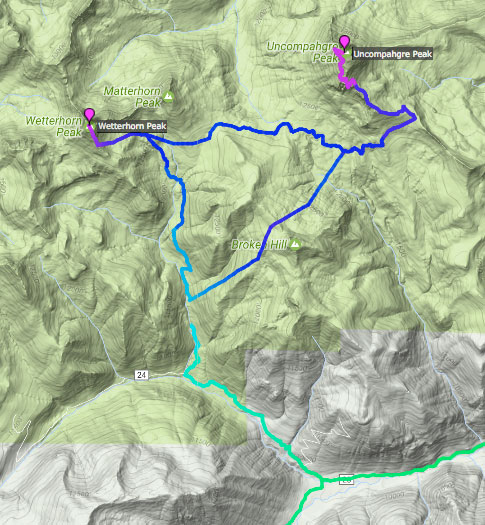 Once the preceding mountains are cleared, it’s time to visit Ouray, then back on the Alpine Loop towards Engineer Pass and to summit Wetterhorn/Uncompahgre. In my draft of the hiking route, I’ve made a shortcut back to the TH by going up and over Broken Hill. I haven’t scouted this, but it cuts down a few miles, while also only adding a few hundred feet of elevation gain. May be worth it. From the summit of Uncompahgre, the proposed shortcut does not look very inviting.

And if you can believe it, that finishes off the San Juan Centennials, back at Lake City, and now the adventurer is most likely completely disorientated from the circular route. To keep with the aggressive schedule of finishing the entire tour in less than 60 days, this section has to be completed in 15 – 18 days.