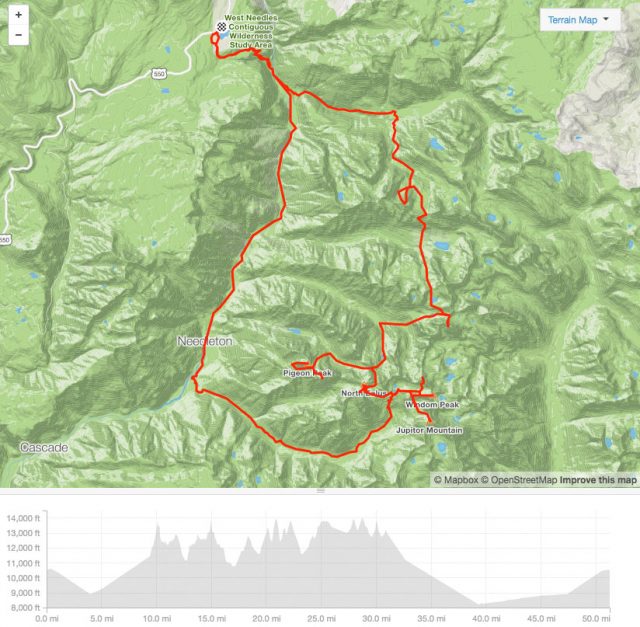 For me, the Weminuche Centennials will be the crux of the entire route, 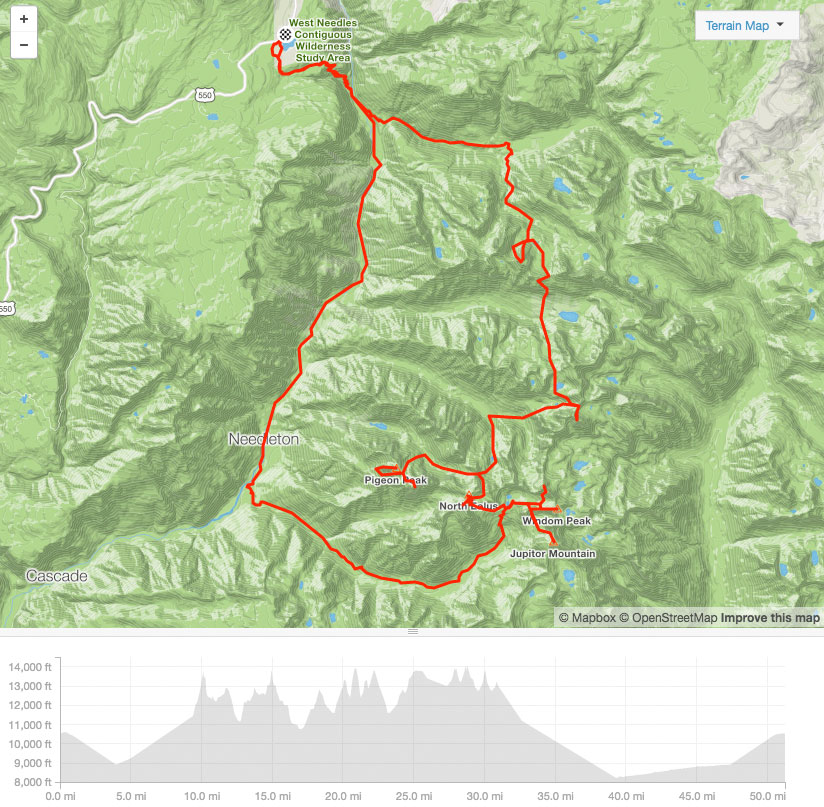 Starting at Highway 550 on top of Molas Pass, follow the Colorado Trail for a few miles east, before turning south into Elk Creek Drainage to climb the first of nine peaks, Vestal (via Wham Ridge). Then, onward south to Jagged Mountain, west to Pigeon/Turrent, then south again collecting the Chicago Basin 14ers and lone 13er: Jupiter. For peaks: you’re done. Now it’s just a hike back on much more easier ground, following the trail out of Chicago Basin to the Animas River, than North on the Animas to your starting point. From Chicago Basin, that alone is 18 miles of mostly relatively easy, flat hiking.

The majority of this route is off-trail, there’s some technical climbing, and no matter how you slice things, it’s going to be a multi-day effort. To fit into my goal of finishing the tour in less than 60 days, I’ll have to get through this entire section in five.

I’m not even sure how I’m going to be able to bring along that much food + sleep system in the UL gear I’m bringing (a Ultimate Direction PB Adventure Vest most likely).  I may have to opt for a UD Fastpack, instead, 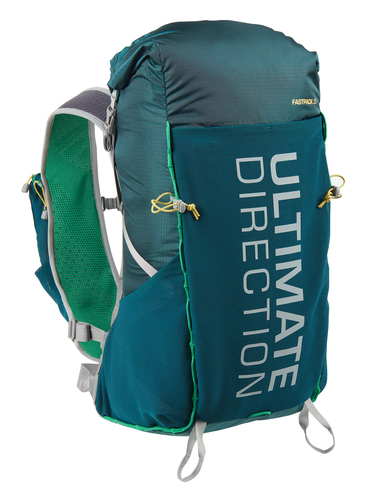 The more efficient the route, the less food I need to take, the faster I can hike through this all. To add to this, weather usually deteriorates in the afternoon, so even if I wanted to pull an all-nighter or two, that may not be possible, as I’ll be stuck up high in an electrical storm.

But wait, there’s actually an even bigger problem: once you’ve hiked out onto the Animas River, the hiking trail only goes a little ways farther to the Needleton stop of the D&S Railroad – then it’s all train tracks for almost 10 miles until you’re back at the Colorado Trail! That poses a huge problem since the railroad has right-of-way of the tracks and the land immediately surrounding it.  It would actually be trespassing on railroad property to hike the railroad tracks.

Since I’m going for an FKT of the challenge, this part of route (follow the train tracks!) doesn’t seem to me to be appropriate, as it would violate one of the major rules I’ve given myself: Don’t break the law, follow all backcountry rules and regulations.  This rule is put in place to keep the challenge open to all and sustainable for others to do – what’s the point of an FKT challenge if there’s a good chance to get caught breaking the law and fined?!

There’s tons of other, legal resources to leverage, I’ll have to work around the railroad’s right-of-way.

Playing around with building another route, one idea is to make this an out-in-back: 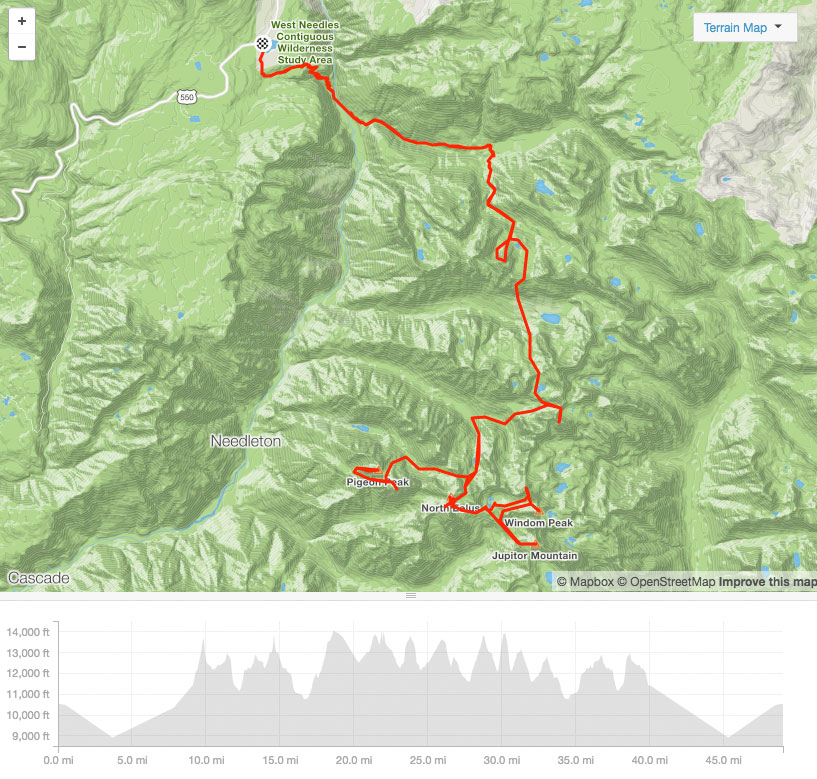 Surprisingly, this route may have some advantages:

Less mileage. Roughly, this route is actually ~3 miles shorter than walking out of the Chicago Basin west, then north following the Animas. Since there’s no trail on the Animas, you’re not actually trading trail for off-trail, but there is a considerable amount of elevation gain difference making this an out-in-back – around 5,000′ more. Yikes! That’s going to sting.

More flexibility. There are so many peaks to summit and so many unknowns in terms of weather, timing, how I’ll feel, etc. One of the bigger stresses I will have to deal with in general is needing to take on a peak tired, with deteriorating weather, not really feeling comfortable with doing something technical, miles away from the next human being.

If I get rest and wait it out, I may run out of food (because I’m bringing only what’s necessary), which will hurt me later on in this section. So the urge is to push things a bit. It’s a speed run.

With the original loop route, you only have one chance to go for it – you won’t see the mountain, again!

With the out and back, you do have some flexibility. Say, you hike into the CO Trail, and in a couple of miles, you’re in the middle of a hail storm? Let’s skip Wham Ridge and keep hiking on towards Jagged Mountain – maybe the weather will improve the next day? You could do this for the entire trip into Chicago Basin, if needed!

A day or two of rain showers isn’t ideal, but it may mean two days of avoided downtime if you play your cards right. You could also leave food caches to pick up on the way back – a few pounds off your back can make a big difference! You could even drop your main “pack” on the other side of Twin Thumbs and do the entire Chicago Basin unimpeded – that could save hours of lugging up and down gear.

So, even if hiking the train tracks is OK-ish, this may be the way to go. The only other major option would be to break this trip up into two trips: one just for Vestal/Wham Ridge, and one for everything else. You would approach Vestal via Molas Pass, and the rest from Purgatory TH. The hike in from Purgatory is not short, and the total mileage of breaking this up into two trips would be considerably greater.

Mapping Out The San Juans – Tour of the Highest Hundred

[…] Then, down Cinnamon Pass to Silverton. A quick “rest” and it’s down to the Weminuche, which I’ve described a bit in detail on my last post, Taming the The Weminuche Throwdown. […]