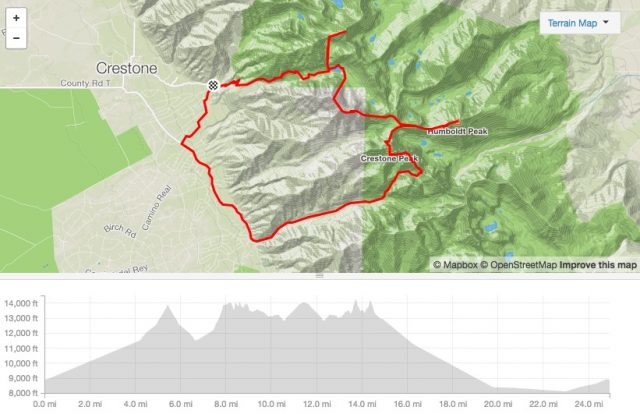 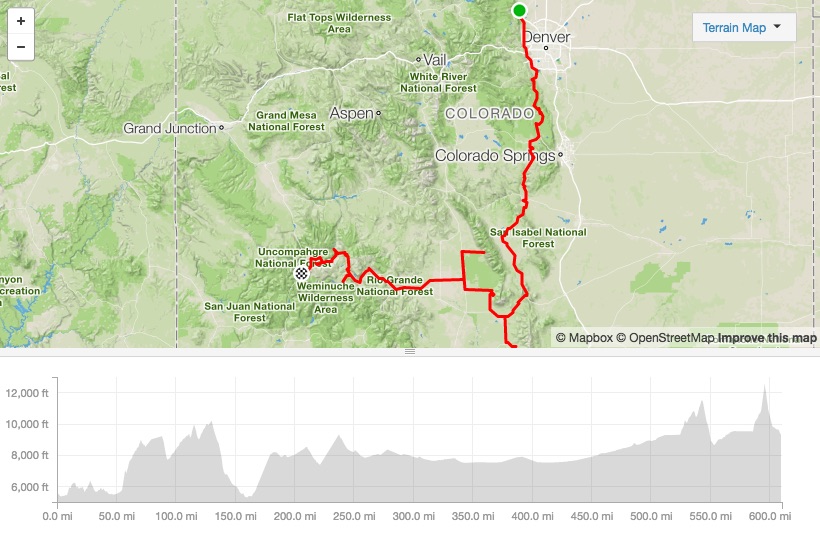 Route development is a huge part of this project, and optimizing the route to work well with getting to the trailheads of the peaks, for resupply,  to be an interesting route to ride, while also being safe to ride are all important considerations. I’ve started mapping out a logical route.

Some highlights (the entire route is subject to change, feedback welcome!):

I live in Boulder, so starting here makes logistical sense. For the 14er tour, I started in Golden at the footsteps of the American Mountaineering Center which I liked because of the tie-in with the trip itself being a mountaineering challenge. I’m going to move the start to Boulder on this trip to simplify things. I’ll be starting early – very early in the morning, and getting myself and my bike a ride to a different start other than the back door of my house can be a little touch-and-go. The finish is the same as the start in this challenge anyways, so one less issue to deal with at the end.

Once I start, it’s a straight shot south, with a quick stop for Pikes Peak before heading to Culebra/Red. A Culebra visit has to be reserved in advanced – well in advance, and that date has to be hit exactly.

In the 14er tour, I first visited Pikes, then the entire Crestone group, and then even Lindsey, before I planned to go to Culebra. This proved problematic, especially since the Crestone group is complicated – and the Centennials version even more so. The chances of failing at one or some of the peaks is a possibility and then, what do you do? Go back to the Crestones afterwards?

In the 14er tour, I gave myself a ton of extra time before Cuelbra – almost to much, and was hanging around for so long that I bought a ticket for a closer day to speed the trip up just a bit – an expensive optimization.

In this revision, I can gauge how long it will take to ride from Boulder, to Culebra, with a quick stop at Pikes pretty easily, and I don’t think weather would slow me down all that much.

The most convenient choice would be to start at Culebra, but who wants to end there? (Answer: not me).

Once Pikes + Culebra/Red is finished, the tour really begins. The next two mountain groups are in the literal meat of the whole adventure. 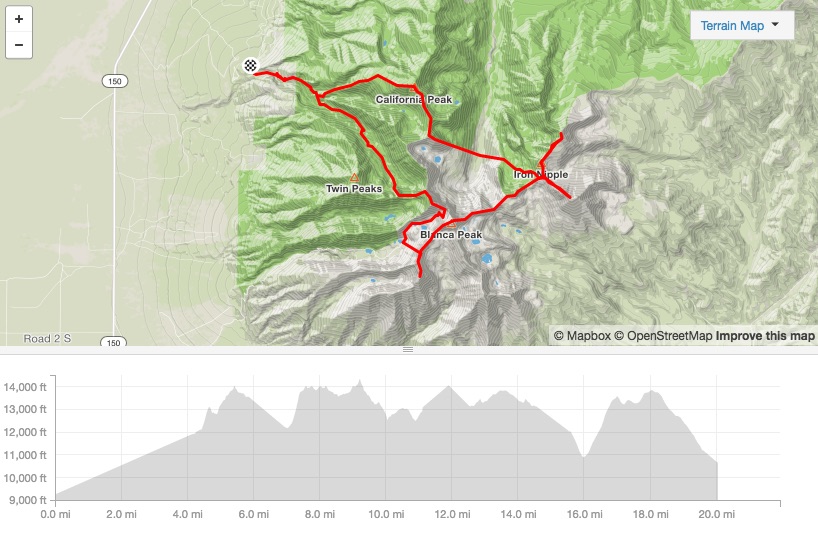 The Crestone Group is also no slouch, with an enormous route with seven peaks, and a few technical bits – all of which would be bad to bee in the middle of in adverse weather. 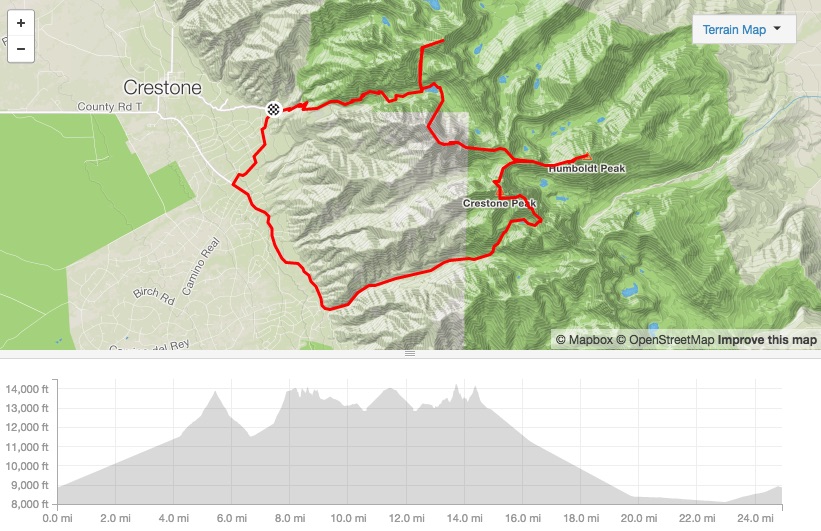 The bikepacking route from Culebra, to the Sierra Blanca and Crestone group is pretty boring – the only interesting bit that may have to be worked out is if I can go through Great Sand Dunes National Park. That may be able to cut some time/distance, rather going around. Seems like there’s plenty of resupply opportunities.

After the Crestones, it’s out west to the San Juans, resupply is readily available in Del Norte, Alpine, and Creede. It’s a long haul – over 100 miles, in not very interesting terrain, but what can you do? In the 14er Tour, I decided to approach Alpine via the Platoro and go north via the Great Divide Mountain Bike Route. A great route to take, but that was a huge time expense, and wouldn’t be very practical for this trip, being so north of Platoro after the Crestone Group. I was briefly considering tagging Mt Ouray – the most southern Centennial Sawatch, before heading to the San Juans via the GDMBR/Marshal Pass, but it’s just not working out mileage-wise to go up north, just to go back south.

Once in Creede, there’s one 14er, and two 13ers to hit up (San Luis, Stewart, “Phoenix”), then a huge ride to Lake City, broken up with visit to far-off Rio Grande Pyramid. Between Lake City and Silverton, there are a number of hills needed to hit up on the road up and over Cinnamon Pass:  Half Peak and Jones Peak, which essentially share the same trailhead, then Red Cloud/Sunshine, UN 13,832/UN 13,811 + Handies across the road. It’s a few miles to Silverton for R+R and BBQ.

Boulder to Silverton is a huge push – cycling alone is 610 miles, and 33,000′ of elevation gain. Twenty-six peaks in this project will be visited. To stay on target to finish the project in less than 60 days, Silverton will need to be reached around Day # 16. Being approximately a quarter of the whole adventure, it gives a rough estimate on how long the the entire ride will be:  132,000′ in elevation gain, in 2,440 miles. And again: this is just the cycling!