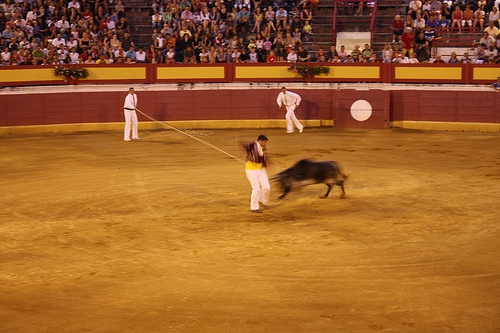 After getting off the internetcom’s yesterday, I found a campsite and made camp and picked up a flier for… bull games! Think a bull fight – but they don’t kill the poor thing. Most excellent, I thought, but the problem was, you get tickets at the tourist office, and they were probably about to close in a half hour. I thought to myself,
do I risk not getting a ticket, and taking a shower, or do I go back to town, and try to race for a ticket?

In the end, the shower beat out – I thought I’d risk it to see if there was, I dunno, a scalper, or someone trying to get rid of an extra ticket out side and if that didn’t work, just go to the movie (X Files – Blech)

So, I showered and felt very much the better, went to town, ate and people watched, until around 20:30 and headed to the stadium. And wouldn’t you know it, they had a box office. So a put down a few Euros and entered the bullfighting ring. And it seriously was, a bullfighting ring.

Not to know what to expect, the first thing that happened, was, of course a… marching band! Hazzah! And we know the love of marching bands here: 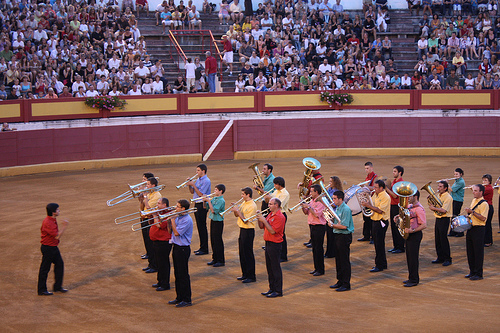 And then, they strolled out and sat themselves, to become some of the music for the rest of the games.

In bull games, the idea is not to harm the animal, but just to sort of, not get hit by it. The bull is put in one of the “corners” of the ring and then the guys in the middle sort of go, “HEY!” and the bull charges.

At the last moment, the guy the bull is charging at does a little turn and slaps the bull on the ass and that’s the trick. The matador-like guy looks all slick for not getting gouged and the bull feels a little astonished it didn’t hit anything. 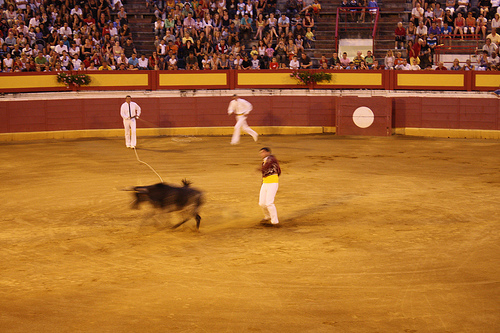 Not sure what your opinion of the ethics of this all are, but it does seem to be slightly humiliated for the bull, but less so, that it isn’t DEAD. They actually allow the bulls to live out their lives, to old age.

So, that’s the old-guard and it’s thing.

After they do their thing, the New Guy comes out, not wearing the fancy coat or anything – just white shirt/pants and a small tie.

He does the same type of setup, but instead of simply stepping away from the bull, he goes right over the charging bull, many times doing a flip in the process (and then tumbling again, once he lands). 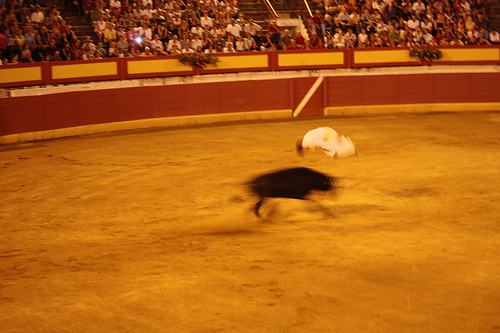 So that was Part 1 of the bull games.

After a brief intermission, they start putting out props into the ring. A few barrels, a string of flags, and… 4 chairs, a table and a sun umbrella?

Then, they ask for people from the audience to come down and people do! Manly men, here to test their virility. I wanted to come down and join, but being so tired and, well, there has to be a bull in the equation somewhere – and not knowing enough French to, literally, save my life, when the ring leader comes over and says, “OK, look, if you’re in trouble, do this…”, I feigned offering my hand.

Anyways, in a few minutes, they release, the bull! And then,

Then, they release a big giant bouncy ball.

And this is when I just sort of cracked,

WITH THE CHARING BULL! The charging bull is in the middle of all these men, playing football, with an over-sized ball. The barrels and flags were make-shift goals. There’s women sitting on the tables and chairs, just hoping not to get hit,

and of course in about 3 seconds the bull just plows through them, women going everywhere (mostly, after they get on their feet, in back of a defensive guard), the tables/chairs are reset and the women sit back down (just to be plowed through again immediately) 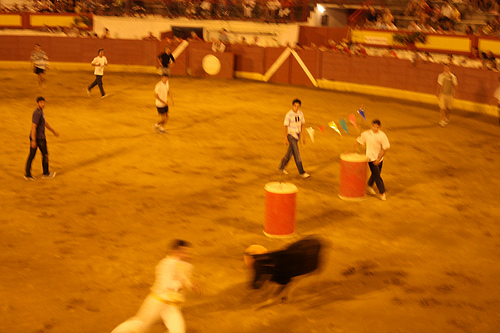 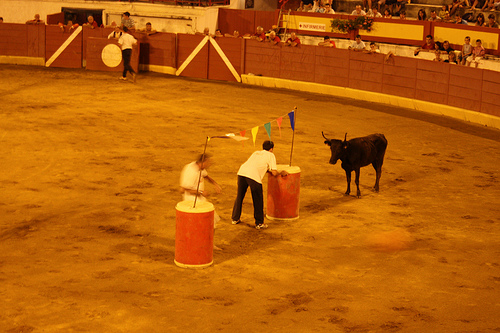 And someone actually scores a goal. The people playing? They’re good. You can tell they’ve been playing soccer… hmm… all their lives and probably bull-gaming (if they’re a local) most of that time as well.

So that happens, and it’s so unbelievable, since nothing like this would happen… I think? In the states. There’s the rodeo, of course, but they don’t just pick the clowns out of the audience, you know. 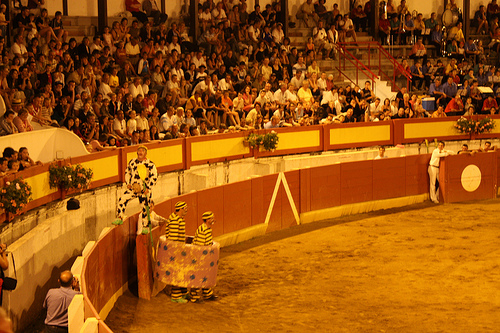 Your guess is as good as mine on what the “escaped convict” back story works in on all this, but the three clowns came out initially on a bicycling built for two. The most bizzare thing they did was decide to get in that violet tub thing, with one of them on top of another’s shoulders and take a huge, HUGE roman candle and kind of, parade around the bull ring, while the BULL IS CHARGING THEM. And of course, they get plowed. If there’s anything I like more than marching bands, it’s old-school clowns and now rodeo, bull game clowns have a special place in my heart.

So that was bull games. Basque is a weird place.

The next day, I got up bright and early and went to the surf shop in centre ville and rented a board and wetsuit. I got a long board – it’s not like I surf every day and hey, I like long boards.

Went to the beach. Overcast. That’s OK – because I like overcasts. I burn like, well, like a farm potatoes and distill whiskey for a living, so it’s a plus.

And there’s no surf to speak of. It’s so entirely low tide, the beach is a different place from yesterday.

That’s OK (Thinking positive – positive! Positive.) I can wait – hey, I can wait all day. So, I do. I take a walk, I take a snooze, I put on the iPod accessory.

And then, it started raining.

Uh… That’s OK! Just a passing shower. I’m sure of it. Sure beats being in the hot hot sun – huh, that’s for sure.

And, it keeps like that, I keep snoozing, and iPod-ing and reading my travel book and all that.

And you know what? It cleared up. The surf? High tide started coming in. Time to suit up.

I have the littlest of towels. And I tried using it to take off my knickers and put on the wetsuit. I flashed the entire beach multiple times, but the entire beach either didn’t care, or – well, they were all eating lunch, like smart people, so no one saw my great big… upper thigh muscles.

I go to zip up the big huge zipper that’s in the back there – it’s just like putting on a dress and I hear that sound – the sound that sounds
like a broke zipper. Cripes.

So, I flash the beach again my… my thighs that are going to get me up the Pyrenees (in like 3 days! YEAH!) and inspect the zipper. It’s broken. And you know. YOU KNOW, there’s no way to fix a broken zipper, when one size of the zipper is completely off the track.

Merde. I didn’t get the wetsuit because I was going to be cold – I got it, because I thought – well, less that’s going to burn underneath all this. So, thinking positively on all this, I thought – I could get burned and surf – pas de probleme.

Or, I could go to the surf school hut thing, about 50 meters away, and ask to rent a wetsuit from them.

And I do. At half the price of my other one. And, with conditions getting goooood, I go into the water and have a grand old time attempting to catch waves in fucking France. Which. Just the idea. I think I crossed something off my list – A third coastline “surfed” in my lonely 27 years. Yes.

The long board was a horrible choice though, as I’ve never seen a beach so difficult to paddle out. There’s no real way to duck dive with that big thing, so I had to wait forever for a magic lull in the wave activity and then, Jump! Paddle my little brains out and then, hopefully get through whatever late bloomers come may way. And I did. For hours and hours. So much fun.

Let it be known that surfing is hard. I am no expect, but I would jump at any chance at a month+ long journey to surf the world’s oceans with only the skills I currently have.

I gave the board back and got a refund on the broken wetsuit, without a problem. *Phew*.

Tonight – I don’t know what I’m going to do – perhaps see that dumb movie, but I’ll have to ask the trip’s accountant (my wallet) about that one. Tomorrow, it’s bright and early, bound for Basque Spain and a whole lot of unknowns. Awesome.