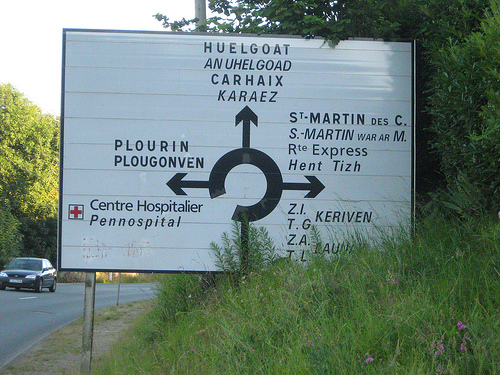 I’m in Sunny, partly cloudy Brest, who has great bike lanes and a lot of other stuff I have yet to explore.

Yesterday was quite trying for me I have to admit. The weather was bleak and the headwinds finally cracked me. I started riding with my iPod on – something I never do, even at home, but a Stereolab soundtrack helped, while getting lost in all these crazy French towns.

I finally found the town I wanted to camp at, and I was tired – Je suis fatigue. I found the municipal camping site, but couldn’t figure out how to… well, use it. There was a tiny office, but of course, no one was in. It was getting late, and I visited the three or so sites, but all seemed full. There was another site across the street from the first municipal camping site, but I didn’t know the story to that one – it looked like overflow or something. It was getting late and I was very tired and defeated, so I thought, “Hell with it” – I’ll go in here, and just have a snack and if no one says anything, I’ll set up camp, sleep, leave early and that’ll be the end of it.

So I do. I start by just eating some granola and yogaurt and this large man comes from one of the setups and says, hello, hello and I say, hello and all that,

and then, he offers me some Sangria. Well, of course! And we talk in broken French (me), until he calls someone who kinda knows English and that happens for a little while. And then, he goes away. I fall down, defeated again – and someone *else* comes by and tells me to come on over and there’s a HUGE table with a bunch of drunk French people laughing and being jovial and they put a drink in my hand and give me a seat for my ass and we all talk and try to communicate. The drink they give me is very strong and we all just joke at our lack of being able to communicate. I find it’s alright to camp there for the night (Yeah!), and then they start feeding me! Cous-cous and I think a chicken stew and another dish of Curry and sausage! Which was extremely nice of you – then they brought out the red wine and it was a nice little picnic.

Fed and drunk, I said bon nuit and woke up and explored the beach a little and came back – and they served me petit dejeuner! Which, was mostly really really good coffee. I found out the story: They were camping sauvage next to the *real* campsite, but got permission to do so for the entire summer. I guess it cost them 50 euros to do so – much cheaper than the real campsite, so they let me stay on their plot for free. And they fed me. Twice. And got me drunk. I thought that was exceptional of them. I was camera shy, so no pictures, but they took a few of me and my, petit ami whom we we all joking I would marry. When I get that, I’ll post it.

The writing underneith the French is… Gaellic? Lots of redheads and frecklefaces. It’s almost like an alternative Ireland out here. 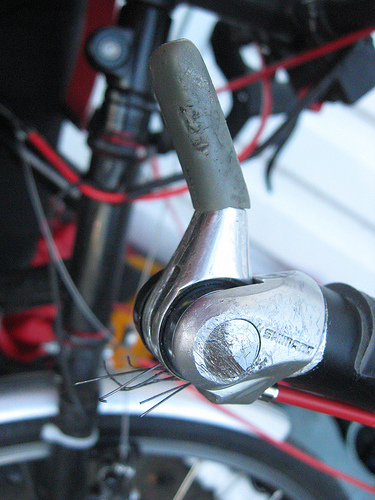 Those wires coming out that have started to poke my finger and make it bleed are actually from the red cable housing. I don’t know why this is happening. The left shifter cable is completely destroyed – I haven’t had more than 9 gears all tour. Haven’t yet found anyone to get that fixed, sadly, but 9 gears with my low front ring has been enough.

Yesterday, I had to stop around 19:00 and re-cable me rear derailer. The method to do so is usually: Find a supermarche to stop at. Buy icecream. Consume icecream. Do work you don’t want to. Go on your way. Voila. 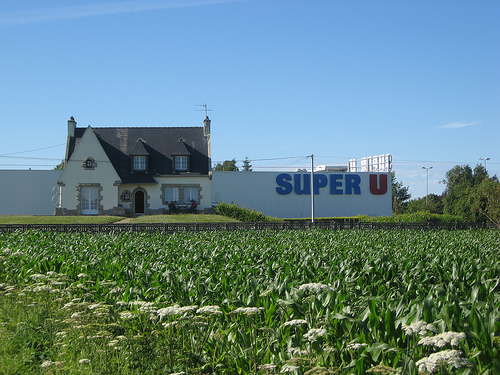 A good dyadic of old and new, I thought. 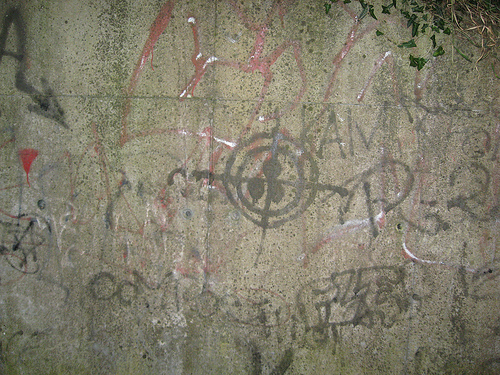 Some more graf. I stopped and snapped this, not knowing if it was a Gaelic sort of symbol (the three circles) – or a new Nazi one (the gun sight type thing) 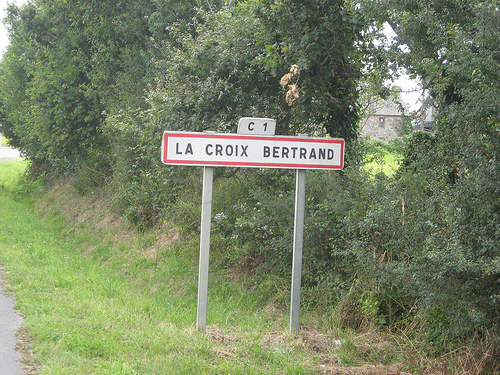 Just a town sign. “Bertrand” caught my eye – as in, “Plastic Bertrand” – another muscian I’ve used as a soundtrack for when I’m down.

And finally, an outside shot of Mount Saint Michel: 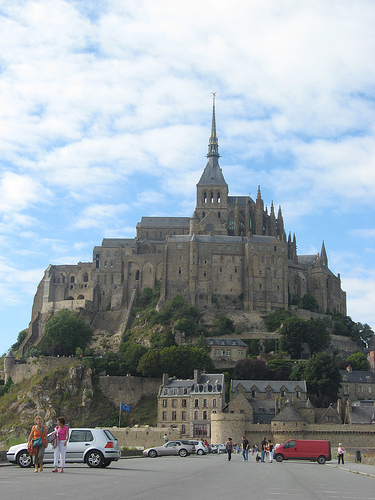 sounds like you picked an awesome spot to be exhausted. also, the symbol could be a hobo symbol? it looks close to some i’ve seen. but i could be totally wrong…((secretly i giggle everytime brest is mentioned as inside i’m a wildly immature 13 year old boy?))

you are. awesome. and very missed! Will you be back for bike prom?