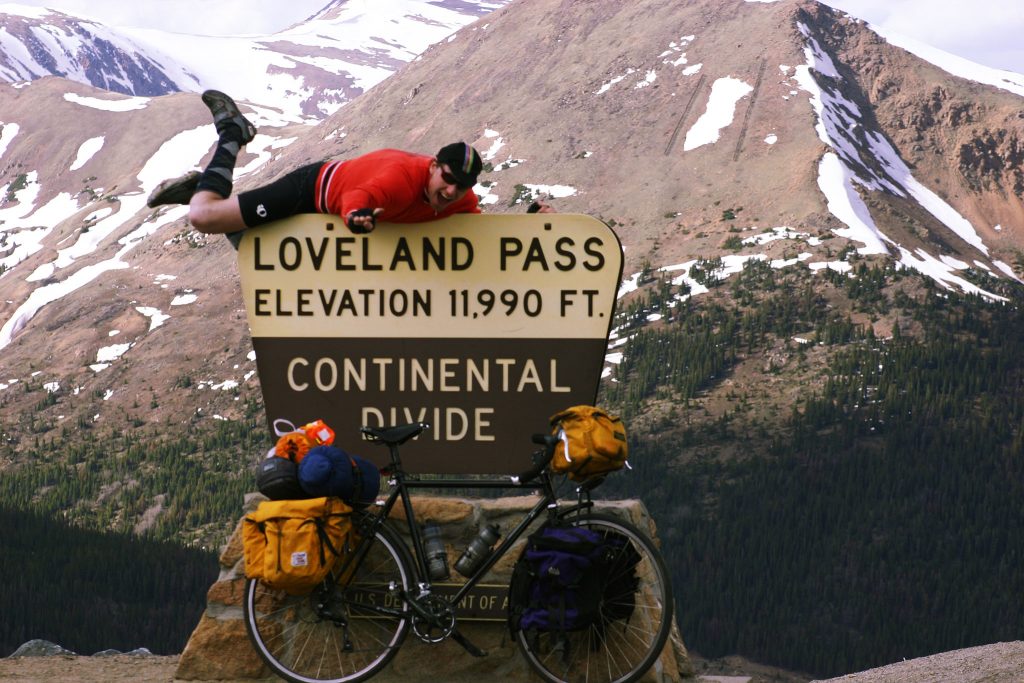 So I was waiting for my better camera to come in to shoot some nice shots of my bike, but the bike is currently in a big huge box and ready to take a flight with me to Vancouver this Saturday, so I thought I’d just show you some pictures of what I got right now.

If you’re wondering – I’m started my tour this Saturday – flying up to Vancouver and making my way down to Mexico along Highway 101 abouts – with some stops in the major cites (some not on the HW): Vancouver, Seattle, Portland, San Fransico, LA, San Diego and Tijuana. Plan is to camp out and take a day rest at the major places.

If you’d like to *host* me at any of the cities (or in between), I would be most grateful – especially in Portland, where I have no hookups whats so ever – and it looks like a cool town, too. I’d like to explore town a bit, so just a place to crash, a shower and maybe a floor to sleep on. I’m simple. I’ll extend an invite to anyone who happens to be in Denver. We have an awesome space. Just email me or somethin’.

Anyways, let me show you my boat…

This pic is from May – on the first ride of the bike. More about this ride later…

I’m a pretty simple guy. Not that I don’t like fancy things, but I like doing things well, which I then think looks good. Everything else is icing. I went out to build up a bike that was pretty simple and actually, *not* eye catching. During the winter, I kept my eye on what Craigs List had to offer and scoured the tables of the Veloswap for parts. So there she is.

A pretty conservative build: Nothing very flashy, but lots of stuff that should take a beating and not bleed. I wanted to make a hybrid of a touring bike and a cyclocross bike, since cross bikes seem to be my favorite style currently.

Here’s some of the touring equipment:

The back panniers and handlebar bag are older than I am. The front panniers are a little newer, but not by much – they’re all made by Boulder, CO area companies that aren’t around anymore, I don’t think. I bought them all for one low low price from a guy that just retired and realized he’d never use these panniers again. We were standing in his garage in Thorton, CO, which was filled to the gills with bikes and he was telling me about all his old tours and where these bags have gone. I thought I’d try these panniers out one more time and see if they can’t be used again.

The last thing the guy said to me, as I road back home from Thorton was, “Have a beautiful life”. Tears were welling in my eyes. I tell you.

So, I never wrote about my first ride – I’ll try right now:

It was the beginning of May. The weather reports said that it may rain – and I seemed to have ignored this. As well as ignoring the rest of the cyclists I saw whom grouped up and talked amongst themselves about if they were going to keep riding for the day, or if they were going to call it a day.

I went South from downtown Denver and went past Chatfield Reservoir to the Waterton Canyon/Stronita Springs Reservoir. Never been there before. The 2 lane highway I was on, turned into a dirt road, and that stopped, as I happened upon this:

Which was a HUGE dam! That was rad.

I kept going – there was a hiking trail that kept going straight, as the road turned into the dam itself. The hiking trail turned into singletrack which switchbacked up some pretty big and beautiful hills. I found myself at the top of one and with a little hiking, pushing the bike up – got a good view:

Kinda fun to not be able to see ANYTHING but mountains. Here’s a silly self portrait, putting the camera on a branch (not so successful)

I kept going on the hiking trail, first down the hill a bit and then back up some switchbacks. A few miles on pretty rough hiking trail is a bit much for this bike – they are only 28mm tires. I passed a guy on a full suspension bike and he told me I’d probably start to have some trouble coming up. And I did.

There were trees fallen all over the trail, and picking up the bike and putting it back down again become somewhat of a chore. After losing count of how many times this happened, I decided to just quit and head home.

And that’s when it started to rain.

And that’s when I got my first flat. It always happens: New bike – first ride: get a flat.

Changing the tire on a singletrack, out in NOWHERE, while it’s raining is interesting.

The rain continued and the singletrack turned into the main way water was flowing down the hill. My brakes squeeked all over the place and I Become colder and colder.

I didn’t really *bring* anything to wear on the trip – cept the fair weather jersey and PI cycling shorts. By the time I got back onto the dirt road, my hands were freezing and I couldn’t bend my elbows.

I knew a gas station in the Chatfield area – it was up another hill, but I needed to get out of the rain – the was starting to come down either freezing or in full-on hail, get some sort of clothes on, and get home. I was too proud to call for a ride – I was about 20 miles from home.

Riding up the hill on the paved road of town, my

So, I had to now push the bike, while walking. There was a grocery store next to the gas station that I never saw, so I went there instead. I didn’t bring a lock, so I stashed the bike behind the grocery carts and walked into the store, to find: food, something WARM to wear and, well, coffee.

I took my time – still shivering throughout. I realized I was pretty close to hypothermia – strange to think I could do that in May, but Colorado weather can surely change on a dime. I grabbed some coffee and looked for clothes – a hat, or a space blanket – SOMETHING.

I found: a bag containing 6 pairs of socks, and gardener’s gloves. I bought Snickers bar and headed to the bathroom, taking some plastic bags with me.

A good way to break in everything and make it feel less like it can’t get dirty.

I got warm enough that my hands sort of worked. I *did* bring a knife on my trip. I tore open the package of sock. I put on two pairs on my feet and then put on some plastic bags. I took some of the socks and tore them into tubes for leg warmers and arm warmers. I put a plastic bag on my head and called it good enough to get home.

It makes for one sexy beast:

My hands started working (seriously, it was to that point) well enough to work a chain tool. I brought some extra links and put together my chain and got out of the grocery store. It was, at this time, POURING cold rain. I started pedaling and a customer coming into the shop yelled out, “You’re going to catch your death!” and I sort of agreed and laughed. 20 miles to go.

20 miles of cold rain and being wet. The socks at least helped with keeping the wind off me and after a while, I just kept turning the pedals and singing Irish Drinking Songs. The bike paths I took home were, for the most part flooded, where the go under major roads. The paths follow a greenway, that’s on the side of The Mighty Platte River.

I forded some of them and miscalculated sometimes just how deep some of the flooding was – I found myself, on a few occasions with my *axles* underwater.

The busiest street I needed to get over – 6th, was unpassable by the bikepath, and the side I was on, was inaccessible to ANYTHING. It started to get dark. What to do…

I decided to just cross the freeway. Lots of lanes of traffic. One heavy bike. And TONS of guardrails to get over. Not fun. But, I made it.

I got home, feeling like a soggy bunch of 100 dollar bills in a freezing hand. I warmed up in the shower and took my gallery mates out for dollar tacos. Yeah!

All in all, a f-n great way to spend a weekend. The bike seemed fine after I gave it a once-over and since then, I’ve been testing it and myself – making some changes here and there. Some adventures since that time:

Here’s me on top of Bear Peak in Boulder, CO:

About a 60 mile round trip, plus a hike up that’s itself around 1800 feet. Exceptional view. That was last weekend.

If you dig that hat, check ’em out at: http://thehandsomesausage.com/ they are a local designer here in Denver.

Which is the Highest Paved Road in North America at around 14,200 feet, I believe. My time getting up was pitiful. Started from Home. That was a 100 mile+ with 9,000+ (a BIG +) gain in altitude. Gotta do it, if you’re in the area. Another shot from the tip top of the mountain:

Notice Very Angry Clouds. I seem to attract them. They were full of lightning and hail. Going *down* the mountain was an interesting feat.

I road to Breckenridge CO from home and back the next day. I had to do this pass:

Within 24 hours. That was interesting. Also interesting is that you have to get onto Interstate 70 a few times between Denver and Breckenridge. It’s a burly highway just to drive on. Some fun towns along the way, though.

Camped out at Estes Park for the night – again, starting from home – a good 85+ miles each way:

A lot of people ask what you do to get ready for a tour. Those are a few of the things that I did to get ready. I wanted to pack on some mileage, so I stopped going to the gym and just started taking long rides. On the weekend, I tried to make the rides as challenging as possible and fun for me, so I wouldn’t get burned out. Luckily, Colorado has some insane crazy things to ride to and on.

So, Sunday starts a ride that’ll take me 2,000 miles and through an entire country. Wish me luck!

Also! My sincere and deep thanks for everyone that helped out purchasing or spreading the word about the, “PUT THE FUN” t-shirts. It was a fantastic success and I’ve just about run out of them. I do have a few left and my gallery mate will be taking over orders while I’m gone. He lives even simpler than I do, and I’m splitting the profits with him, so he can continue to not have a Real Job and just ride a bike all day long and go to school for graphic design. Hazzah!