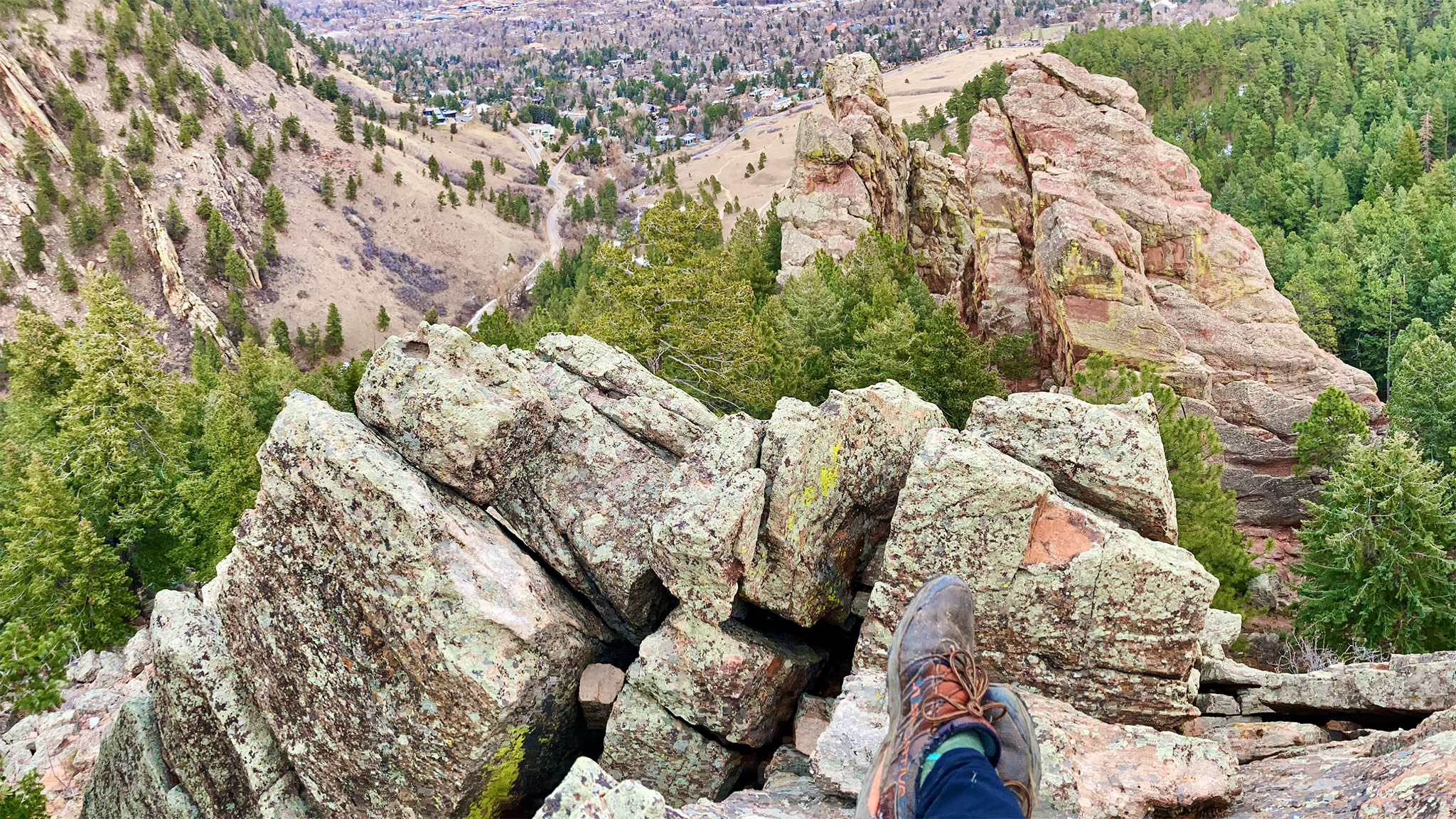 Alright sess. although I felt heavy – as if I was simply a big mass of muscle, rather than athletic. Tight hamstrings. Topped two new V6’s and a V5, so that’s a good session for me – all from the new set, and two of which I couldn’t even start last time.

Laying low to rest up the legs for punishment on Tuesday, so long as the current fire doesn’t devastate Open Space.

Ahhh – coming back from a few day’s rest!

Lap #1 had me going up Dodge Block again, this time with the Second Flatironette start. I forgot to dodge the giant tree that fell across the approach gully and whacked my head pretty good – d’oh!

Lap #2 had me going up Saddle Rock – this time I took a little spin up Standard Inside East Face of the Second Pinnacle – a silly little scramble. From there, I hopped across to the Third Pinnacle via (I guess?) Wide Crack, which I’m surprised to say I don’t think I’ve been on! Nice but short scramble.

I should have continued onto the Fourth Pinnacle (another formation I haven’t touched!), but there was somebody practicing what looked like Tai Chi, so I gave them a good berth so not to disturb them. I did then wander up to the Fifth Pinnacle via its south ridge route since that seemed pretty obvious to hit. There’s so much rock nestled between the Amphitheater and Saddle Rock and mucho obscure linkup potential – I need to build out an interesting line soon!

I bopped onto the trail for just a bit before wandering off and onto the slab you see rise right from the trail itself at the overlook, as I wanted to check out some boulders in that area. Found a nice overhang route – but the problem was that if you fell, you’d continue to fall right off the shelf the started on, then 20 feet further – so maybe not something to try alone (or at all).

I wandered a bit uphill looking at other boulders with no real promise, and found myself on a very mellow ridgeline, that led me up to the back of the First, and from there, I continued up to summit Green a second time.

Felt pretty good on the boulders, except that my right elbow started flaring up, which moved into my shoulder, so I decided to cut the session short and just do some reverse wrist curls for the potential tennis elbow, as well as general stretching for my hamstrings/hips.

I was hoping to maybe get out for a summit of Green, but the cold front was already moving in, and the temperature dropped literally dozens of degrees in less than an hour.

It reached down to about -18F so I thought it best to lay low, rest, and let me body repair.

Pretty cold out and the streets are somewhat a mess, so I stayed mostly inside again, venturing for a quick spin, then pizza. After the bike thing, I tried to stretch my hamstrings and hips again, working out a more consistent routine.

Temps. hit into the low 50s, which is always a surprise after such a cold front, so riding the ECR to the TH seemed very doable. That thing is a tank, which I think did more to keep my upright than the width of the tires. Forgot my lock at home, so d’oh! First lap just had me go up Saddle Rock Ridge, where I surprisingly met Sammy t’Dog, who seemed a bit lost. I found out they later found their caregiver so no mountain lion meal today. Second lap I went up Saddle Rock to start my hike up to the summit, then down Ranger. That’s been a while. Conditions were fairly strange. Didn’t really snow all that much on Green – only a few inches, and the snow that fell is incredibly dry. So much so, that the ground underneath is still also dry despite the warm temps, and the snow and dirt just mixed together in a very not-messy way.

Late start of the day. I knew this week was going to be a bit haphazard, so not stressin’.