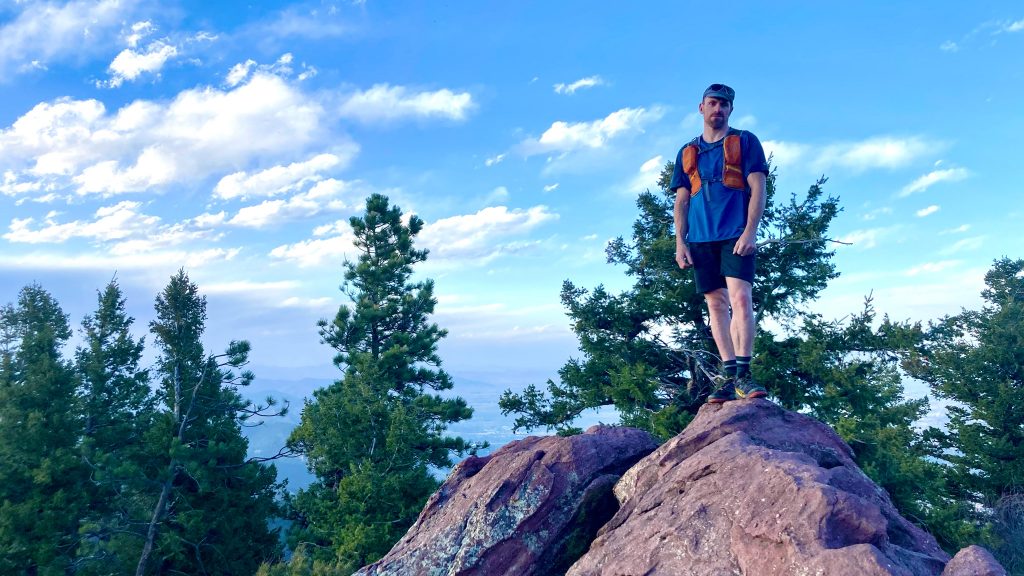 Missed a few weeks – too bad! They were good ones. Sometimes life prioritizes not keeping on top of this journal. Hopefully dear reader, you can understand.

I recently moved! But I snuck in a session before finishing up moving some more stuff. Got a really painful, crimpy V7 which I was happy about and then worked on another V8 (did a V8 a week or two back! Whoa!). Not super close, but there’s been good progress. The first difficult move is a… almost rose move to a good-enough crimp. Then the last difficult move is a traverse on a giant sloper (like size of your body, sloper), to another good-enough crimp. I had to stop, as I was losing too much skin on the sloper. Left right after someone tried to do the rose-ish move, and dislocated their shoulder. Yeaouch! May find that boulder changed the next session, or my beta may change.

Another cold day in Boulder w/a little bit of precip – just what we need.

Did a weight carry up and down Green Mountain. Not sure the weight, but some pretty stout rocks and at least 5liters of water, so: a bit. Decided to take the trails down, but keep the weight on me and try to ruck it down as much as possible.

Good eccentric workout – I’ll be feeling this tomorrow. Mostly Z1 the entire time down, which is a stark difference than going up. I usually suggest not doing weighted carries down – to me it comes to the danger of getting a sprained ankle while doing it, but I may change my view about this, if time isn’t tight.

Started a little unfocused on the 45 degree wall, feeling good warming up, but still couldn’t pick any problem I really wanted to session. Until that is, I got on this weird V6, that features some pretty powerful moves to a weird jug you need to match with your R hand and your R foot (via a heel hook) and then, somehow, grab the next hold out left that’s very, very far away. I am not one that excels at such problems, but I surprised myself (and it seems, everyone near me) by actually reaching the hold, and finishing the problem, starting from a few moves up. Whoa!

I’m not one to sell myself short (or I’m trying to not be that one…), but as a larger climber, with a lack of mobility, I wouldn’t bet on myself to finish this problem. As is the case for many breakthroughs like this, working the problem left me too tired to complete it, so I’ll have to wait for another day when I’m rested again to finish it all up.

I was right! Yesterday’s workout left me pretty sore – very obvious as to why: the eccentric weighted downhill work is tough on the body. Instead of taking an entire day off, I gave a good effort on the bike thing so as not to neglect my cardio.

Another weighted carry – why not? A little more weight added this time. Kept the weight on going down (again), but much harder to actually hop/run down. I’m going to feel this in the morning (again!)

I had one goal, and one goal only: to top that whacky V6.

I failed at that goal.

I don’t blame all that coffee I drank, but it didn’t help with the coordination of moves I needed to do. Ahh well. After I admitted defeat, I was working on wiring the beginning sequences, and ripped the mother of all flappers on my pinky finger, so my session was done, done.

Like before, I gave my tired legs a little break, and just spun for an hour.

Temps are getting up there! Tried to start a bit early, but kinda failed at that. Felt relatively strong on the climbs/descents, even though it’s been a tougher week without too much reprieve. Next week I’ll be taking a break, which I look very much forward to.

After coffee shop work hike to the summit kinda vibe. Legs were def. feeling it, especially on the downhill, c/o all those weighted carries. Happy though to have finished things up.

With Sunday’s casual summit, that makes 42 summits of Green Mountain for the year. On track it seems to push it to 100 by December 31st, but you know how life – and more interesting objectives get in the way.

Next week, I’ll be taking a much needed rest, then Drewbob and I are on our way to the Sawatch to do some Nolans 14 recon the only way I know how: to literally just to Nolans 14 (albeit slower). Until then,