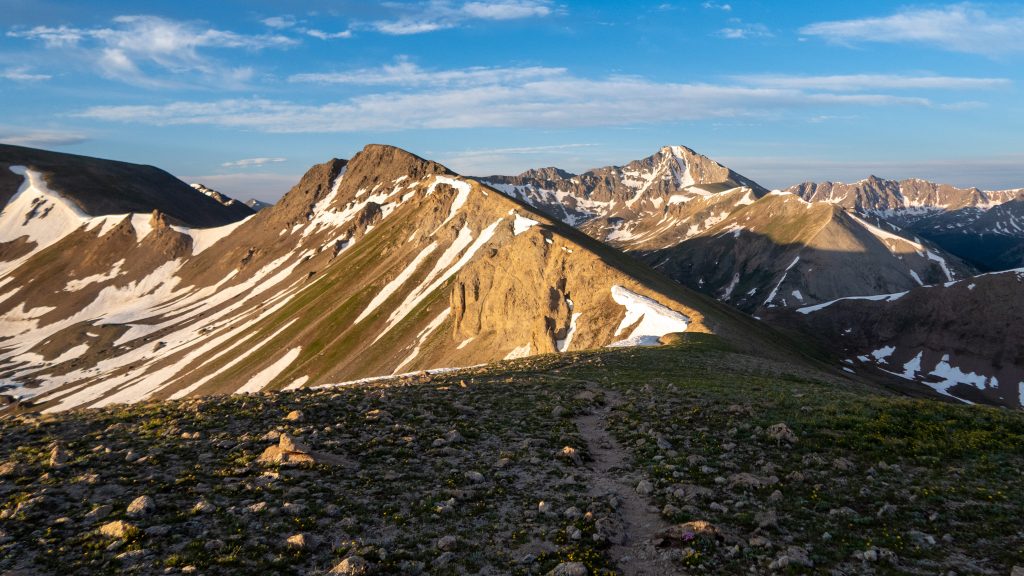 Big day out! Starting from Indy Pass, B. and I hiked to Red Mountain about 9 miles south to Red Mountain. The high point was Grizzly Peak A – a Centennial, which was nice to refresh my knowledge of. Good recon of the ridge – many parts just can’t be taken on directly, due to the loose, chossy nature of the rock, which is somewhat of a bummer. It makes me a little less stoked on taking on the whole ridge from Marshall to Tennessee, even though I invested so much time in getting ready to do so. No matter – always a good day in the hills. B. posted up a trip report here.

After Wednesday’s ridge hike, I camped at a switchback on the east side of Indy Pass amongst the boulders – a really nice spot. I had the foresight of putting up my tarp – something I try to avoid because of laziness. But I was glad I did, as it lightly rained this night, and I was happy to stay dry.

I brought a Sea to Summit rectangular tarp which has built-in guylines and holes to put my trekking poles in. It takes a minute to set up, but offers a fairly good shelter for your usual storm. Further experimentation finds that it’s best to use a shortened pole on one side.

The rain did delay my wakeup time from 2:00am to 5:00am, which moved the rest of my time tables for the day – but it didn’t really matter, as we shall soon see.

The start of the hike today was a little confusing as the road is hard to find, then goes underwater becoming a creek, before you need to cross the actually creek – which itself was so deep I had to take off my shoes/socks. Chilling!

The rest of the hike went well, and I have a better appreciation of Lackawanna. The lack of people en route was refreshing (although there’s lots of false summits!)

Weather was already disintegrating, so after a cup of coffee at Twin Lakes, I shoved off to Leadville. Decided to poke about for a back way, as I’ve taken that highway so many times, and just didn’t want to do it once more again.

Good climb out of Twin Lakes to the Mt. Elbert Forebay through the campsites, then onto CR 24, then CR10, around a gold mine, until right where it almost comes to the highway at the bridge. From there, there’s a bit of public thru-way through private property to get onto 130/130a, following the Mt. Elbert Conduit – literally a pipeline connecting Turquoise Lake to the Forebay. Just crazy – but the whole system of taking water from the western side of the Divide to the eastern side to feed our thirsty mouths is off the scales – and something us Front Range folks just don’t even think about.

I milled about Leadville a bit, but the weather was just getting worse, the hostel was booked tight, and the pizza had all been eaten too quickly. I decided it best to not have to deal with bivvying in Leadville – or at least it sounded better dealing with a bivvy near Frisco instead. Rain, instead of snow?

I timed my departure perfectly – the rain starting in earnest just as I got out of the city limits. Freemont Pass was the scene of a downpour. With tired legs, it was a little grueling, but nothing I haven’t done before – which really does remove a lot of the drama from a ride like this. Yes, it’ll take a little while, yes I’ll be cold – but eh: it’s all kind of a fantasy type thing, and if I needed to ditch somewhere or get a motel room at the end, or flag a car, I could without much problem or danger – thick calluses and all. It was about ten years ago I first did such a run and then it did feel quite a bit more adventurous.

Once in Frisco, I bee-lined it to a gas station I knew had a place to sit and got some tea to try to warm myself up. That worked, and I was on my way. Bivvied behind the hospital off a trail in a flat-enough spot, putting the tarp up again. Stayed dry enough this night, although the 2:00am wakeup call from the departing Flight for Life helicopter was somewhat surprising.

Not very focused – worked on a V7 I’ll get next time, nothing else much to report.

Yesterday’s weather looked pretty bad, but today’s wasn’t any better. I wandered out, thinking I could dodge a storm, but it started in earnest just as I started up – rain, hail: the whole show. Pretty cold on the way up as I was soaked, but the storm mostly stopped just as I summited – as long as I kept moving, I’d be able to keep moving and slowly I could feel my extremities again. Good thing I love going up and down hills!