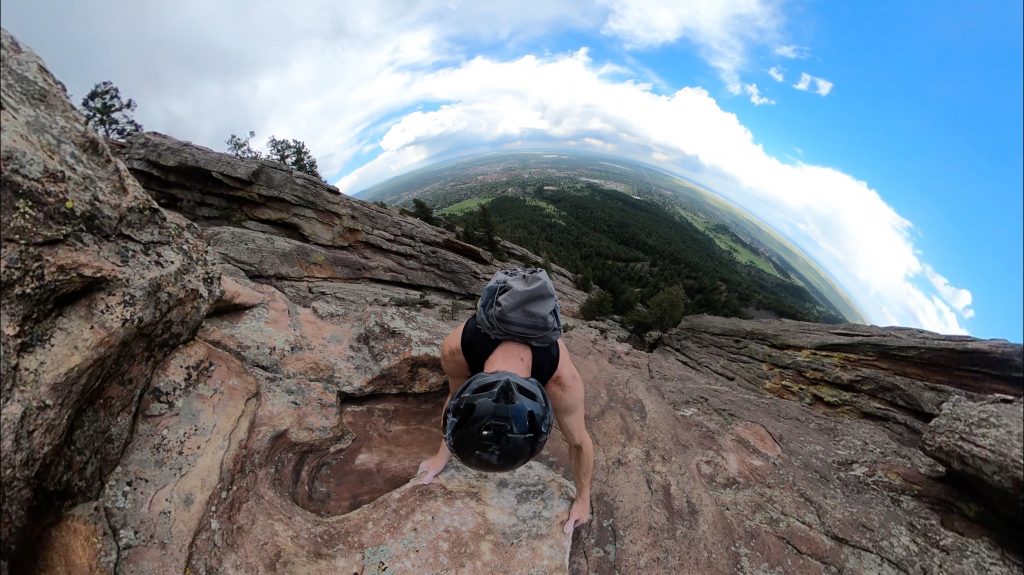 Got the V5! (much rejoicing). Must of felt good and was that .1% stronger. Warmed up by doing all the crimpy V5/V6 problems in the gym. Finished the day with ~4 V6s – all I’ve done before. There’s a few V6’s at the gym I just can’t even start – it’s kind of maddening (but fairly usual). Guess it’s, “If it can be crimped, it can be climbed” for me!

I think I had more to write, but long story short: climbing is hard. I weighed in at 184lbs, which is around what I normally weigh. Whoever says cardio kills yer gains certainly hasn’t met this big slab of hunka hunka burnin’ love.

In my unending (seemingly) need to Leave No Line Undone, I spied a flatironette just a few feet from the TH I had not paid attention to before, so I went to investigate. It wasn’t much, but it made a fun diversion walking around it, and pointed me towards the back of the Amphitheater. Crossed over to the South Amphitheater Pinnacle – a formation of choss like none other in the OSMP.

I played on a South Ridge route (good views), before taking the easy, Class 3 ridge that goes to Gregory Pass – this ridge is very much like one you’d find on a higher 14er. Even though it’s sandstone, it has the look and feel of shattered uh… gneiss? – like you’d find in say: the Tenmile range. Good place to take someone to get them used to ridge runnin’.

Then, the steep hike up the back of the First, the NE ridge, the summit. From there, I dropped my water, and ran down.

New set on the overhanging wall. Hard. Much thrashing.

Free For All Laps + Green

A really great day, although it seemed I was going to get skunked out by rain. And in fact, it was raining lightly at the Greg. TH when I started. Still, I decided to make my way to the Second to do Free For All anyways – I brought the GoPro to film some footage and I’ve already been rained out trying to get footage already, so why not press my luck?

I wandered up to the base of the Spy as the sprinkling continued. I thought I could outrun the worst of the angry cloud circling around me, so I suited up to film this – it’s such a short route, so I felt confident I could get that done. And I did!

But now it really was threatening to unleash a thunderboom storm on me, so I got into a good rhythm that this will turn into a hike/run, rather than more scrambling. Half way up hiking on the back of the First, someone called down from around the top of the flatiron itself – they were trying to climb off it from its extremely overhanging north face – a face where there’s no documented routes.

With a little parlaying, I realized he was stuck. I directed him that the easiest way off was to get to the summit, where I’d meet him, and guide him down the downclimb. It was full-on raining at that point, and lightning was threatening, but we both got down safely – no big deal.

Afterwards, I scampered to the start of Freeway, which was mobbed by a slow party of 5, so I relocated to the start of Dodge Block which I knew would be more lonely, and set up for recording Free For All. Scramble went well – it’s so funny how a little practice to reacquaint oneself can make something go so much easier. Finished the scramble, and headed up to tag Green in a nice refreshing rain.

I had some time to kill, so I decided to just do Free For All again, ’cause it’s just so much fun – the route seemed dry enough after the small storm had passed . After that, I packed it up. It never really rained to hard and the air was kept cool.

Worked on a V6 on the overhanging wall, almost exclusively. Not much luck linking anything together. It’s a hard, steep angle for me, for sure! My legs are full of muscles that gravity loves to pull on. But I was pretty bored at the rest of the problems in the gym and sometimes you just have to throw yourself at something beyond your limits.

A really lovely day wandering around. I’ll try to describe my route, but even I’m confused – just a big wandering knot.

Started up Gregory Ridge, a Class 3-ish ridge of a chossy layer – more akin to a hogback than the Fountain Formation found on Flatirons (holy alliterations) – much easier without a pack of 20lbs! Moved onto The Spy – and scrambled that and then hiked to the summit of Green after that, rather than taking the obvious path of the First/NE Arete – I didn’t want to deal with the weekend crowds on the route – plus I had a lot to do today! And needed to keep moving.

Down Green and to the start of Freeway because what the heck. Surprisingly no one on it, so I did a quick lap without really focusing on the route – it’s all memory after the few hundred times I’ve done it.

Tagged Green again, and went down Ranger until it junctions with Greenman and took that back up, then down the Amphitheater trail – I felt I cheated on the elevation of Lap #2 on Green, as I didn’t make it all the way down to a TH/Mesa Trail, so made up for it, kinda, here.

Lap #3 was up towards the Greg. waterfall, then up the Saddle Rock ridge, and continuing onto the NE Ridge of Green to tag. Not very exciting, I know.

The descent though – took the West Ridge trail for a hot second to a ridge down towards Long Canyon – perhaps one I haven’t wandered on before? Worked fine to getting to the creek (erm: Long Canyon Creek?). I spied yet another small ridge that went up towards Ranger again, so why the heck not? More vert! Wandered into a beautiful open field – some of the flattest terrain I’ve ever seen on Green Mountain! And that was just quite lovely.

Once I bumped into Ranger, I took that down until it hits into Greenman (again), but got off it soon to visit the old homestead trail, took that down until it ended back on Gregory Canyon trail for a hot second, then took a full-on deer trail out into the Gregory Creek drainage (which hmm: would make this the real Gregory Canyon?) There’s some really cool giant pieces of I guess pink granite? found in the area (looking it up, it may be, “Boulder Creek Granodiorite”). It’s very out of place in the sandstone – although Saddle Rock is a grey granite itself. But this stuff is salmon pink – beautiful stuff.

Wrapped around the now bear trail (don’t ask me how I know), to the Saddle Rock ridge, then down to yet another game trail down to the smaller waterfall, and down to Amphitheater.

All these wanderings on Green have been fun, but also a little sad. The amount of trash I pick up on the reg. is a little surprising. But much of that trash has been laying around for a while. Today, I picked up two Jones Soda cans (Creme Soda) from 2011.

I was planning a full rest day today, but the weather was way too good to waste inside, so off to the OSMP I went. I was also pretty tired from the past week of wandering, so it was going to be a kind of a quick day. Brought my approach shoes, just in case.

Wandered up to Gregory Ridge – and remembered I wanted to summit the South Amphitheater Pinnacle. I had stopped short of the summit a few days ago. Found that there wasn’t much else to do to get to the actual summit, but nice to just tick that off. It’s really not the worst little climb in the world, but the rock quality leads something to be desired. I couldn’t figure out the location of the north ridge route – it doesn’t feel very obvious from the top.

Finished up Gregory Ridge, then went down to link the First Flatironette/Spy/NE Arete of the First. The First gets pretty hammered with parties on an amazing Sunday like this, but I thought I could weave my way around any parties on the final ridge crest. It was a little funny spying on a lost party below me with the guidebook out, trying to figure out where their route was, as I was making my way onto the First myself (I didn’t know what route they were on, either!). Ridge was indeed choked with parties, but I know practically one or two variations for each ridge crest, so I successfully stayed out of the way of roped parties. Super fun!

A quick lap of the Sunset Flatironette, then down again to the base of the Second, where the usual Sunday yard sale was happening. Someone was actually setting up a top rope that went up halfway the first pitch, which I thought was pretty ballsy given it’s a Sunday – and this might be the most popular scrambling route in the entire State. It takes me a few seconds to scramble that distance, so no big deal for me, but it may be a little more tenuous for fair-weather parties.

A quick lap of Free For All, and I was done with my scrambling. Grabbed some gear left behind from the summit used for a rappel anchor – I’d leave it be, but it was really a questionable setup. I wondered if the party actually set things up to be retrievable from the bottom, afterwards (like in canyoneering)? That would be double-sketch. I say this as the slings were easily unslung from the piece of rock they were on. There’s better places to set up a good rap. anchor.

Tag of Green, then down.

That made my week a little shy of 20,000′ of climbing, and 38 miles – which you know: that’s some steep. Six summits of Green, which is a good progression (five last week, four the week before, etc). There may be something in this “progress slowly” and, “be consistent” – but I guess we’ll have to see how this all pays off on my trip in a few weeks (whenever enough snow melts off my ridge).

A quick stop at the gym – mostly because I really, truly want Monday to be a rest day. Felt pretty tired, so I just played on a new set on the dead vertical wall. Alright problems. Ticked a V6 easily, but I think it may have been a little half-baked. Fun problem though, for sure.