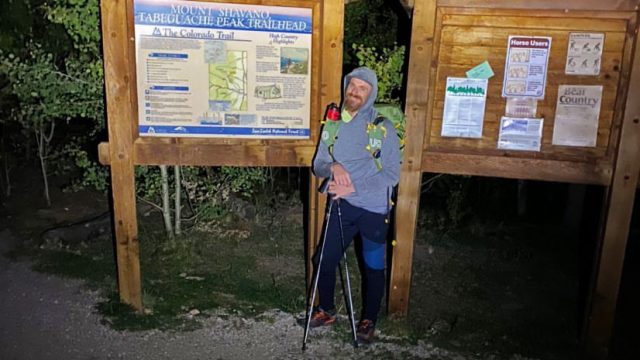 Nutrition is a difficult subject for me to broach, as I don’t feel as if I’m an expert on the subject to give advice to others. But, I can share the strategies that I personally take when doing my projects, and invite you to use it as a model for your own experiments. What I cover in this article is for unsupported, take no prisoners, as fast you can fastpacks on difficult mountainous terrain. Pack space is at a premium and the total weight is something you try to keep at a minimum. This will not be advice for an ultralight backpacking trip, which is a different beast altogether. No stopping to prepare a meal, no stove.

I recently attempted an unsupported Nolans 14 fastpack with a little bit of a twist. Rather than beginning at the southern terminus at the Blanks Cabin TH, then summiting 14 14ers in a row, and finally finishing at the northern terminus at the Fish Hatchery outside of Leadville, I also was planning to continue on and summit Mountain of the Holy Cross, ending my fastpack at the Half Moon TH. And from there, pick up my bike which would be dropped off at this TH, and ride right back to the Blanks Cabin. I gave myself around 3 days to finish the main Nolans line (I was planning to finish under 60 hours, but if I didn’t, I’d still continue to Holy Cross), and an extra day to get to Holy Cross and Half Moon TH, then yet another day to get back to Salida. So, five days in total for the trip.

To start off, I’m a 5’11” man that weighs between 175 – 185lbs, depending on the time of the year. As ultra-endurance athletes go, I’m a big, muscular guy, and my base caloric needs are going to be somewhat high. When doing a fastpack trip where I plan to be moving between 20 and 24 hours each day on difficult mountainous terrain, carrying everything I’ll need for multiple days in a row, in potentially freezing conditions, and at altitude, I do plan that I will be burning through a ton of calories. For me, based on past experience, a multi-day effort like this works well when I bring between 3,500 – 4,500 calories each day.

There’s a little extra padding of calories in there, in case I’m out for longer than I’ve estimated and need to ration my food for an extra day, or a type of food I bring just isn’t agreeing with me and I need to abandon trying to eat it (at least for that day). This works out to be around 2.6lbs of high-density food/per day.

The second thing I attempt to do is pack food that hits many, if not all the different types of flavors:

Making sure I pack different food that hits many/all these flavors keeps variety in my menu and also make sure I don’t overdo it on one type of flavor, which may lead me to getting sick of eating it. I don’t want that – I want to keep eating throughout the day and night.

Packing nothing but Sour Patch Kids (sour + sweet) doesn’t even sound appealing in theory. But having a baggie of sour patch kids to supplement a bag of mixed nuts (salty + savory), as well as other choices sounds fantastic. Bitter foods are a little more difficult to pack on a fastpack trip like this, but I do love my coffee, and I do love crystallized ginger, so there are some easy examples for you.

The stomach especially and the body as a whole does funny things during such trips, and you may find yourself absolutely obsessed with a type of flavor, For example, you may just absolutely need something salty. Or, you’ll lose your appetite for another type of flavor – maybe for you that will be sweet things. Having options to switch from during the day will make sure you’re always getting calories in.

The final concept I look at are macros:

The higher the intensity and the shorter the trip, the more I’ll lean on getting most of my calories from simple carbohydrates. Say I’m doing a half-day trip – that trip could be done all carbs. I can eat a better balanced meal before or after I’m done, but my stomach is just not going to be able to digest anything too complex when going full gas.

For a multi-day fastpack, the intensity is going to be lower, so I’ll be able to take in more complex carbs, as well as a good variety of fats and proteins. This helps with keeping the menu a little more interesting. I’ll still base a lot of my calories on simple carbs, as they are very convenient, but I don’t feel the need to only eat them. I’ll add in a good amount of fat and protein to keep my body happy and my meals a bit more balanced. I don’t actually go overboard with planning out macros – the chances that I’ll go into a major protein deficiency after a few days in the hills because I didn’t bring enough nuts and protein bars is terrifically low. I do try to eat well before the trip though: balanced meals, lots of veggies: you get the idea.

So that’s the simplified theory. For your own trip, experiment yourself with food you’d like to bring on much shorter trips to see how it works with your stomach and holistically.

So here’s what I brought for Nolans:

I brought ~1,500 calories of Tailwind for each day, which is a huge dent in my 3,500 – 4,500 calorie bucket. Tailwind is mostly dextrose and sucrose (simple sugars) with some electrolytes, so in terms of flavor it’s sweet and salty. Tailwind is super easy to utilize while on the go: just add it to the water you’re drinking! With each sip, you’re guaranteeing that you’re taking in calories. No fat nor protein, so make sure to get those from other foods you bring.

You know: trail mix. I brought a mix of walnuts, cashews, almonds, and added some crystallized ginger. This was my main savory selection, with a little bit of saltiness added to the nuts, as well sweetness and bitterness from the ginger. Ginger is also touted to help ease an upset stomach, which happens on these types of trips. It couldn’t hurt.

A bag came to ~1100 calories. These nuts were the most difficult food to digest, being mostly protein and fat, so I saved them for easy parts of the route that I’d be on a trail for a while, and could take the time to put a handful in my mouth and thoroughly chew (very important: chew your food!).

Another classic, and easy-to-find indulgence. A bag of peanut M&M’s came to around 1,200 calories, mostly from simple sugar. There’s a little bit of fat from the peanuts and chocolate, but this isn’t a balanced food, although it tastes so good. No trip is ruined because one takes too much chocolate.

I took three Cliff Builders “protein” bars. I write “protein” in quotes, as these bars are actually fairly balanced when it comes to macros. Along with the 20 grams of protein they pack, they also bring along 11 grams of fat, and 29 grams of carbs (mostly simple). That much protein (and a little bit of chocolate) makes anything bitter, but that bitterness certainly is cut with how much sugar is in these things. In total, these came to ~870 calories.

And that’s literally all I took for each day. In total, it tips the scale past 4,500 calories, and weighed around 2.68 lbs for a day’s ration. Again this is definitely food-as-fuel, rather than a backpacking menu. Now there’s certainly a lot of freedom on what you can bring if you’re to design your own nutrition menu, and no two trips of mine have ever had the same lineup. I’ll continue to experiment myself.

For example, Tailwind is a new addition for me, as I didn’t want to bring along so much straight up candy. But bringing nuts is a tried and true choice and it’s hard to find a more calorically dense food. If you want an example of a different menu selection, see the food I brought for my Sangre de Cristo Range Ridge Traverse:

Other than the coffee/5 hour energy (I keep caffeine supplements separate from my food now), you’re still looking at 5 different bags of food. Instead of Tailwind, I used Hammer Nutrition Perpeteum (which is mostly maltodextrin). I think both products are fine, but Perpeteum can leave water bottles a bit more dirty after you’ve run out of liquid, and require a good rinse out to get that flavor out – not really as big of a problem with Tailwind. When planning my Nolans menu, I decided that jerky just was too tough to digest well at the pace I was trying to keep, and opted for protein bars instead. For whatever reason, I just wasn’t feeling jerky, after sampling some that I had just bought from the store.

As you can see, all the food is packed separately in Ziplock bags and then I put all the food for the day in a larger Ziplock bag. I’ll store these bags deep inside my pack, and take one out at the start of each day and put the smaller bags of food in easy-to-reach places outside of the main compartment of my pack. Whatever I’m doing, I can usually grab some food without having to take off the pack itself, and I certainly don’t need to open up the main compartment of the pack. These little details save a ton of time over days of a trip.

One Response to “Nutrition for a Nolans 14 (and beyond) Fastpack”