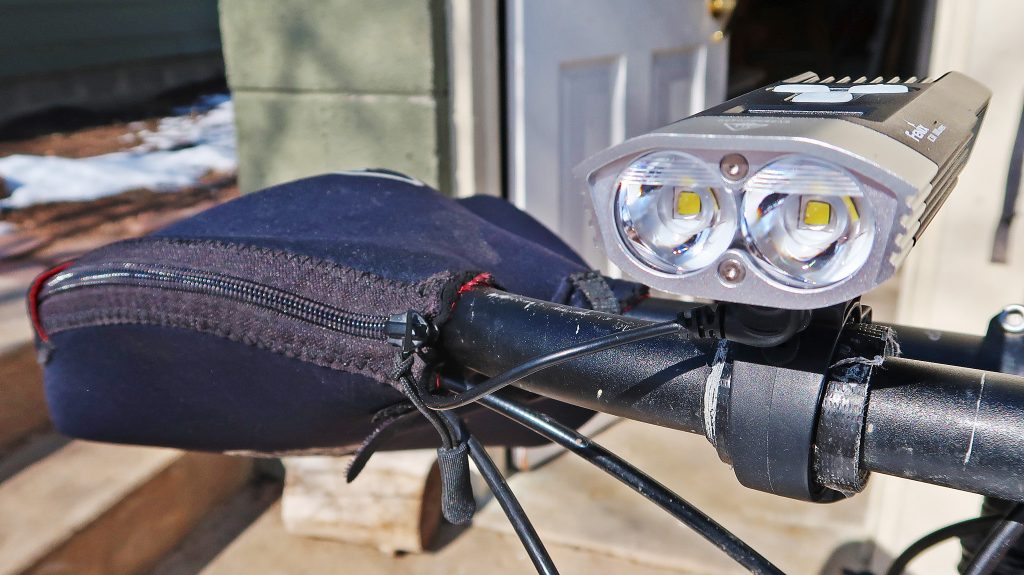 A few weeks ago, I returned to my bike from a grocery store to see that someone had stolen my beloved Magicshine Monteer 1400. A great light – and a great run for the light. Usually such accessories don’t last so long with me due to harsh use, rather than theft.

I was pretty sure I knew exactly who had stolen the light, as there was just one other person outside of the store at this hour, who conspicuously had about three other bike lights adorning their own bicycle – and all of different makes/models. This person was also eating a pint of ice cream at night, in the middle of January, with a five inch blade in lieu of a spoon… so even though I rode slowly by them to assess the situation, I decided it best to just leave this particular type of crazy alone. My fault for trusting the world at large with such a tempting item to swipe easily from my bike.

So I’ve been shopping around for a new light. I could have just bought another Monteer 1400 (or another Magicshine model) from Magicshine, but I had the opportunity to pick up a Fenix light at a good price, so I looked at what they were offering.

I have bought a few Fenix lights in the past and used one for my Tour 14er, before moving to a dynamo hub for my Tour of the Highest Hundred. All of the Fenix lights I’ve had in the past had broken on me. These Fenix models I’ve bought and used all had an external battery pack with a cable running to the light itself, and it’s that part of the light that fails. Coupled with that, the handlebar mounting system on the Fenix lights really left much to be desired. But, the Fenix BC30R model seemed to solve both of these issues. First, no external battery pack! And an improved handlebar mount!

In fact, the Fenix BC30R shared many positive attributes that I enjoyed when moving on to the Magicshine Monteer 1400, like charging via a micro USB cord. The only feature the Fenix really lacked was the ability to remove the internal 18650 batteries. But to be honest, I used this feature of the Magicshine light rarely. What’s more, I was able to damage the light’s fragile circuitry located on the rear panel within hours of ownership (it’s a gift I have) and going over large bumps sometimes disconnected one, or both of the battery’s circuits, leaving me literally in the dark while rolling through rough terrain.

The Magicshine Monteer 1400 is a great light, but no light is perfect.

So, with my purchase finalized, the Fenix BC30R recently came in the mail. Below are my initial impressions on the light – I’ll be using it most every day in the coming months, and maybe I’ll circle back to write my thoughts of extended use.

Fenix does a really great job with presentation of their lights in the packaging it comes with. The cardboard box is attractive enough to utilize for storing the light when not in use, as well as help with reselling the light, if you decided to do so.

Inside the box itself, the light in all of its accessories are nicely stored in foam pockets.

Included with the kit:

Charging is done by plugging a micro USB cord into the USB port on the bottom of the light.

It’s not clear if this light has true pass through charging support, allowing you to both run the light while also charging the light, but you can have an external power source plugged in, as well as run the light in its lowest, Eco setting. The Fenix marketing material says that this is an OK thing to do as well, but not something they recommend.

This port is also used to plug in the remote buttons, which you can then attach to your handlebar near your brake/shifter lever.

There’s two buttons, one that turns on/off the light itself (press and hold), as well as goes through the various lighting intensities: while on, press to go through each intensity.

The other button allows you to access the light’s max 1800 lumen setting. The light only supports being in this mode very briefly – a few seconds at a time. Although marketed as an 1800 lumen light, it really should be called a 1000 lumen light. It’s not clear if the 1800 lumen setting just drains the battery hyper-fast, or if it’s the high temperature the light gets to at this setting that’s unsustainable. The Fenix BC30R does have circuitry to lower the brightness of the light, if it gets too hot for the brightness setting it’s on as well.

This remote button is particularly useful if one is using Pogies, like my Barmitts. In this setup, it’s not easy or preferential to remove your hands from the confines of the toasty Barmitts, so having the remote buttons right by my brake lever and shifter is quite a nice thing, indeed.

When the light is turned on, the display on the small screen will show the approximate runtime of each brightness level selected.

Knowing this runtime is extremely useful, as it can help make sure you can run the light as bright as you can, while also making sure you’ll have enough runtime to make it home/to camp/whatever.

I have no idea how this light is able to calculate this runtime, and I haven’t used the light long enough to know how accurate it is. From my understanding, lithium batteries don’t discharged linearly. As they are used, voltage that put out put out creeps down slowly, before dive bombing down to very low voltages, effectively exhausting the battery itself.

The table below is what Fenix published for each runtime, as well as what the light reported its own runtime was after I charged the light overnight and then turned it on:

In each instance, the reported runtime is less – sometimes much less, than the published run time, even when the light’s battery is fully charged. I haven’t done any real world tests though, so I don’t know how accurate reported runtime is. You’ll also notice that as the level goes up, and more lumens are put out, the additional distance light is thrown diminishes.

The Fenix BT30R is not a small nor featherweight light – this should be quite self-evident. Compared to the NiteIze Radiant 750 light, it’s approximately 2x the size and weight:

For sure, two different classes of lights. Interestingly, NiteIze markets their light with 750 lumen power and being able to handle this output for 2hrs 20min. The Fenix BC30R light has a High setting of 1000 lumens, which is advertised to run for 2hrs 40 mins. Hmm! I haven’t stringently tested either of these runtimes, but it doesn’t make sense that two lights, one with twice the power capacity would so closely match in light strength and runtime.

Doing the most rough of tests – sitting in a darkened room and turning each light on to, “high” in succession (750 lumen vs 100 lumen), as well as comparing each in the lowest setting (75 lumen vs 50 lumen), it’s pretty clear to me that both the high and low setting for the Fenix BC30R is much brighter than the NiteIze light.

I was pretty worried that the handlebar mount system would as terrible as the previous Fenix light models I had, which were simply a thick rubber band that you tie around the handlebar. This is completely inadequate.

I was happy to find that the including handlebar mount for the BC30R was completely a different beast, with what seems to be a beefy design that bit into my handlebars and kept the light solidly in one place. We’ll see if it stands up to the rigors of daily riding.

Updates from the Fenix BT30R

I actually own the Fenix BT30R, which the Fenix BC30R seems to be the successor of.

The BT30R featured an external battery pack, which needed its own accessory to charge. This was terribly awkward, as the pack itself needed to be removed from the bike any time you wanted to charge the batteries. The battery pack’s connector inevitably cracked, and mine is held together with some electrical tape. But the big problem I kept having was the cable end leading into the light itself, which over time essentially snapped, leaving the light inoperable.

Thankfully, the BC30R fixes all these issues by not having an external battery pack, but rather packing the batteries in the same container as the lights themselves, removing the need for all these cables.

The BC30R also seems to have a much improved mounting system and good thing too, as moving the batteries into the light itself means the mounting system requires a better support anyways.

Funnily enough, the older BT30R is marketed as having a “High” setting of 1200 lumens/1hr 50min runtime vs. the newer BC30R’s “High” setting of 1000 lumens/2hr 40 min runtime, even though battery capacity between the two lights is the same, and from a cursory look, the LED’s are also most likely the same. Perhaps Fenix tweaked the settings in the name of longer runtime?

Who knows what the actual lumens are that are being thrown from these lights – I’m not feeling as if there are standardized tests in-company between different models or across different companies and their offerings. Stated lumens should be used to give a ballpark idea on the brightness of these lights.

I really can’t suggest anyone in buying the older Fenix BT30R, except at a deeply discounted price, as the cable routing and inevitable damage from normal use will shorten the lifespan of the light. If you do own the older BT30R, moving up to the BC30R is a righteous upgrade.

I had the chance to use the BC30R on my usual small after-work ride, and was pretty happy with things. The light thrown out is easy on the eyes, being fairly diffused, and each brightness level seemed different enough from the last to be useful.

I don’t necessarily prefer a bright, focused beam in front of me, which is good as this light floods what’s in front of you fairly well. On dark backroads, I can stick to one of the lower settings; on downhills or in heavily-trafficked areas, I can bump up the brightness to match the conditions or feel a little safer in traffic. No big surprises – this light seems solid.

More time testing the light with a critical eye will need to be done to make a final opinion, though. I also don’t want to make a comment on runtimes, as the cold temperatures of my nighttime February rides could have an impact on battery performance.