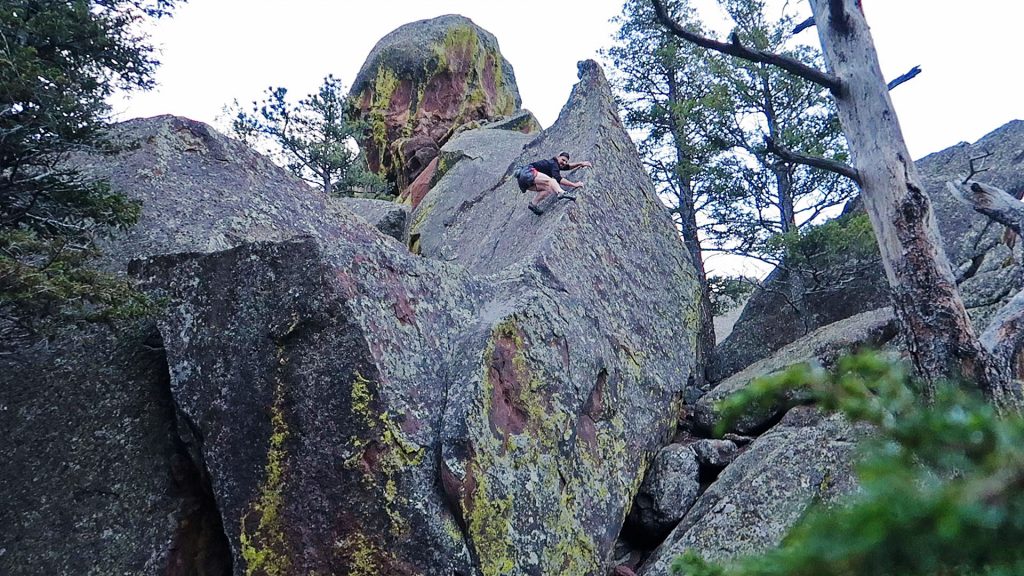 Knew I was going to be tired from yesterday’s run, so didn’t have too much in mind goal-wise, except: be there, be present, do the thing.

A route I’ve been meaning to try for a while. I guess my definition of a “Mountaineers Route” is one where some technical climbing is done, and perhaps doing so in a logical, aesthetic way.

For Boulder’s OSMP, that means linking flatirons – and there’s many ways to skin that cat to maximize your time on rock, while also making good progress towards the summit of Green Mountain.

Today’s version was to link up Regency/Royal Arch/Fifth/Hippo Head, which are in close enough proximity and alignment to each other, that you could imagine being on a more more distant locale than 5 miles from my house, taking in more rarefied air than the Front Range Urban Corridor offers.

At the trailhead, I realized I had neglected to, uh: actually bring along my scrambling shoes (La Sportiva TX2‘s), which are the clutch gear for the entire linkup!

Annoyed at myself, I wagered I could do most of the east face routes in my La Sportiva Mutant‘s, and anything more trickier, I could use my Miuras, which, for some reason: I did remember to bring along/forget to take out of my bag. What lazy luck! Where is my mind?

The scrambles went well – not too much to report. In fact, I was a bit ho-hum bored with my selection. I had been off of the red conglomerate for a little while as Second Winter decided to roll back in, and didn’t know how comfortable I’d be up on the slabs. But now, feeling good, I wanted to spice things up. I wandered around looking for boulders – both old and new, to top.

The first one I found, after finishing off the Fifth was Scar Girl –

Scar Girl is about as perfect of a hand crack boulder that the Flatirons will give up, but I’ve never seen anyone else do it, except the few people that I’ve specifically brought up to give it a look.

This was my own first time trying the boulder with rock shoes, and the additional of these made bomber foot jams possible. This boulder features a perfect top out. So good.

Scar Girl wanders pretty close to the South Ridge route of Hippo Head, so that was my next objective. This route also features an interesting hand crack at its last pitch, so I kept the rock shoes on this climb, not knowing what type of terrain I’d find on the rest of it. Weather looked like it would be turning for the worst, so I made slow haste up, then down the more trickier west face (Thin! Reachy!). Happy with the bump of commitment of the day, I wandered to a nearby boulder that caught my eye last Sunday.

It’s most intriguing feature was its diminutive, albeit sharp summit – a spire but in miniature! I just had to climb it. The south face of the boulder had a crack of middling utility. The north face looked much more committing. I started with the south face and found a very enjoyable, easy route:

But the north side beckoned. The very bottom of the boulder had perfect starting hand holds, a fun few moves to the start of the ridge, a great mantle up to the final dash to the money: taking the arête to the top!

Almost a mini route in of itself!

Not finished with the boulder yet, I noticed that there was a doable squeeze between two boulders, so thought I’d take shot to see if it went. It did!

It was getting late – I’d started over 3 hours ago, so I left my newest favorite boulder I have since dubbed, “Baby Giraffe”, and went along the ridge towards Green’s summit.

But, another boulder I’ve eyed for a while attracted me to it. This one sports a thin finger crack. I’ve half-heartedly tried this boulder before, but without being able to foot jam, there’s not much else in the way of alternatives. With rock shoes, it was very doable and even a bit exiting, given the size of the boulder and the fact that I was far from anybody:

Wrapping things up, I tagged the summit of Green (finally!) and trotted back down, happy with the outing.

Another good session, where I climbed the plastic things. Hectic day, so I entered the gym at around 6 or so, knowing the the gym may be packed. Thankfully, it wasn’t.

Calm before the storm…

A nice long ride around the local ‘hood. My general designs parameters of such convoluted rides are:

So with a reasonably early start, I dashed up Lee Hill to Deer Trail Road (steep!) – the backside of which has an Emergency Escape Route – the first of many I’d take on this ride. These rough, two-tracks link disparate hamlets of houses together so that if something like a fire/flood happens, the residents aren’t cut off from the rest of the world. Most of the time, they just make a great resource to find the quieter way around self-powered.

Once down the steep switchbacks of the EER, I flew down CR 83, and further down Sunshine Canyon, looking for Poorman, which I’m somewhat embarrassed to say I’ve never taken.

Poorman links Sunshine with Fourmile Canyon, saving me from having to ride back through town and its traffic. Once on Fourmile, I then climbed back up and took a left on Logan Mill Road. Logan is another road that goes nowhere in particular. To keep with the theme, its summit is accessed by a labeled Emergency Escape Route of its own, which I obediently followed, trying to escape my own tangled up stress from the week.

When planning this ride, I had spotted a new-to-me trail off an even smaller road found near the summit of Logan Mill Road that I wanted to check out and see if it actually exists. Turned out to be a public singletrack through private land – another Emergency Escape Route! This out-of-the-way route allowed me to skip all but a few hundred feet of pavement on Sugarloaf, and soon I was on the one mile long road to access the southern-most part of the Switzerland Trail. Swiss is an old railroad bed for a tourist line. Now, it’s popular with the 4WD enthusiast crowds.

I wandered a bit on the side tracks, somewhat since I’ve never done that before, but found little of interest except “dispersed” car camping sites of unusual size (CCSOUS?!).

Getting my fill of Switzerland, I exited onto the Peak to Peak highway, and turned north to take the road up to Rainbow Lakes. I’ve never been all the way up the road to the campground and wanted to see if I could punch through any lingering snowdrifts. Punch through I did, and was greeted by a small moose wandering the more swampy parts of the camp’s environs,

The campsite itself wasn’t yet open, so I had the place to myself to explore and take awkward selfies,

And good-looking bike shots next to mountains,

Done with exploring the campsite, I was looking forward to an easy, downhill to Nederland on Caribou, but Caribou had different plans. The entire track from Rainbow Lakes to the 4WD gate was chocked full of snowdrifts – some over ten feet high! Caribou Creek itself was running high, making for some exciting crossings,

I had some deja-vu of my 2011 Tour Divide, pushing my bike through the snow, but finally got to the end of the 4WD section and onto the more maintained part of the Caribou dirt road.

I suffered only walking straight into one cut tree branch, but I must have done something stupid with my bike, as I noticed my back tire going flat, just as I finally hit a mean downhill (and relief). Weather was turning for the worst, so I really didn’t feel like making a repair out on the road, as I was so close to town (and a full-sized floor pump to borrow from a bike shop!). So I did my best to ride to Ned at ~5psi for coffee and repair chores.

After mending the bike, topping off water, and downing a double macchiato, I was out the door, to climb up once again west to the border of Designated Wilderness . This time, up to Fourth of July Trailhead, to see how the snow levels were looking on South Arapahoe. Along the way, I met my second, – much larger, moose of the day:

muching on some fresh vegetation, right off the road to Eldora. The road to Fourth of July was nicely plowed – a treat, even in June, but the campsite itself was buried in snow, and won’t be open for a while. The mountains were beautiful though, even from the road – and even in my hastily shot photo,

With the last major objective finished in my ride, I turned my big-rig back towards home, taking Magnolia to 68J to Flagstaff to Chapman – one of my personal favorites.

Once at the bottom of Boulder Canyon (and feeling the weight of the day), I could have just taken the creek path home (easy bail), or I could have taken Four Mile Canyon up to Poorman, and reversed my first leg of the route (as I had sketched out the day before), but I thought: might as well throw caution to the wind, and ride up Betasso!

Betasso is a pretty flowy trail system, but I was on mile 85 for the day, with more than 12,000′ of elevation gain in the legs. I certainly got through Betasso, but didn’t make it through with great style. Betasso Link was an absolute horrowshow I mostly walked, and even Betasso proper had some features I was just too tired to negotiate cleanly – on one relatively benign albeit dry/gravely/slightly off-camber turn in the trail, I managed to lose all traction on my front wheel, and initiate a low-speed, slow-motion crash that found my handlebars firmly lodged between my legs. That kept me down for a hot minute, and made me wonder if continuing on my way was going to happen.

After a brief pause to collect myself, I made it out of Betasso and back onto Fourmile Canyon before dark. I was out of water and food, and again the easiest thing to do would be to rocket straight downhill on Fourmile and down Boulder Canyon, but thought best to keep it going on Fourmile, back up Poorman, up Sunshine, up CO 83, and back up the Emergency Escape Route. In my head, that seemed like quite a chunk of track, but I just quieted my mind, and took it piece by piece. I was a little surprised I was able to clean the final steep switchbacks of the Escape Route, and find myself on top of Deer Trail Road, with an enormous descent to enjoy.

Back home, I barely was able to shovel some cereal into my mouth, before I passed out onto the couch. A good day’s ride!