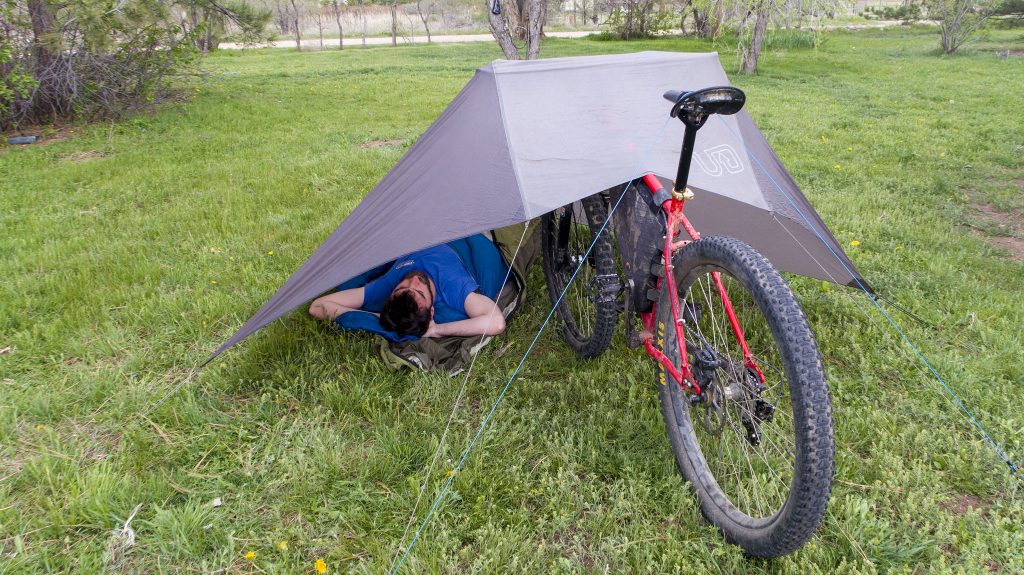 The Ultimate Direction FK Tarp is a lightweight tarp system that was designed initially for fast-and-light fastpacking/ultralight backpacking missions in the backcountry. Two trekking poles are usually used to prop up the tarp – either UD’s own FK Trekking Poles, or whatever you prefer. Six lightweight stakes (included) are used to tie down the tarp. The FK Tarp can fit one person and all their gear quite comfortably or two people in a pinch.

I’ve myself used the FK Tarp w/trekking poles for my two month Tour of the Highest Hundred on smaller trips, and while backpack guiding and found it met or exceeded all my wants/needs/desires for a shelter. It keeps me protected from all manner of wind, rain and even snow. For trips like the Highest Hundred, I usually bring my Black Diamond Ergo Cork trekking poles with me since I was also doing some major fastpacking adventures on course, like the Weminuche Throwdown.

But, if I didn’t need trekking poles, I’d have a hard time justifying the weight/bulk just so I could put up my tarp. That makes having a tarp that doesn’t work well with bikepacking somewhat of a liability to me – am I supposed to have two separate tarp systems, depending on activity?!

The Ultimate Direction Bike/Tarp Conversion Kit allows you to forgo using trekking poles to put up the FK Tarp, utilizing the bike you’re already riding, instead!

The kit is comprised of three different pieces:

The first is a bag you can use to stow the other two pieces while you’re riding. It can double as a seat cover when you’re camping. A simple drawstring cinches it tight.

The second piece is a long piece of double-sided velcro the wraps around your saddle. Attached to the velcro are two guy-lines used to stake down the bike itself, so there’s no chance it’ll tip over in the middle of the night.

The last piece is a piece of foam that allows you to attach the pockets on the FK Tarp that usually accept your trekking poles. The foam then rests on your bike’s handlebars, creating the platform that provides the ceiling to your tarp.

I was pleasantly surprised that setup using the bike/tarp conversion kit was actually easier than using trekking poles.

First, attach the strip of velcro over your bike’s saddle, and stake down the attached guy lines.

Place the tarp over your bike, aligning the foam piece with your handlebars.

Stake down the front of the tarp, then the sides, and then the back guy lines. For the back, I tied them to the same stakes that I used for the guy lines that are attached to my saddle. Pretty easy!

During the early phases of this product, I sat on and consulted with the Ultimate Direction design team who then came up with the bike/tarp conversion kit. I had my reserves that this system would work well – or at all. My first worry was, will the tarp flop down, the bike smooshing me while I slept?

Thankfully, it won’t. Alone, the guy lines staked to the ground will keep your bike upright without any additional support. Once you have four more stakes in the system, there’s just nothing that will tips this thing over. I tested this theory by violently shaking the bike, then kicking the bike itself, trying to make the whole house of cards peel over. No luck!

I’m pretty confident that you could, in theory, remove those two guy lines that are attached to the saddle, and the whole system almost be as stable as they are with them. I was also surprised that the bike, with these guylines makes setup a lot easier than using trekking poles, which, in comparison, are particularly unruly to set up without a buddy.

I was also concerned with how much room would be available to the bikepacker, using the bike en lieu of trekking poles. Would it be a tight squeeze trying to sleep next to a wheel?

Thankfully, that didn’t seem to be much of a case, either. The apex of the tarp’s ceiling (the edges, at least) are actually now not taken up by trekking poles, and can now be right under your head.

I would say that the tire is a bit intrusive, and I wouldn’t necessarily want to sleep with two people under the tarp, as is possible using trekking poles. That situation isn’t something I’ve ever wanted or needed to do – the FK Tarp itself is pretty light, even though it has a nice footprint. Tell your buddy to get their own! *wink*

The other side of the wheel has a lot of space to store any other gear that you could have possibly pedaled out with.

My last concern was how various handlebars would work with the conversion kit. Thankfully, the foam padding that’s used as an interface between the tarp and your handlebars is designed to work with various shapes/sizes of handlebars, from drop bars, to riser bars, to Jones H-Bars (my personal favs) and all manner in-between.

From my testing, there isn’t a significant amount of tension around this around (to my surprise), but if there are any particularly sharp edges in/around your handlebars, I would make sure they’re not in any way touching the tarp itself. They would act as a knife, cutting the fabric of the tarp itself. That shouldn’t be a problem though – why would you have sharp edges on a part of your bike that your hands rest upon?

I think the UD Bike/Tarp Conversion Kit is a solid piece – especially if you already own the Ultimate Direction FK Tarp. A tarp setup is my preferred shelter these days: they’re light, easy enough to set up flexible on how/where they can be put up, and do the job they’re intended for. The Bike/Tarp conversion kit adds minimal weight/bulk to the tarp system.

If I don’t feel I need protection from the elements, I simply don’t use the tarp at all, keeping it stowed. This makes setting up/breaking down camp faster. The weight of the UD FK Tarp is pretty light, so bringing it along, but not using it not that much of a liability, when compared to something like a full-on tent.

Some situations where I may seriously consider not bringing a tarp is a bug/mosquitoe-heavy locale. I’ll be guiding in the Gates of the Arctic National Park/Preserve next month, and I’m not sure if I want to risk tarp life for what may be a biblical amount of skeeters. If bugs are only a slight nuisance, there’s still ways around it, like using a bivy system that has a mesh net that surrounds the sleeper. The Ultimate Direction FK Bivy is one such system.

My rundown of my sleep system for The Highest Hundred project uses both the FK Tarp and FK Bivy as clutch pieces.

Good to hear that the bike has enough stability.

I do wonder if it would satisfy some customers (at least psychologically) to just tie two bowline knots for each side of the guylines directly around the seatpost. The Velcro is what would worry me the most (although as said earlier, happy to see that you found it very stable).