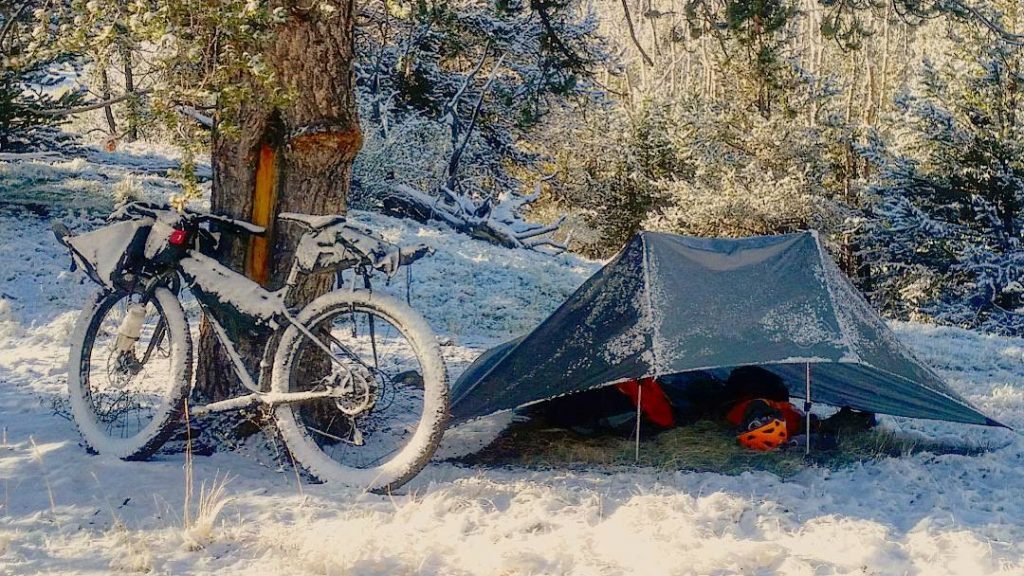 I’m presently in the Salida area, enjoying the incredible weather, tough training, and reconning potential routes. Salida and its people are incredibly friendly, bike shops and bike people are everywhere, and the mountains are crazy-accessible.

I rode here from Colorado Springs, having taken the bus from Boulder -> Denver -> Colorado Springs to save some time. It snowed about 3 feet last week, so some of the more interesting routes out of Boulder are currently under water.

Some photos from the bike ride,

Morning vibes underneath a bristlecone pine near Black Mountain. The area boasts bristlecones over 2400 years old . Contemplating my immediate future as I’m pretty sure the newly fallen snow has turned my route into the consistency of Nuttela. Happy – very happy to have packed the @ultimatedirectionusa FK Tarp + Bivvy, as I would have been SOL without it. . . . #bikepacking #bikecamping #bikeaneering #surlyecr #surlysociety @intergalacticsurlybikes #runwithud #bikewithud

#mudseason Revel in pushing a bike so clogged with peanut butter-sticky mud, the back wheel cannot spin and the drivetrain is choked. For miles. Beats working. Today’s goal is to not sheer off my rear derailer, and make it to Salida. In that order. . . . #bikepacking #bikecamping #bikeaneering #surlyecr #surlysociety @intergalacticsurlybikes

Yesterday, I recon’d a potential route from Shavano/Tabeguache to Cronin via the obvious ridgeline that connects all these mountains – in the Tour of the Highest Hundred, I’d also add Antero, but ran out of time/stoke to do it in this outing:

Between Tab. and Cronin, there are a few bumps and two named peaks – so it’s no gimme. My idea is that staying up high would save on elevation loss between Cronin and Tab.  On Tour 14er, after bagging Antero, I dropped into the Browns Creek draining to then go up a ridge on Tab’s north side, to reach Tab/Shav. Looking at my route from Antero – I have to be honest: it looked impossible – the distances and climb seemed just insanely too much. I really didn’t even know if a realistic route truly existed!

But, it went! I then dropped back down to Browns Lake, and slogged back to my bike via Brown’s Creek Trail, where I found it right after been destroyed by a bear! All my food, and many of my bike bags where consumed! Oh, the humanity.

I remember that day being very, very long, and my deproach on Browns, and then the Colorado Trail done in a zombie-like mode. Adding yet another mountain to this circuit doesn’t inspire a lot of stoke in me – can I even do it in a day push?

I’m almost betting that I won’t – in fact I think I would rather start this circuit not at the Colorado Trail/Little Browns Creek intersection, but rather as far up Little Brown’s that I can get that day (leaving the bike still  near Little Brown’s/Colorado Trail), bivvy, then push for Antero early in the morning – leaving  most of my gear at the start of my climb. After Antero, I’d grab my gear and move it a little farther towards Cronin to a point that I can drop into Browns Creek drainage, then bag Cronin with minimal gear again, to return to my stash.

With Antero/Cronin done, I can drop into Browns Creek Drainage, stash the gear once again, and bag Shav/Tab, then retrace my steps, picking up my gear. I still face the long slog out of Little Browns/CO Trail back to my bike, but I can stop whenever I please to crash out.

Mapping this alternative route where I don’t take the direct ridgeline from Cronin to Shav/Tab, only adds a mile and about a thousand feet of elevation gain according to Strava. This seems… really off to me – I think Strava’s route builder is lying about the elevation gain (see for yourself: v1 and v2 – those elevations graphs look… wrong)- there’s no WAY that the ridgeline doesn’t have more elevation gain/loss, as the saddle between Tab and Carbonate drops you to ~12,000′, and the Little Browns Creek drainage is ~11,000′.

This style for those longer linkups: bringing bivvy gear, and summiting most of the peaks with a tiny running vest with just the essentials to bag the peak in an out-in-back (basically a UL rain jacket, GPS tracker, phone/camera), then moving on to the next summit base, may be a method I employ more often than not. The alternatives are try to do it all with minimal gear, or break up the linkups to multiple trips. The former adds risk, the latter adds time/and major mileage.

There’s one main advantage: Flexibility. If I want to stop, I can stop. If I have to stop (I’m ill, or the weather turns terrible – which it does, often), I can  and it’s not such a big deal.

The disadvantage is hauling more weight – and I hate backpacking if truth be told: These recon missions are damn good at dialing in my gear, and I can already think of easy ways to improve:

If the sleep system can get around 3lbs (getting there…)  and my pack weighs 1.5 pounds (which it does), it’s not so bad to hike within the lower elevations on easy terrain. I’m beginning to understand that the more weight up in the higher elevations, where terrain is trickier is where having more weight really starts hurting. The less the larger pack weighs, the less disadvantage it gets you, for its perceived advantages.

I actually didn’t map out thinking this linkup of the four peaks was one of the bigger ones, but I’m changing my tune a bit. Rather than try to blaze through these linkups as fast as possible, I’m changing gears to really consider my overall strategy being one of optimization while keeping my overall (aerobic) effort as low as possible. I’m giving myself 60 days to complete this, and I fear burnout somewhere in the halfway point.